You are here: Home / Movies / Not a shipwreck: A review of the Island of Doctor Moreau

This is a 1977 film based on an 1896 sci-fi book by H.G. Wells. In the film Andrew Braddock, played by a young Michael York, washes up on a strange island run by Doctor Moreau, played by Burt Lancaster.

Braddock is welcomed and taken care of – but something is not right. The other people on the island are rather strange. Even if you’ve not read the classic it will quickly become clear that the natives are actually human-animal hybrids.

The book is about exploring the dilemmas around identity, messing around with nature and human responsibility. The movie touches on these as well but needs to keep a focus on tension and drama. Don Taylor, the director, does pretty well on this front. If you’ve not read the book then the plot will keep you guessing – not in the short term, you can safely predict things will go pear-shaped, but in the long term. What can – what should – Braddock do?

This is an old film, pushing 40 years, but the make-up is surprisingly good. It must have taken hours for the actors to get fully into costume. I imagine if such a movie was attempted today that it would be CGI. I’m glad of hands-on approach taken by the production team.

There’s an odd innocence to this movie. I guess that’s in part due to it being filmed in 1977 but also because of the age of the book. What do I mean by that? It takes the “hero” Andrew Braddock an absolute age to work out what was going on whereas any modern viewer, with our advanced understanding of science and what is possible, would twig within minutes. The relationships – even the romance – feel formal and polite. It’s odd but it even this goes to charm of the classic.

There’s a good reason why geeks would be especially interested in Island of Doctor Moreau. Moreau is a common candidate for popping up in steampunk and alternative history stories fairly often. In fact, Dave Elliott’s The Weirding Willows came to mind while I was watching. Now I’ll have to go back and double-check the doctor actually was in the book.

I’ve memories of watching Island of Doctor Moreau before. I’d certainly seen some of the scenes before. That said; this was definitely the first time I sat down to watch it from start to finish. Despite the age; I enjoyed it. This is a movie that’s matured with age. It’s better now with hindsight and nostalgia than it was when it was released.

Here’s a clip – with spoilers!

(My copy of the Island Of Dr Moreau was provided for review. 101 Films released the title on blu-ray in the UK in October 2014.

Not a shipwreck: A review of the Island of Doctor Moreau 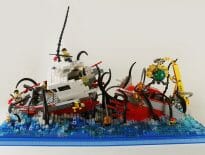 Geek Stuff Tentacles of LEGO errupt from the water! 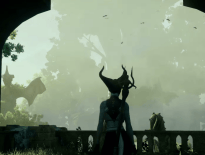