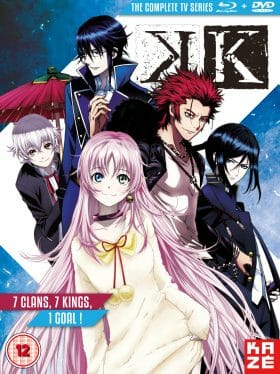 I really enjoyed K but in my I feared there wouldn’t be a sequel. The story leaves us with some big issues still to be sorted through and a greater understanding of a clever mythos that begs to be explored.

There is a movie, which I’m yet to catch, called K: Missing Kings, which sheds more light onto the world of coloured kings and it must have done well enough to earn a full sequel series.

K has done well outside of Japan; Manga UK picked it up as did Viz Media in North America and Madman Entertainment in Australia. The manga has a prequel called K: Memory of Red and another called K: Stray Dog Story.

The story is of rival gangs led by kings aligned to different colours and powers. We’re never sure whether our lead character is a goodguy or playing us along.