You are here: Home / Games / Tabletop & RPGs / We Are the Night: a Review of Blood & Smoke – the Strix Chronicle 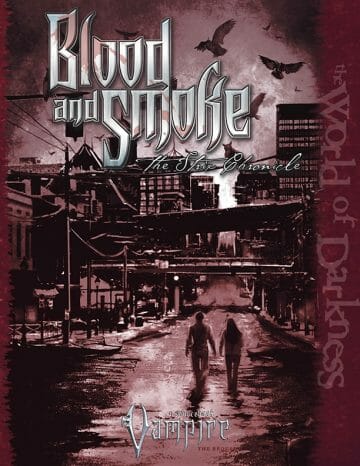 After getting my mind completely blown by the greatness that was Demon: The Descent, I decided I hadn’t had enough of the new, post-God Machine World of Darkness. And so I promptly double-clicked on my review pdf copy of Blood & Smoke: the Strix Chronicle and began reading.

Did I find more of the same excellent story-gaming potential found in Demon and The God Machine Chronicle? The answer is a resounding hell yes!

Blood & Smoke is the post-God Machine reboot of Vampire: The Requiem. Unlike Demon, however, Blood & Smoke doesn’t have any direct relation to the God Machine. Rather, this reboot is more about incorporating the mechanics of the God Machine Chronicle into White Wolf’s vanguard franchise. In addition to updating the mechanics, White Wolf revised the lore around these blood-suckers to become more game-friendly and less splatbook dependent.

They did this by revising the lore to include more intentional gaps that individual game groups can fill in. For example, the Camarilla, the Vampire Starfleet that ruled the undead world back in the Vampire: The Masquerade days, is now nothing but ancient vampire legend, its fall coinciding with the Roman Empire. Ancient, Biblical-era vampires who normal PCs couldn’t dream of opposing are “nerfed” in Blood & Smoke, down to a level players can relate to…or even aspire to. Most of the Kindred hierachy from previous editions of Vampire have now been condensed, streamlined, or relegated to exceptions rather than rules. The mean effect of this is to make this generation’s Vampire RPG much more approachable and playable, with plenty of room for Storytellers and their troupes to develop their own domains, politics, and plotlines without treading on years of published material.

But worry-not: you obsessive-compulsive types are going to find plenty of details in Blood & Smoke’s 300+ pages to completely goth out on. There are only five clans, but there are also six covenants, vampire philosophies that cross clan lines, and come complete with their own unique powers and backgrounds. Combined with the unique powers that come standard-issue with each vampire, the various combinations of clan and covenant can yield completely different kinds of Kindred. The possibilities for both hardcore roleplayers and hardcore undead number-crunchers are absolutely dizzying.

Special mention, of course, must be given to the Strix who grace the title of the book. The Strix are this generation’s Sabbat: creatures of shadowy smoke, unequivocally evil, made all the more so by their possible (probable?) relationship to vampires themselves. The Strix are both more and less than the Kindred; predator, prey, ally, and nemesis, all rolled into one. Leave it to White Wolf to make vampires morally-ambigous anti-heroes, and then give them even more morally-ambigous anti-anti-heroes to co-exist with. The Strix are more mysterious, terrifying, and ultimately more interesting than any other Kindred enemy of the past (to include the monsters from other WoD corebooks).

Long-time fans of Vampire are going to get a kick out of revisiting some of the old concepts that have made it into Blood & Smoke through the years, in various stages of revision. The Ventrue and Gangrel clans have made it all the way from ’91, as have Disciplines like Protean, Auspex, and Celerity. Long-time fans will also find comfort in the relentlessly-high quality of layout, art, and writing that’s been the hallmark of these games for all these years, as well. As I wrote in my review of Demon, World of Darkness books, at their best, are as much novel as they are rulebook, and can be read as such. “Fluff,” at its best an endearing term, is an insult when talking about a White Wolf book.

To find fault in Blood & Smoke, one has to look very closely and be very nitpicky. I still wrestle with White Wolf’s decisions in handling the presentation of their new world. Blood & Smoke is a standalone book, technically requiring neither the World of Darkness corebook nor The God Machine Chronicle. However, I imagine this book could be a tough pill to swallow for fans picking up this book without experience in either of those. Paradoxically, a conservative fan of the line may be disappointed to find so many pages of Blood & Smoke wasted on rules and concepts that are already covered in books they’ve already purchased.  To underline my point about how confusing this can be, the very cover of Blood & Smoke says “A Sourcebook for Vampire: the Requiem.” I haven’t read the Requiem, and now having read Blood & Smoke cover-to-cover, I feel I fully understand this game and could play it without ever reading a single page of the book Blood & Smoke is supposedly a sourcebook to!

So it falls on reviewers like me to set you straight: go buy Blood & Smoke immediately! If you are new to the World of Darkness, Blood & Smoke has everything you need to play. It will be a challenging read, but completely and utterly fascinating, and well-worth the effort. If you are a former WoD junkie, Blood & Smoke takes everything good about their new, rebooted setting and puts it in motion with one of its most successful game lines. It’s absolutely worth a read. The combination of old and new within the pages of Blood & Smoke strike a fine balance: fresh and new, but still undeniably the same World of Darkness flagship game that’s been on bookshelves for over 20 years. If only the rest of vampire pop culture could so completely and successfully reinvent itself.

(My copy of Blood and Smoke was provided for review.)

We Are the Night: a Review of Blood & Smoke – the Strix Chronicle 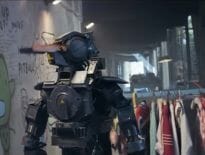 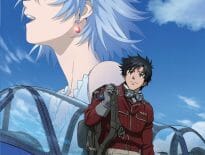