You are here: Home / Books / Dark cowboy horror: A review of The Shotgun Arcana 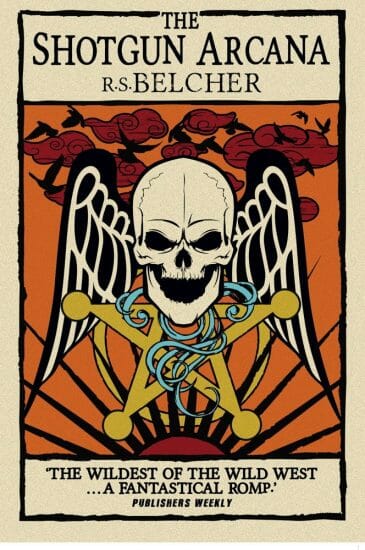 One of my favourite reads of last year was R.S. Belcher’s Six-Gun Tarot. I recall playing around with words like “Steampunk” and “Lovecraft” to describe the occult western. In the head I mentioned Cthulhu, the Deadlands RPG but not steampunk. I’ll stick to my guns for The Shotgun Arcana.

There’s less Lovecraft in The Shotgun Arcana. We still have the mythology behind the series – one that goes back to great old one level drama, if not before – and a creepy skull the horror here comes from the army of cannibals riding into the town of Golgotha. This is less Lovecraft in style and rather more Richard Laymon.

True, some of the technology feels “steampunk” given that we’re dealing with the occasional mad scientist out in the wild west but we’re up to the danger of electricity here. It’s more Frankenstein’s monster nuts and bolts than steampunk gears and cogs.

There’s also a pirate queen, a deputy that’s not quite a werecoyote, a fallen angel, Chinese assassins, a sheriff who has been hung three times already and a whole host of interesting characters.

Whereas The Shotgun Arcana feels a little different to Six-Gun Tarot it’s very much an evolution. Belcher seems more confident in his world, the differences are richer and firmer and his writing stronger, darker and more direct.

There are new characters and the growth of old characters. Constance, the young lady who was something of a damsel in distress, steps up her game. Jim, the character who introduces Six-Gun, is equally good. The good guys get themselves a Pinkteron agent too. If there’s a third book I predict a romance.

Given that one of the characters in Six-Gun has been keeping the reanimated head of his undead wife in a far the issue of whether any of your favourite characters survive the cannibals onslaught is a tricky one. Who was alive in the first place? Suffice to say there are plenty of threads of danger and “oh no” in place to make any third book a great one.

The plot allows – demands – a host of new baddies. These people are freaks. We get to spend so little time with them. There’s an introduction to a few of the headline villains, an encounter to chill you and then the nod that this horror is also on their way to Golgotha. It’s a shame that there’s not a book for each.

If you’re not a fan of lots and lots of characters then, yeah, I grudgingly suppose that The Shotgun Arcana might throw you at times. A lot happens. The action bounces around across paragraphs rather than chapters. This is especially true in the latter half of the book when the drama is high. I loved it though.

(My copy of The Shotgun Arcana was provided for review. The paperback was published October 31st, R.S. Belcher and Titan Books.)

Dark cowboy horror: A review of The Shotgun Arcana

Interviews Vow of Honor offers a world full of dishonor 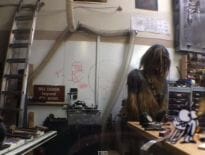