You are here: Home / Games / Tabletop & RPGs / New Lord of the Rings RPG on the way: The One Ring

Hot off the success of The Doctor Who: Adventures in Time and Space Roleplaying Game – which was the highest ranked RPG according to Diamond in December – Cubicle 7 have another simply breathtaking license.

Is Lord of the Ring the Holy Grail of fantasy RPGs? Sure; it’s been done before but it seems certain it can be done again.

The new RPG comes to us via a Sophisticated Games deal with Cubicle 7.

It’s actually Sophisticated Games that has the RPG license for LOTR. They got it when they won the rights to do Lord of the Rings book board games. They sought Cubicle 7 out to help make the traditional RPG the success it will need to be.

The third name of note is Franceso Nepitello. He’s the lead writer and designer on The One Ring: Lord of the Rings RPG project.

Nepitello is a games biz vet and has already had great success with the War of the Ring strategy board game; something he designed alongside The One Ring co-designer Marco Maggi and Roberto di Meglio.

“We’re tremendously excited about The One Ring,

“Our aim is to give our audience an authentic Middle-earth gaming experience, one that really captures the feel of Tolkien’s world.”

“When we first acquired the rights from Tolkien Enterprises to publish this RPG – as part of our wider LOTR book based board game license- we had no hesitation in approaching Francesco to conceive a completely fresh LOTR and The Hobbit RPG, and for him to be the writer. We knew that he possessed both these skills and that the game would be in very safe hands. His presentation of Middle-earth, along with stunning artwork from John Howe and others, brings this incredibly evocative and exciting world to life.

“We also approached Cubicle 7 to be our publishing partners on the new The One Ring RPG because we loved the quality of their previous publications and felt that Dominic and Angus (Abranson) had both the experience, and with the creation of Cubicle 7, the role playing game resources, to bring LOTR and The Hobbit to a very wide audience.”

It is expected that The One Ring: The Lord of the Rings RPG will be published in the second half of 2010. 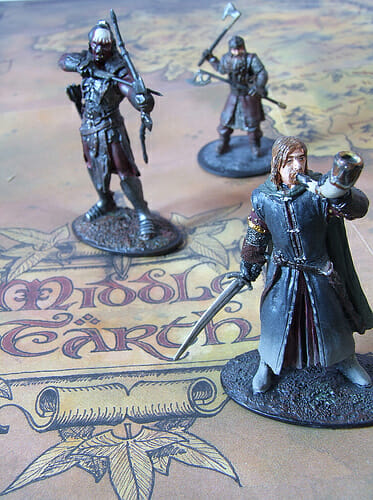 New Lord of the Rings RPG on the way: The One Ring