You are here: Home / Games / Tabletop & RPGs / Wizards rewrite the plan for Magic: The Gathering 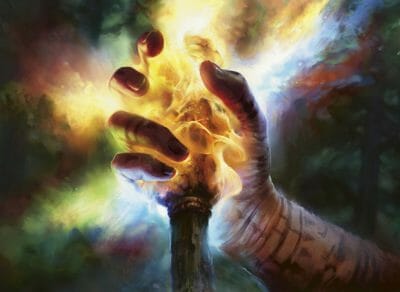 Wizards of the Coast will bring in significant changes to the way Magic: The Gathering is run. These are not changes to the rules as such but a change to how cards are released.

Starting in the autumn of 2015 the company will move away from releasing three blocks followed by a core release to simply releasing two blocks, twice-a-year format.

Wizards hope that the new two block, twice-a-year format, will ease concerns and problems around the constant reinvention of the game. Magic head designer Mark Rosewater talked about the struggle to balance the needs of current players while bringing in new players. They need to keep the “metagame” fresh. They need to ensure people remain excited for the third release, in the old format, after already having two releases.

Since the beginning of the block structure (Mirage block, way back in 1996), the third set has always been a problem child. It needs to have enough cohesion to feel as if it belongs to the block, but it has to have enough differences that it manages to spark the interest of the players, who have already been playing the environment for seven or more months.

The new format means there’s no need for the core set, according to Wizards. This means that Khans of Tarkir will be the last of the three blocks and there will be an impact on how long cards from that set will be legal for Standard format. Without the core set in the new format, the rotation of Standard format cards will ve every 18 months rather than 24.

In his Metamorphosis article, Rosewater discussed the challenges of the core set;

Who exactly is the core set for? If it’s for beginners, why do we only put it out during one point of the year? Is that the one time we expect new players to start? And why do we keep adding new cards and bringing back mechanics? The beginners don’t need any of that and it only leads to making the set more complicated.

The “Blood” set in autumn of 2015 will be the first in the new format.

You can read more details about the change and why Wizards have made it on magic.wizards.com.

Wizards rewrite the plan for Magic: The Gathering