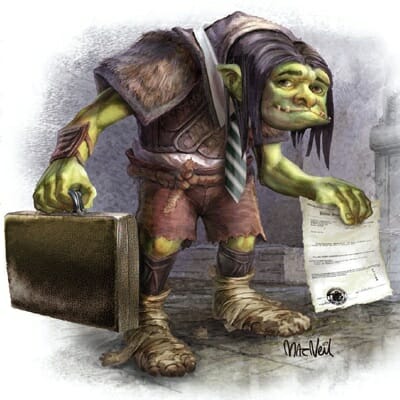 The American patent system is well known among techies – and not for good reasons. This is the entity that granted Amazon a patent for taking photos against a white background.

Right now the US Patent and Trademark Office is considering giving a small publisher the patent protected rights to convert entities (PCs, Monsters, NPCs, stats, weapons, etc) from one genre to another.

For example, moving your Beyond the Supernatural character to Rifts would become a patent protected right. Exploring universes in Monte Cook’s The Strange might also come under the patent. The list goes on.

The issue came to light during a Q&A session on Dan Davenport’s #rpgnet channel. It was then blogged by Bedroom Wall Press. The full transcript of the conversation can be found at GM Shoe but here’s a relevant snippet.

AJ Schmidt isn’t telling tall tales. You can find the application for the patent at the US PTO.

In theory the patent office might block it. Bedroom Wall Press are sceptical this will happen. I am as well. There’s too much history against the USPTO for anyone to be hopeful.

Whereas gamers and publishers may have reason to be concerned I note there’s been some hostile comments to Universal Horizons. That’s hardly the way forward either. Writing in a Facebook update this morning the publisher said;

The patent issue: I will respond, but will continue to delete negative, derogatory, or flaming comments. This is our FB page. We cannot shut down anyone’s favorite game or redefining water as was earlier suggested. The sky is not falling, designers are free to create very dynamic RPGs and systems. Please read and understand:

We are a small company that invented a very specific process for shifting characters through genres, and we want to protect it using a patent. We consulted a lawyer who confirmed the same and encouraged a process patent. We want to protect the process we invented.

Many are commenting on the abstract that uses abstract language. The details of a patent are referred to within the cited definitions and the main book. This does not affect any previous publications or any other future publications that do not copy our process.

In a comment on the same thread, Universal Horizons indicated they won’t sue other publishers should they win the patent.

We witnessed the craziness of copyright infringement with Gygax and many smaller companies from larger game companies. We sought the consult of a copyright/ patent attorney. He informed us patent law protects better than copyright law. After his research, he informed us our method of character conversion was unique enough to the patented. Thus we sought the patent to protect our idea. Your insight is right-on. To be clear: we will not attack, sue, or investigate previous/ current game systems for infringement.

The desire to protect your ideas and avoid being ripped off is understandable. The question is whether the patent approach is the right way to go. What do you think?

Update: It would be useful if a patent expert/lawyer popped up with some insight. In particular: does is patent exclusive to or inclusive of the role of a computer?

They started off with a supply of good intentions. I believe that. However, they hired a lawyer who used those good intentions to pave a path for them — and look where that led.

The method is literally “look at stats in one game, come up with a way to convert them to another game, make the character is the other game”. How else would you do it?

That’s wonderful.  When they go out of business and their patent is bought at auction by some wretched patent troll who uses it to bludgeon the industry, it’ll be lovely knowing that they originally meant well.

AaronHarmon With you 100%. It sounds like they may be trying to lock down the math they use to do it. Pretty sure you can’t sue people for doing math in any particular way.

mike_acton Fucking gross. Hope that’s a misinterpretation by AJ or something.

mike_acton GeekNative Oh, American Patent Office. Y u so troll? Seriously, hire people that can keep up with technology please.

mike_acton GeekNative seems important to note it is intended as a defensive patent. I’m not condoning, but it’s diff from patent trolling

ValidUsername That’s my concern to. I think their intentions are fair (as @kylnew states) but what happens if someone else acquires the patent?
Equally; kinda of odd that the whole hobby hinges on such things.

kylnew mike_acton One concern is that the patent will acquired by someone less defensive.

GeekNative mike_acton absolutely. Which is a real concern, but not exactly the agenda of the party in question. System still broken.

The only actual mechanic that I know of with protection is “tapping” in MtG.

“we will not attack, sue, or investigate previous/ current game systems for infringement.”
1) Then why get a patent
2) If a “previous/current” game system would infringe, then their system is not unique nor patentable.

GSLLC it will not stand up under public or peer scrutiny.

BenjaminRogers  The reason for the patent is to protect against FUTURE infringement, using their specific process (which is only useful inside their game, or one copied from it).  Since it only affects conversions similar to that of their gaming system, previous systems (which would not be similar, or else the patent would not be granted) should not be affected.

Darkskullstudio Perhaps true, but neither the public nor fellow game designers get to make that determination.

I am not a lawyer, but I have read many many game patents. I don’t think this one is egregious (though I also don’t see that it is worth much). They appear to claim a particular process for converting the stats, skill, race bonuses, and equipment bonuses from one game to another game. This includes mapping a skill in game 1 to multiple skills in game 2, vice versa, and keeping tabs on a skill that is currently useless in game 2 but may come to be worth something in a future version of the game. The stated intent is… Read more »

It’s been awhile since I had a look, but back in 1992 the late E. Gary Gygax had guidelines on converting characters from other games to the then new Mythus. Anybody has a copy, they can find it in an appendix.