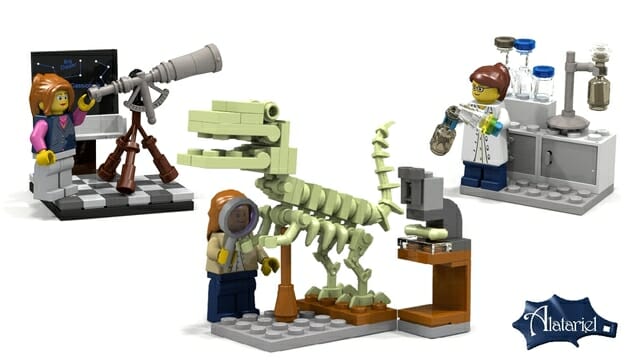 After thinking about it for a while – LEGO’s decided to go ahead and produce a set of female scientist minifigure sets. We also get dinosaurs in the set. Well; a dinosaur skeleton anyway.

LEGO picked these figures from suggestions given to it via LEGO Ideas and put the concept through an internal review process. It is the sort of process that would look at the size of the market, worry if Creationists would demand LEGO boycotts, whether that was already a similar product, etc. It took a while but the female scientists were approved and beat off a challenge from a Sherlock set, Macross, The Legend of Zelda, a remote controlled DeLorean and Adventure Time.

The final set might not exactly like Alatriel’s proposed designs but will hopefullyy not be far off.

PC Bored at work? Explore a random dungeon in your br…

Geek Stuff Is it time to dragon up your hair a little?
💰 Copper Coins 💰 Geek Native is an affiliate and may earn commission on purchases you make from third-party sites.
🍪 Privacy & Cookies 🍪 The site uses cookies to survive. By accessing the site, you agree to use your browser to control cookie use or take 1d4-3 privacy damage (tracking). If you defeat cookies via ad blocking, please consider the Patreon. An intro to cookies, and how to control them, can be found here. I Manage Cookies