You are here: Home / Games / Tabletop & RPGs / Steve Jackson Games puts Scott Haring at the wheel of the next Car Wars 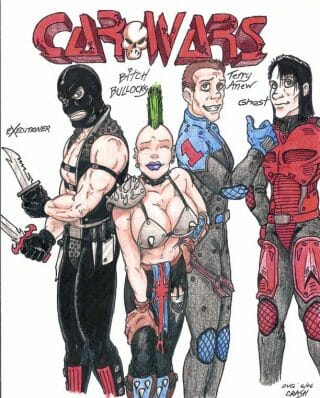 Car Wars is coming back and Scott Haring will be in the driver’s seat.

Steve Jackson Games first released Car Wars back in 1981. The vehicle combat simulation was set in a post-apocalyptic future with players driving everything from motorcycles to tanks, heavy with weapons and with the simple goal of survival.

The original game used card stock. I’ve played it with Micro Machines on an old tabletop cover meant for a model railway and it was a huge amount of fun. The game has had a number of editions since Chad Irby and Steve Jackson’s first edition and was last published in 2002 as Car Wars 5.0.

Scott Haring was the developer of Deluxe Car Wars and will be the line editor of the latest. Steve Jackson Games offered up a Kickstarter-backed edition of Cars Wars as part of the Ogre Designer’s Edition campaign of Kickstarter. Ogre nearly hit $1m in funding (asking for only $20,000) and the Car Wars Kickstarter stretch goal unlocked at $700,000.

Steve Jackson Games talk both about launching a Kickstarter project for Car Wars and about releasing the game in 2013. Here’s the exact quote from the Ogre Kickstarter.

$700,000 – GOAL ACHIEVED! – Drive Offensively! We will launch a Kickstarter project for Car Wars! We *think* this will turn out to be a refinement of Car Wars Compendium 2.5, but you’ll tell us. Our supporters at the [new] $23 level and higher will be invited to join an exclusive Car Wars forum, where we’ll build the new edition from the ground up – issues like “which classic cover do we use?,” “10 phase, 5 phase, or 3 phase movement?,” and “do we include boats?” Once the project launches, surveys will be open to the public, but only supporters of the current project will get in on the preliminary planning. And we’ll take everything we have learned from our Ogre Kickstarter project to make the Car Wars project even better. If we make this goal, the private Car Wars forum and surveys will launch before the end of 2012. The game will be published in late 2013.

(PS #1 – And we will add staff as necessary to make sure that the Car Wars and Ogre projects don’t compete for attention!)

(PS #2 – To make sure this is clear: Supporters of Ogre are not receiving a copy of the new Car Wars. You’re just making us DO it. Thank you . . . we think!)

In an email to press, Brian Engard the Hipster Dice Line Editor and Marketing Assistant at Steve Jackson games noted that the first step would be a re-release of Car Wars 4th Edition and the Mini Car Wars starter pack. Meanwhile, Haring will begin to work with the dedicated autoduelling fans from the Kickstarter to bring the Car Wars experience back.