Here we have another unscheduled look at anime series both old and new. In Irregular Reconnaissance I share mini-reviews of anime that’s won my time recently in the hope they’ll help guide your choices.

Anime fan too? Found something good to watch recently? Share your thoughts and reviews in the comments below. 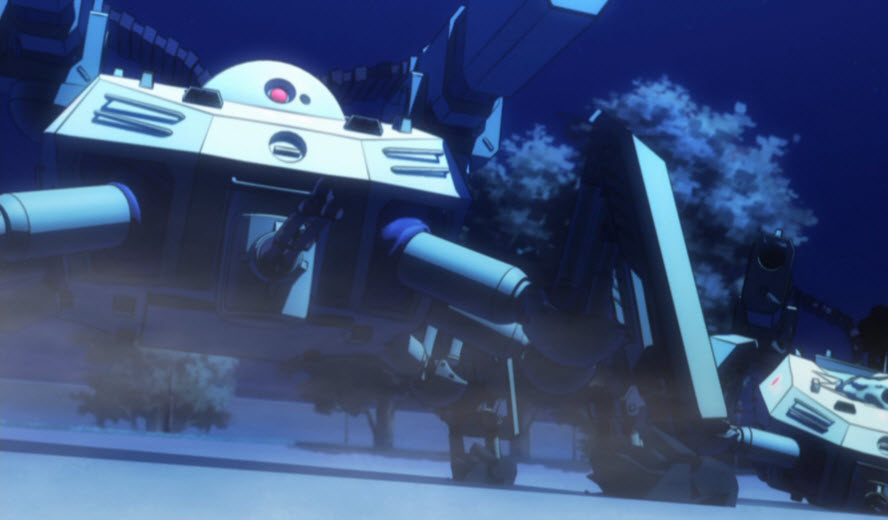 I suspect I’m going to whisk through this series as fast as I can. It’s stunning and so far the plot has been very clever.

It is the near future but mankind has lost control of the seas. Out of a strange rolling fog a hugely powerful naval fleet appeared and simply smashed the combined forces of man. The result means countries are cut off; communication is hard as satellites have been shot down. The Fleet of Fog is running the show.

The anime starts as the first glimmer of hope appears for humanity. For reasons unknown a submarine defects from the Fog, with no memory other than one order – to find her human captain.

I’m using “her” for the I-401 because some of the Fog ships have manifested a body and are developing thoughts beyond that of a thinking weapon. The I-401 manifests as a Japanese girl who uses the name Iona.

I’m particularly impressed by the naval tactics on display so far. The sea battles are interesting. 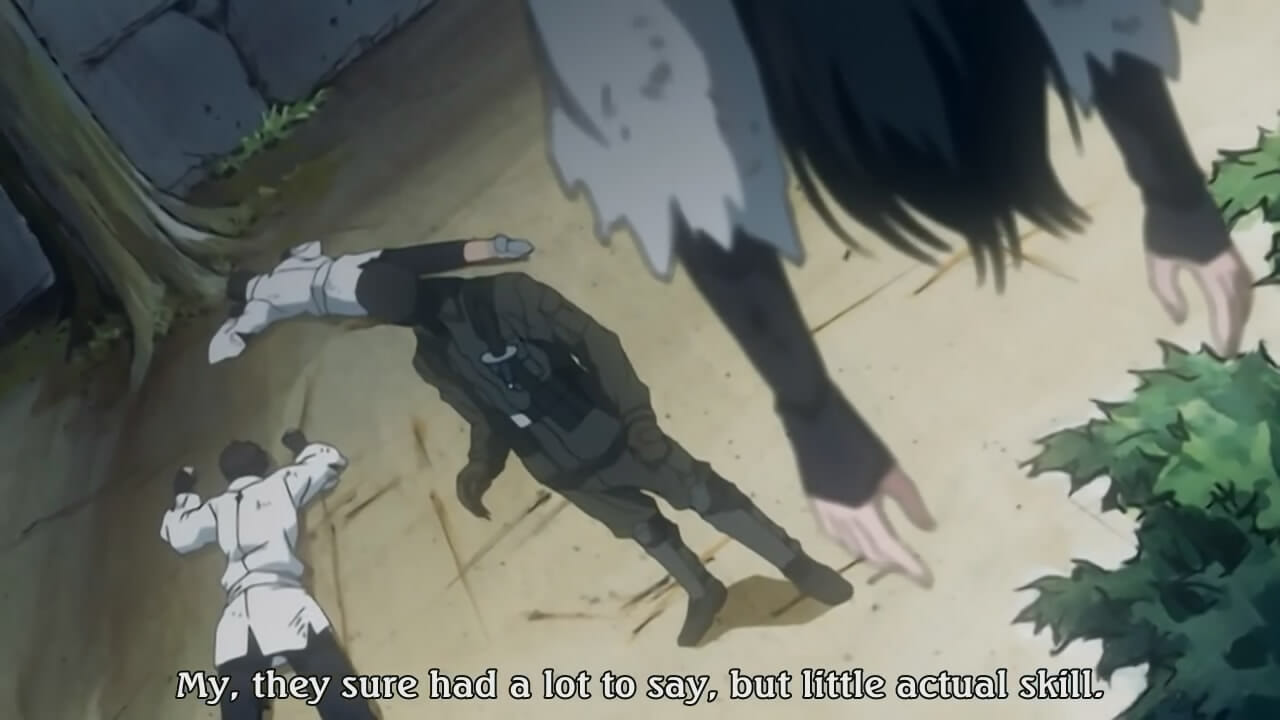 Not sure about this one but it’s early days yet and the visual style is charmingly different. At times it is like looking at a light illustration and that’s a contrast to the bold, tight and forceful inks you tend to find in anime.

Miharu is an apathetic school boy. Early on we see him nearly tumble off a tall wall but even that doesn’t seem to bother him. I’d wonder if his apathy would be a mental condition had it not been for two things. Firstly, sometimes he winds people up – and this is shown by little devil wings appearing on him so you as the viewer can see he is being cheeky. Secondly, he contains an all powerful hidden Ninja art that the villages are about to go to war over. From what we can see this sentient power latches on to your desires so perhaps there’s a strong reason why Miharu seems to have none.

There’s a lot to like here aside from the art. I like the mix of Ninja hiding in a modern world and the battles between the villages. The problem is the lead character – the apathetic twit isn’t (yet) very likeable. The fact that he gets bored halfway through someone’s speech and wanders off is a joke you only get to do four or five times.

Status: Uncertain, likely to watch more and report back.
Where: Crunchyroll | Amazon 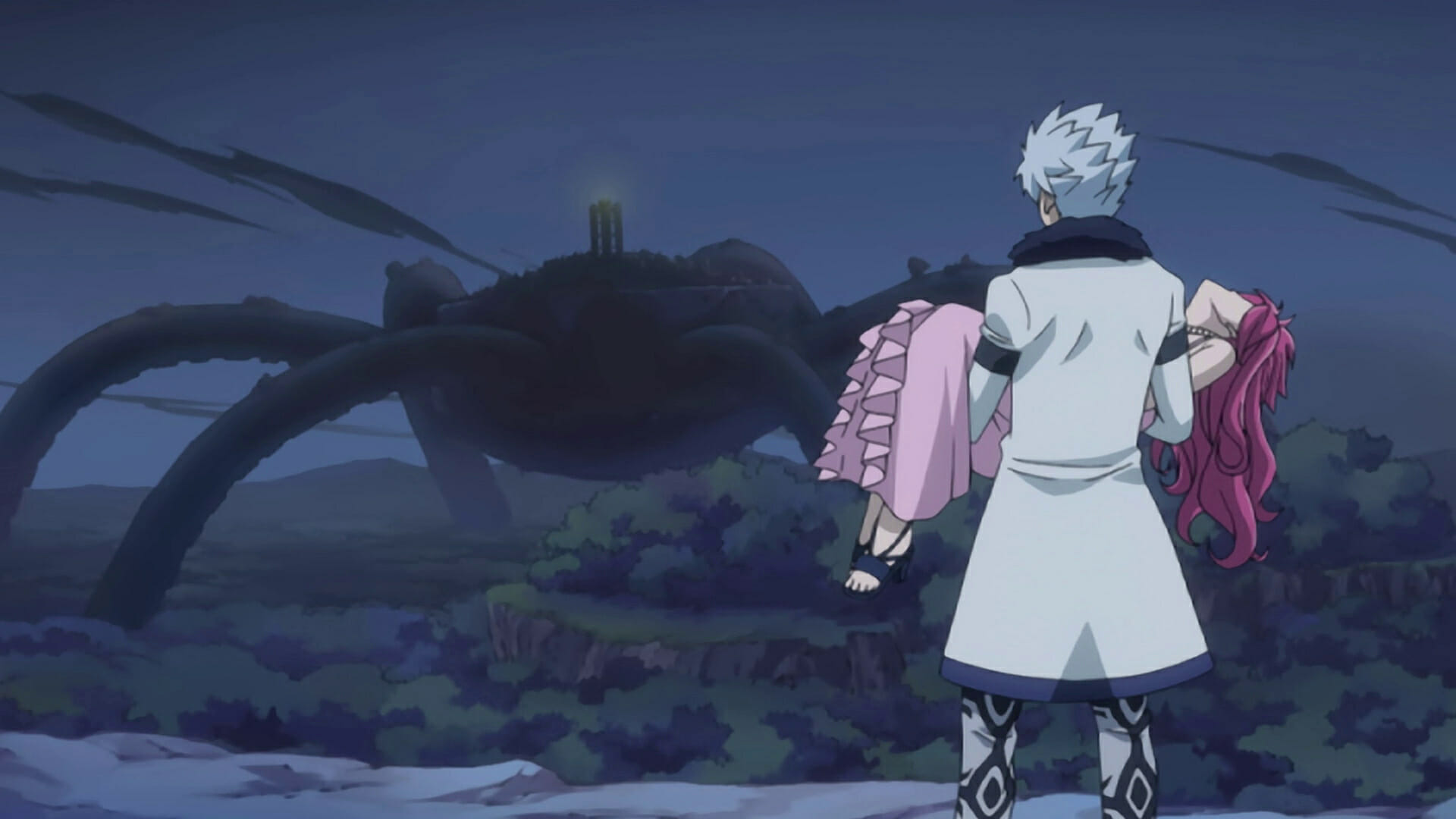 Hi-octane magical adventure. Fairy Tail at this point is about powerful wizards battling over even more powerful ancient relics and weapons.

There’s humour here and the occasional tease of fan action but never enough to detail the drama.

Most of all Fairy Tail thinks carefully about foreshadowing. To keep the plot rolling there needs to be another threat and with this degree of power in play that type of menace can’t just appear from space (ala Dragon Ball). 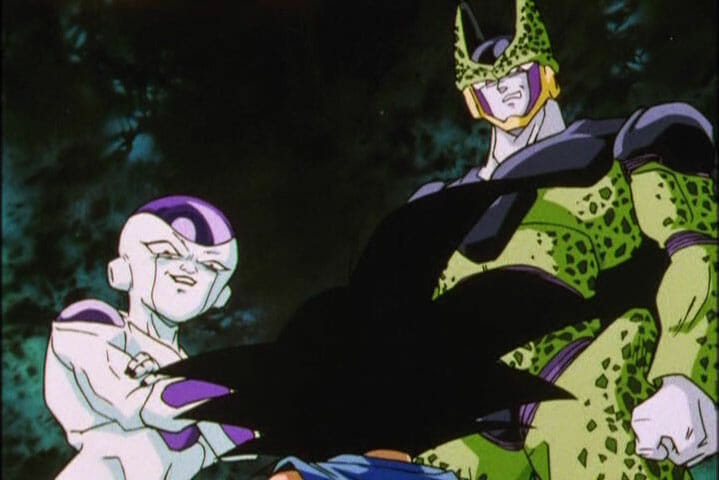 We’re watching the last of Dragon Ball as we’re move through this collection. For fans of the series this means getting to encounter the final evolutions of characters and older villains and gauge how powerful they’ve become.

Some credit definitely goes to writing a script that allows returns of key characters while keeping things fresh. That said Dragon Ball GT makes no attempt to be a “thinkers anime.”

Watch this to watch mega punch power attacks square off.

Status: A classic.
Where: Crunchyroll | Amazon 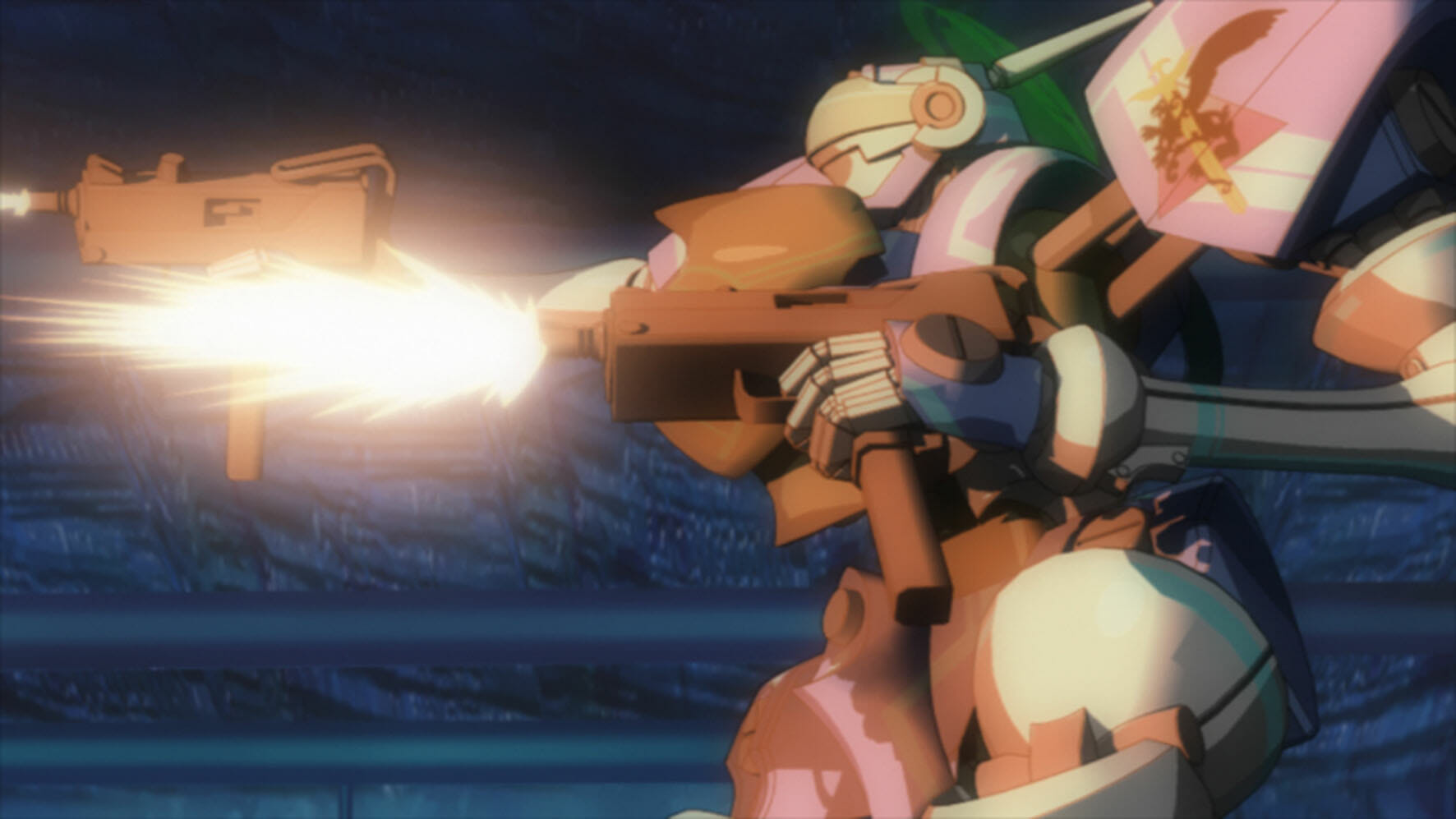 The twist and turns continue and you’ll start to wonder whether there are any good guys or not. In addition Baldr Force EXE plays that the “hero lost his memory” card in order to spin some more drama.

At this point I was willing to accept all the plot twists at face value and settle back for the avatar battles. Baldr Force EXE manages to keep us supplied with reasons for battles to happen.

While this isn’t tie premier league of mech or hacker anime Baldr Force EXE passes the time without falling flat on its face.

Status: Neutral, one for genre fans
Where: Crunchyroll | Amazon

The Tower of Druaga (The Aegis of Uruk) 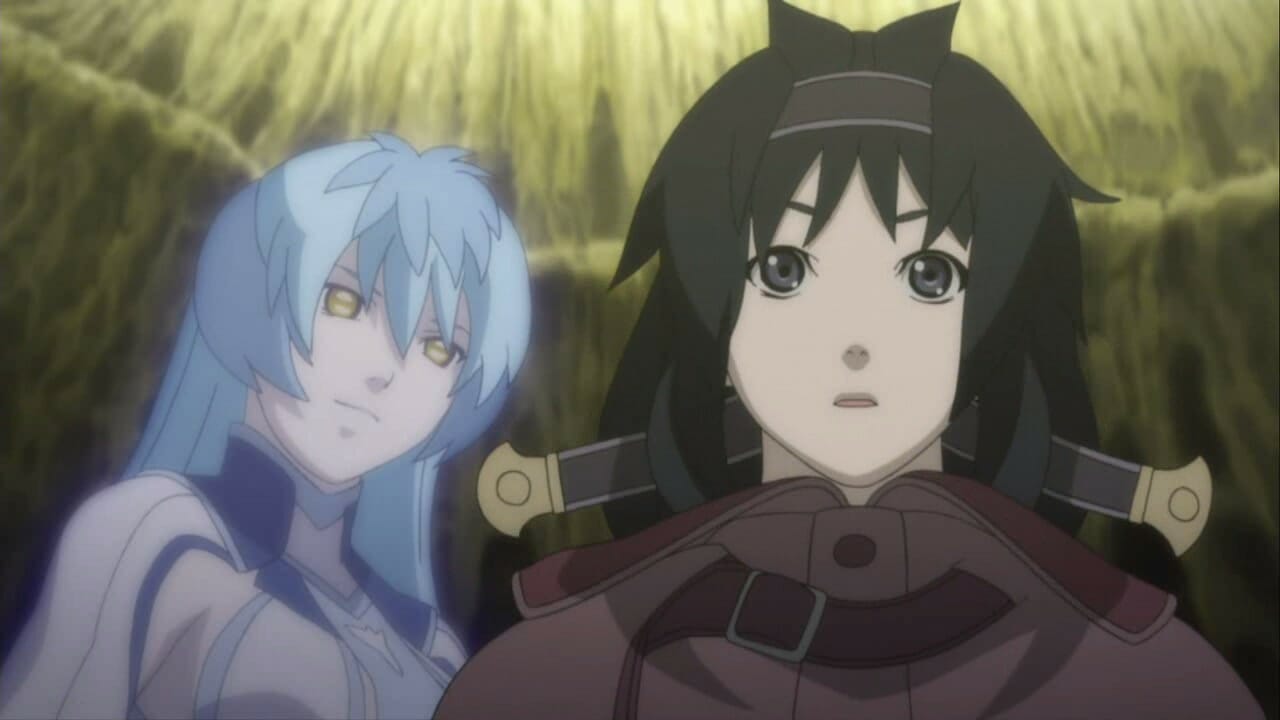 There are bleak moments when favourite characters are dying that it is hard to remember that The Aegis of Uruk began with a zany comedy episode. The comedy persists in the first half but fades away as our climbers end to the top of the tower and their likely battle with the dark god Druaga.

In hindsight the first episode is there to parody your expectations and then the remaining 11 set about stripping them away. Sure, there’s still banter between the characters but the danger and drama gets very real.

The sucker punch right at the end us brilliant. Bring on part two – The Sword of Uruk.

Status: Recovered from a weird start
Where: Crunchyroll | Amazon 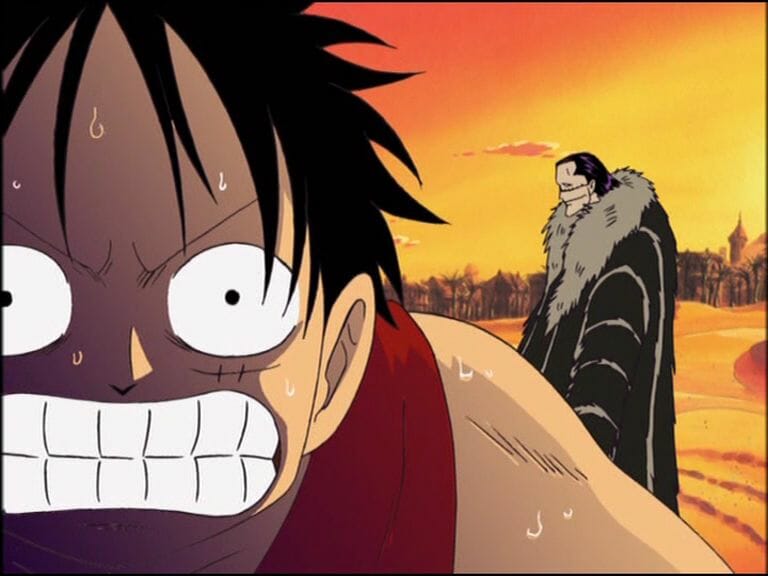 Crazy hijinks and pirate action in a fantasy world. One Piece is hugely popular in Japan for a reason. It’s fun.

For these episodes of One Piece I prefer to enjoy then via a form of geek osmosis and that meant having friends around to play Settlers of Catan while this played in the background.

Status: Not for everyone but still a classic.
Where: Crunchyroll | Amazon

Tabletop & RPGs 27 expert tips and techniques to bring your fantas…

Geek Stuff Steampunk Stormtrooper cosplay
💰 Copper Coins 💰 Geek Native is an affiliate and may earn commission on purchases you make from third-party sites.
🍪 Privacy & Cookies 🍪 The site uses cookies to survive. By accessing the site, you agree to use your browser to control cookie use or take 1d4-3 privacy damage (tracking). If you defeat cookies via ad blocking, please consider the Patreon. An intro to cookies, and how to control them, can be found here. I Manage Cookies