You are here: Home / Music / A Look Inside: Airship Pirates 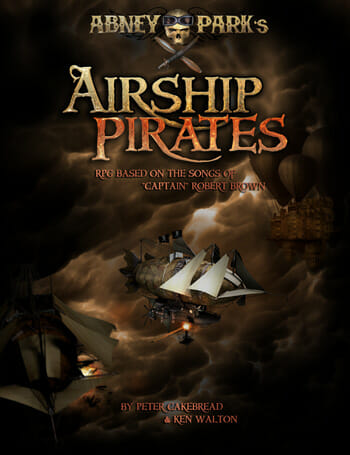 This week we are celebrating International GM’s Day and we’re not alone. DriveThru RPG run their biggest sale of the year this week.

Here’s an idea. If you wanted to find a brand new RPG, not a sourcebook, supplement or set of art in the sale and you wanted to take advantage of the discounts what is the largest amount of money you could save? What’s the biggest real cash discount? The answer is $49.99 reduced to $34.99 for Cakebread & Walton’s Airship Pirates.

Currently on DriveThru RPG Airship Pirates has an average rating of 4.5 out of 5. It looks good. This is a game set in 2150 and after the Earth is recovering from the Great Apocalypse of 1906. We’ve steampunk sky-cities, beast-haunted wastelands and armoured railroads.

In the walled, smog-shrouded cities, people huddle in forced Victorian squalor, lorded over by the upper classes, while the Emperor’s clockwork policemen patrol the streets and the ultimate threat of the Change Cage hangs over those who would rebel.

Who knows, maybe you can screw up the timeline some more?

This is an RPG inspired by the music of Abney Park. You can sample some of that music at the bottom of this blog post – but first you can sample the RPG. The embedded PDF is a full 40 pages of the RPG and the accompanying text extract is the first two.

The Trials of Admiral Villiers

It wasn’t an elegant sight. Vermin was sprawled in the chair. Strain as he might, he wasn’t going anywhere.

“Tell me. Where are they hiding?”

The request was simple. The voice clipped. Cultivated.

Almost, but not quite, gentle.

Vermin thrashed to the side, trying to get a glimpse of the speaker. But to no avail. His bonds were too tight. Anyway, the inquisitor was overshadowed by the looming automaton.

“Tell me,” the voice demanded.

“I’m telling you nothin’, you scurvy dog.” Vermin spat, blood and tooth mixed in with the viscous mess.

The inquisitor stated it as fact. Vermin fell silent. His anger had le& him. He slumped once more, defiantly silent.

The automaton didn’t need to be asked twice. Where a man should have hands, the Peeler had malevolent whisks. Cruel barbed things. Abhorrences. They whirred into life and the peeler stepped forward.

The Admiral looked at the broken pirate.

“Get him a physician. Mend him, as best you can. Then have him moved to the Change Cage. It would be a shame to deny him our hospitality a&er he has been so helpful.”

Content that the Peeler would follow his instructions, the Admiral le& to ready his ship for action.
***

Sir Roderick Strickland-Villiers, an Admiral of the Imperial Air Navy, was satisfied. He had the information he needed.

It was an understatement to say Villiers had been frustrated these past few months. His squadron had been disbanded. His flagship, the Invincible, set to nurse-maiding duty – guarding munitions factories in the northwestern blocks of the great Change Cage city, Desolation. What was his Emperor thinking? The old man was losing it.

Villiers had a fresh mission at last. And he had forged it himself. There was only one thing that mattered more than iron discipline in the Imperial Air Navy. Success. He would catch the freebooting rebels. Success in the matter was his ticket to freedom. Freedom to roam the skies as a pirate hunter once more.

The HMS Invincible was swiftly readied for flight. The mighty vessel lifted, leaving behind its mundane patrolling duties, a task so below its station as to be derisory. The vast city below began to shrink, although her limits were still not visible. The airship would hardly reach any height, hopping across the desert, before beginning her descent. Her target, Isla Aether, was but a short journey away, shrouded in the nearby mountains.

Villiers was quietly pleased at his men’s efficiency. He had brutally inculcated in them the need to perform their duties swiftly, diligently and without question. His bullying seemed to have paid off.

The Invincible was a fine ship of the line. A frigate, she fielded forty guns and had a crew numbering over one hundred and fifty, not including the huddled Air
Marines. They would be confined below decks until their services were required.

Formidable indeed. More than a match for any pirate hulk. She displayed the gold inlaid, green flag of the Emperor, fluttering high above the Desolation City ensigns, all in turn tucked below the vast primary gasbag. Any Free Peoples sighting the Invincible could only wonder at her majesty. And hope she wasn’t coming for them.
***
The senior pirates were unhappy, if not outright mutinous. They were sat around a large oak table, in a sleazy underground bar. They were imbibing vast quantities of grog, as pirates are wont to do, snacking and qua’ng as they debated the consequences of Vermin’s capture.

“I’m just saying, we are putting a lot of trust in Vermin. He wouldn’t be the first to be broken by the Peelers. And he won’t be the last.”

Raven-Skye Onbesonge stated what they had all been thinking. Onbesonge was a talented navigator, but she was new to the Fancy and still had to win over her crew. A tarot reader and dancer, there was something about her exotic demeanor that hinted of darkness. The last thing Grey wanted was for his crew to reject the Tortugan.

The Fancy’s Captain frowned. Doubts a&er the event would do them no good at all.

“Come, Raven-Skye. Have some faith in your shipmate. If we can’t trust each other, we are nothing.”

“How can we trust each other? We’re bloody pirates!” interjected Hinto. The burly strongman looked at his friend dubiously.

“We live by the code and we’ve sworn our kinship.”

Now irritated, Captain Grey turned on Hinto. “I hope the enormity of our pact isn’t lost on you, Hinto. You are my right hand.”

Hinto was rescued by Rory. Rory Begg was a clown, acrobat, gadgeteer and the Fancy’s trimsman. Given to flashes of brilliance, he was as prone to calamity as
he was to success – a worrying trait, considering his responsibilities included keeping the Fancy airworthy.

His voice traveled down from the ra&ers. Rory was hanging upside down, swinging back and forth as he spoke.

“It isn’t about loyalty. Its about how savage those bastard Peelers can be. And are we really pirates? We’re a passable circus troupe, for sure. But we’ve hardly made our mark in the world of piracy.”

Grey sighed. Bernadette kneaded his shoulders, trying to soothe him. Bernadette Neuf would do anything for her Captain. She despised her own willingness to serve, she knew it was a function of her programming, a hangover from her doll days. But she placated herself with the thought that at least she was serving a good man.

Grey spoke patiently, as if to children.

“We may not have the fame of the Ophelia. Or the menace of Kingston Hairyhand and his terrible cutthroats. To be sure, we haven’t even the reputation of Frinter “The Gentleman” Maguire. But we are pirates!”

He was now animated, passion filling his voice.

“And what’s more, we have something the Imperials can only dream of…”

Rory chose that moment to fall from the beam from which he was hanging. He fell awkwardly, landing in a tangled heap as he smashed onto the hard table. He cried out in pain. All the drinks were upended, glasses smashed, the platters sent flying.

A Look Inside: Airship Pirates 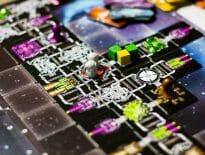 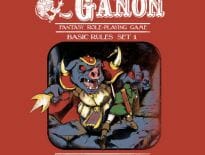