You are here: Home / Games / Tabletop & RPGs / 5 tips for GMs running Legend of the Five Rings – from L5R’s Lead Designer 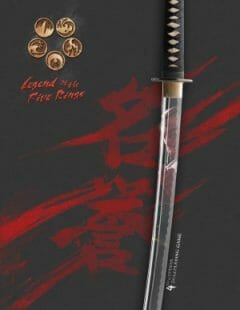 Legend of the Five Rings

Yesterday was International GM’s Day. To celebrate the people who make your roleplaying enjoyment possible DriveThru RPG launched their biggest sale of the year. The good news? It lasts for two weeks. Want big discounts? Check out the sale.

It’s great that the sale is still on – but what about helping GMs? That’s what we want. Step in Rob Hobart of AEG. Rob knows Legend of the Five Rings inside out. His full title is L5R RPG Lead Design/Line Developer/Line Editor.

5 tips and tricks for L5R

1. Remind them of the culture. Samurai know all the details of Rokugani etiquette and social convention… but players don’t. Instead of waiting for them to make a mistake and then punishing them for it, give them frequent reminders (perhaps justified with Etiquette Skill rolls) of what is appropriate (and inappropriate) to do. If the characters violate etiquette, it should be intentionally, not by accident.

2. Show them the bad side of samurai culture. Emphasizing things like the harsh treatment of peasants, the outright dehumanization of the eta, the seemingly unjust nature of Rokugani law, and the impossible demands of Bushido all help the characters to understand the tragic side of samurai life. (For bonus points, show everyone the movie “Hara-Kiri” — in either its original version or the excellent remake by Takashi Miike.)

3. BUT… also show them the noble side of samurai culture. Introduce NPCs who embody the finest aspects of samurai ethics. Show them a magistrate who genuinely cares about justice. Show them a lord who feels genuine responsibility and compassion for his peasants. Show them how even the harshest samurai can have a human side (romance plotlines are especially good for this).

4. If you use the Shadowlands, make it scary. Don’t fall into the trap of depicting a Shadowlands adventure as a simple “kill the monsters” crusade. Approach it like a horror story. Think Call of Cthulhu, not D&D.

5. To quote the great John Wick: “Hit them below the belt.” Most of the great Japanese samurai stories are about suffering and tragedy. Put the characters through the emotional wringer. Make their victories bittersweet, their enemies cruel and ruthless, their losses painful. And when they finally win, make sure they EARNED it.

Tabletop & RPGs The World Hates You: A Review of Trigger Happy