You are here: Home / Games / Tabletop & RPGs / Supergroup fun: A review of the Sentinels of the Multiverse 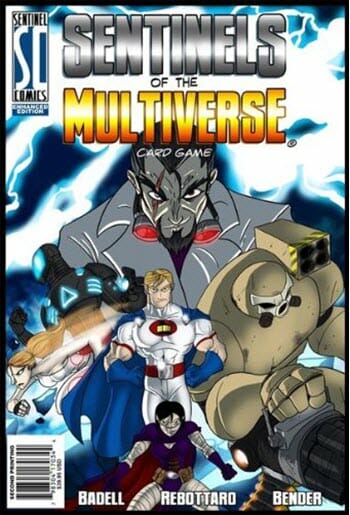 Sentinels of the Multiverse @ Amazon

I really didn’t know what to expect when I opened up the colourful Sentinels of the Multiverse but I was cautious. It looked full on from the outset. The box promised a cooperative superhero card game and, oh boy, does it provide cards. Loads of cards. So many cards that my supply of rubber bands took a critical hit.

As it happens the investment in rubber bands is worth it. Sentinels of the Multiverse is great fun to play. I was cautious as I unwrapped all the cards, eying the rules and references to Kickstarters that I’d neither read nor taken part in and tried to sort out heroes, from villains, from environments and powers.

The game is straight forward in principle. You begin with cards from your hero’s deck. The villains (cards) get to go and typically get minions or powers to annoy the heroes, then the heroes go and then there’s a new environment.

I rather like the environment cards. They give the card game that comic book feel rather than reducing it to just a paper based skirmish game.

In the hero’s turn you have to decide whether to tackle the headline villain straight on, deal with one of the minions the cards have surfaced or attempt both.

You’ll get the structure of play from the Quick Reference sheet on “page zero” of the rule book. There are some wriggles though, in the few games I’ve now been part of we’ve managed to produce combinations of cards that weren’t immediately obvious and weren’t detailed in the rules. On each occasion it took just less than a minute to agree something sensible and get on with the game.

This is a collaborative game. The heroes are trying to beat the villains. You’ll have selected both. I don’t see the villains ruining the harmony of the game. I do see, in less experienced groups, a jerk of a player upsetting the flow of things. That’s always a risk with such games but at least with Sentinels of the Multiverse you hand of cards is private so you can always bluff annoying players who aren’t quite able to cope with the collaboration aspect of the game.

It’s the artwork that totally won me over. I was immediately cautious of Sentinels of the Multiverse because of the art on the box. Then I was worried as I unwrapped and wrestled all the cards. Everything looked so cartoony. However, just a few minutes into game play and equilibrium had been reached. The art suited the gameplay and the card descriptions. Even the style won me over. I stopped seeing them as cartoony and started seeing them as fun. It’s not quite a four-colour retro theme; it’s more like an independent comic book theme.

Given that the gameplay is fairly straight forward, that you can get going with just two players, you can get to channel that independent vibe and the superheroes and villains play so differently consecutive games there’s a lot to be said for keeping Sentinels of the Multiverse within reach when friends visit. Games last for about an hour if you concentrate but I had more fun with longer, lazier games that featured food, drink and joking around.

My copy of Sentinels of the Multiverse was provided for review. Playtest based review.

Supergroup fun: A review of the Sentinels of the Multiverse

Geek Stuff Cosplaying as Brave Merida with an actual bear