You are here: Home / Games / Tabletop & RPGs / Wave Goodbye to the World of Tomorrow: Aeon Wave for Fate Core 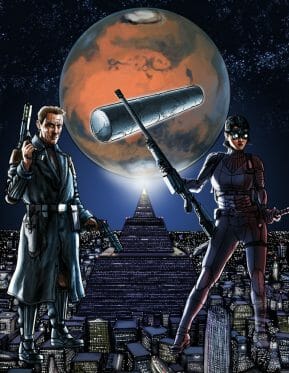 In the near future, the scientific community become aware of a signal emanating from space. The signal contains a massive quantity of indecipherable information, a data stream, broadcast from an object in orbit around Mars. The signal becomes known as the Aeon Wave – and for those able to decrypt even a fraction, the data contains untold potential. Within the datastream, vast knowledge of advanced technologies exist – and the corporations of the world move far faster to crack the code and harness the data than anything other official body. Governments, whole nations, fall by the wayside, as corporations accumulate great power and leverage through this Aeontech.

The characters in this game now live in world dominated and controlled by mega-corporations. A conflict boils between them in cracking more of the encryption on the Aeon Wave. Every advantage counts, every iota of data might lead to the next bleeding edge advance. At the same time, the corporations strip mine the world’s resources and harness all the labour to produce more Aeontech… and best guess is that the world has another 200 years before there’s nothing left. Unless the datastream holds a secret that might yet save humanity…

Form
Aeon Wave is a combined adventure and supplement for Cyberpunk gaming using Fate Core. Written by Michael E. Shea, illustrated by Kurt Komoda, it runs to 60 pages plus cover.

The supplement uses a clear layout and typeface very like Fate Core and Fate Accelerated Edition, with some very effective illustrations and character images, capturing the tone. Anyone with a copy of Fate Core will be familiar with Kurt Komoda already – including a rather fantastic image from the book portraying an aerial combat with skydiving ninja and a cyber-gorilla hero.

On a positive level, I didn’t notice any disconcerting editorial fubars, and found the whole reading experience a pleasure.

Features
Set in New Tianjin, a city on the east coast of China, dominated by the skyscraping monoliths of the megacorps, Aeon Wave embraces the classic Cyberpunk future of guns and hackers for hire. Whether working for themselves or taking cash in hand from one of the megacorps with questionable aspirations, the characters present a high capable, but ultimately disposable, resource.

Originally fund-raised through Kickstarter in the middle of last year in the wake of Evil Hat’s success with Fate Core, Aeon Wave takes Fate to the edge of this grim future setting. The book combines a short adventure, locations, personalities, setting ideas, and source-listing, along with handouts and six pre-generated characters (the latter two in separate files).

Aeon Wave keeps everything punchy, light and easily digestible. The whole three-part adventure fits inside just twelve clear and nicely illustrated pages – the images reproduced in handouts for player access. The core boils the essentials of the adventure down into a straight walkthrough of the plot – discovery the mission, plan the heist, and execute retrieval.

As this setting is a gritty Cyberpunk one, the player characters have a whole range of options to consider in their preparations and approach. The target might be assaulted both physically and virtually, to some extent, and wily characters might leverage assistance from insiders and competition to get ahead. Whether in acquisition of extra equipment, diversions, security overrides, or whatever else, a well-prepared team can smooth the way, though it’s never going to be a bump-free ride.

After the core of the adventure, the rest of the supplement outlines Personalities, Locations, Mega Corps, and Street Gangs – which takes you up to page 40. Each section provides a focussed slice of information, presenting attitudes and motivations for people, organisations and street gangs, and notable finds, fixtures and attention for locations.

The text includes notes on possible ways to expand the adventure itself and also extend your use of the Aeon Wave world, so that this excursion to New Tianjin won’t necessarily be your last. As it happens, going through the adventure led me to Google Tianjin today – and many of the user submitted pictures and Street View scenes really got my creative juices flowing.

In all instances, whether places or people, the text includes a brief bullet list of aspects, so you can either have them prepared on cards in advance or quickly write them out when characters interact with them.

After a GM version of some semi-encrypted player handout material, the next section provides a Player’s Guide to Aeon Wave (though it has equal value for the GM). Here, the author runs through understanding Fate Core from a near future perspective. Given the flexibility and simplicity of Fate Core, this turns out quite straightforward.

In terms of attributes, considerable competence and ability will generally mean greater use of Aeontech implants or enhancements. The game uses the standard Fate Core Skills, and explains how characters can apply them to situations in both the physical and virtual world – rather than layering on extra complexity with virtual-only skills.

Three pages of sample Stunts – and useful Stunt cards amongst the handouts – provide examples for coming up with your own should you choose to use new characters or run an ongoing campaign.

If you really wanted to expand the options, you can always use Fate Core’s inherent flexibility to do it, or adapt some of the ideas from the Fate System Toolkit expansion to provide more gear, stunt, or skill variations.

Finally, the book rounds out with two pages of sources, in TV, movies and books, followed by thanks to playtesters and Kickstarter supporters.

Final Thoughts
I found the neatest thing about Aeon Wave is the potential outside this introduction. The supplement provides a great grounding in the setting with a broadly defined adventure, all presented with a light touch and clear guidance. The scattered Aspects for people and places make it easy to pick up and use with a minimum of preparation – indeed, if you have copies of the characters ready you might actually have time to prep while the players argue over who plays which.

The unanswered questions have me going, because I’d love to know more. It seems to me that the Aeon Wave might be less a bountiful well of potential and more of an invasive and subversive weapon of an alien conqueror. Between fighting over scraps of decrypted data and burning out the planet’s finite resource to create new Aeontech, why would an extraterrestrial raise a finger to invade when humanity can drive itself to extinction.

Overall, a sound approach to emulating Cyberpunk in Fate Core, a fine introductory adventure, and a solid start to the New Tianjin setting for more, if you so choose.

boreders Thanks! I hope you liked it.

Wave Goodbye to the World of Tomorrow: Aeon Wave for Fate Core 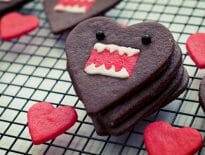 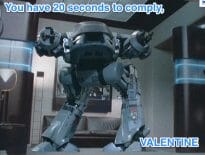