Bad news, folks. It looks like the ~$68,000 funded Kickstarter for Torn Armor is in significant trouble. Worse than that; some of the companies involved suggest the failure might bring them down.

The latest update from Alyssa Faden ends with this summary.

In a nutshell we have been screwed by our supplier and are now not able to fulfill this Kickstarter project. We are discussing all options at the moment, but do consider the miniatures portion of this project dead.

The full update reads well. That’s to say the situation is clearly explained and it sounds like the Torn World Team did what they could but really were mucked around. They used a format that the supplier needed and where then told by the same supplier that the format would not work. 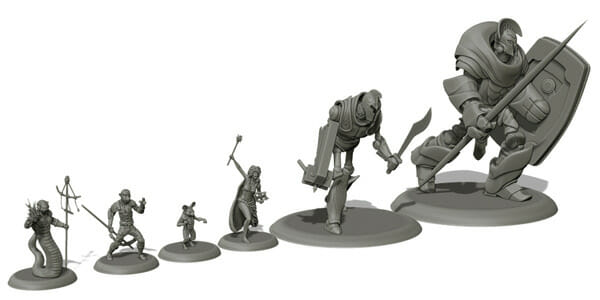 There isn’t a summary from Defiance Games and to start with it sounds like they’re gearing up to defend defeat. They note;

Let us preface all this by saying that Defiance Games has had it’s share of ups and downs and we’ve made a lot of mistakes along the way. It has definitely not been a pretty journey in the least and we are well aware of our reputation.

However, Defiance detail some of the problems and here we get some insight into why designs weren’t suitable.

She brought in a sculptor who began to work on the files. Unfortunately, at the time we didn’t know that the files were such a mess that he was basically just re-sculpting everything from scratch. Reportedly, he was being paid $100-200 each – a really low price for the amount of work he was doing. Unfortunately, as he began to deliver the files to us we saw that changes needed to be made. The technical fixes themselves were fine – but the way they were being laid out presented issues with undercuts and in some cases used way too many parts per figure.

For example – the Mu Slinger – a 20mm tall mouse person – was delivered in five separate parts: head, two arms, body, and tail. Alyssa’s instructions were to have as little gluing for the end customer as possible. We went back with a list of changes and suggestions on how to repose the sculpts to get close to a single piece figure.

All in all it sounds like a horrible drama for all involved. There’s no winner.

In fact, the last paragraph from Defiance is worrying. They say;

We know we don’t have a great track record and we’ve been working to fix it. We know we did not complete the project. But we also want people to understand the other side of this story and why that is. This is a terrible situation for everyone involved and the result may be that both our companies go down because of it.

Console GAME scores exclusive Senran Kagura Burst 3D print…
💰 Copper Coins 💰 Geek Native is an affiliate and may earn commission on purchases you make from third-party sites.
🍪 Privacy & Cookies 🍪 The site uses cookies to survive. By accessing the site, you agree to use your browser to control cookie use or take 1d4-3 privacy damage (tracking). If you defeat cookies via ad blocking, please consider the Patreon. An intro to cookies, and how to control them, can be found here. I Manage Cookies