You are here: Home / Games / Tabletop & RPGs / A Long Line of Body Snatchers: A Review of Hideous Creatures: Ghouls 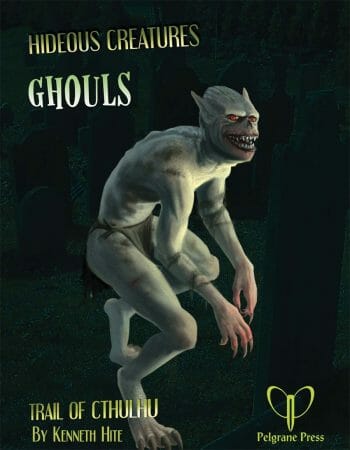 At heart, Ghouls are haunters of the dead, spending their time around the bodies of the deceased, primarily as a source of sustenance, but also seeking out grave goods. In a lot of horror fiction beyond Lovecraft, they have become the pathetic, fawning groupies of greater monsters – failed vampires, would-be liches, and the almost zombies. They hunger for immortality and the touch of the grave, and yet somehow they fail to make the transition.

Lovecraft wrote several stories that either focussed on or included reference to Ghouls. As lesser creatures of the Mythos, they more often appeared as wretched outcasts than servitors. Kenneth Hite considers the loathsome potential of these subterranean corpse-eaters in another installment of his Hideous Creatures series.

Form
Hideous Creatures: Ghouls is a 12-page PDF, written by Kenneth Hite, and released by Pelgrane Press in October 2013.

The PDF uses the same general template and backplate graphics as the core Trail of Cthulhu book, written – for the most part – in a three column format, in a clear, easily read typeface.

Hideous Creatures: Ghouls is part of the Ken Writes about Stuff subscription series – a ploy by Pelgrane to keep Kenneth Hite busy between major projects.

Features
As with earlier supplements in the Hideous Creatures series and the core Trail of Cthulhu book, Hite offers various alternate views on ghouls, their practices, and their abilities. Indeed, as he emphasizes every time, the facts on ghouls presented here are intentionally self-contradictory. Even if you don’t change the ghouls and their abilities at all, that’s no reason to make fact-finding about them easier or more straight-forward. Investigators potentially hold greater fear of the tantalising almost known than the unknown. Believing you have a grasp on the truth only to find you’ve been misled by crackpots, madmen and outright liars can be a horrible revelation when you’re face-to-face with the enemy with exactly the wrong set of tools to deal with them.

We have alternate considerations of the bestial resemblance – as most commonly ghouls resemble dogs, ponder on their purpose in cross-breeding with humanity and snatching human babies, and list possible abilities acquired as part of their ghoulish heritage. The text also includes an extensive Variations section that offers numerous possible views on the religion, source, evolution, purpose, organisation, affiliation, and spread of ghouls. Given Lovecraft had considerable populations of ghouls in his Dreamlands, Hite offers an interesting tangent proposition that they’re the manifested dream-forms of humans who have died from starvation.

The sections on Ghoul Abilities and Variations make for a whole range of options that support a wide variety of ghoul types and power levels. For Keepers, this ensures investigators can’t underestimate these diseased predators as forgettable Mythos mooks. Given the horror backdrop of Cthulhu games, the Keeper must avoid familiarity and comfort at all costs, so curveball adjustments to the likes of Ghouls makes perfect sense. Indeed, rampant inter- and cross-breeding of the creatures means a bewildering range of abilities and threat makes perfect sense.

Mythos Echoes provides a short section on cultural variant monsters of myth with ghoul-like facets. Then two pages of Investigations offers ghoul-specific clues that a character might unearth with Investigative abilities, focussing specifically on the more traditional Lovecraftian Ghoul.

Scenario Seeds provides a couple of adventures ideas for Keepers to consider, while Bibliography rounds out the supplement with copious source materials. Starting with the works of Lovecraft, this final section fills half a page and offers a multitude of tales by a wide variety of authors.

The potential of ghouls as a tool of felonious activities means that many tales of the criminal underworld provide interesting avenues for investigations. Ghouls also have potential as creepy and foul complications for post-catastrophe encounters and incidents.

The supplement references Ghoul as a new pool, but disappointingly doesn’t go into detail nor reference where more details on it might exist (if any). Serving as both an Investigative and General ability, Ghoul supports the gathering of clues from an intimate understanding of ghoul lore and language, while also covering the physical traits of the twisted existence. The reference almost reads like part of an excised section or an undeveloped after thought, which is a bit of a shame. The ability serves as a way to introduce Investigator-Ghoul hybrids into your game, and I would have liked to see a little more thought and information on the concept.

Final Thoughts
In Hideous Creatures: Ghouls, Kenneth Hite serves up a mouldering banquet of ghoulish potential in this supplement. Not quite the orc or the dwarf in terms of stereotypical predictability, the ghoul has nevertheless become all too easy to cast off as unimportant and easily dealt with. The wide variety of variations and rich story potential suggested herein ensures that these rubbery, corpse-chomping monsters of the night will never be overlooked by lackadaisical Investigators again.

A Long Line of Body Snatchers: A Review of Hideous Creatures: Ghouls 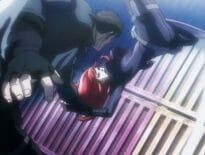 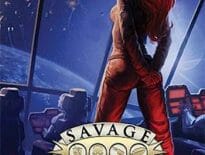