You are here: Home / Geek Stuff / Interviews / Wrestling with demons: An interview with Michael Poisson 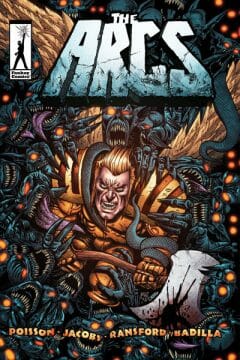 Fanboy Comic’s graphic novel The Arcs is the story of angels versus demons in a battle to protect humanity. Created and written by Michael Poisson the story deals with angels battling against all sorts of troubles. In this interview Geek Native speaks to Michael about inspiration, religion and the future.

We’ve reviewed The Arcs here on Geek Native but for readers who missed that post how would you describe the comic book?

Centuries after God’s abdication from the Earth, the seven Archangels are trapped in a losing war against Lucifer and his demonic forces. Unable to ascend into heaven, unable to even die, the Arcs were tasked by the Almighty to keep humanity safe from Lucifer until His return. But as time ticks on, as more and more angels are clawed to shreds by the demons, as angels begin to lose faith and join the hellions, the Arcs must face the real question: what if God isn’t coming back to save them?

Where did the inspiration for the story come from?

I was raised Catholic and was always very intrigued by the religious stories about angels. The problem was that I never felt like I was getting the full picture. What did they get out of helping humanity? Do they have free will? What are their own dreams? I really wanted them to have their own stories outside of just being slaves to helping human souls. So, I thought the best way to do that was to take away their ruler (God) and see how they acted on their own.

I was also going through a very dark period of my life when I wrote The Arcs. I think a lot of the violence and despair that come out of the story stems from the struggle I was having with faith at the time. 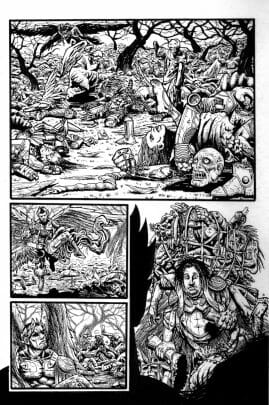 What was working with Matt Jacobs like? How did the process evolve?

I knew that I wanted Matt as the artist from the first character sketch he sent over. His artwork has a really dark beauty to it. He has the kind of work where you could be looking at a drawing of a disemboweled corpse and be completely grossed out but also thinking, “Wow, there’s something really pretty about the way the blood splattered out of his body.”

When Matt came on board, we had a few phone calls and discussed how we were going to work together. I had read comics for most of my life but had never worked in the medium, so I asked how he liked to work with a writer. He was very open to whatever I felt most comfortable doing. So, we went a chapter at a time. I would send over layout pages to him explaining what each panel would look like, and he would send me pencil sketches back. We’d talk them out, and then he would start inking them.

As the process went on (It took a little over a year to complete the artwork.), we really got into a groove and started to understand how each other thought more and more. I caught on to what he got excited about drawing and started to aim the layouts in that direction so he could really let loose on what he was passionate about (demons, battles, general carnage). He always brought really amazing ideas to the table that I hadn’t thought of. We were a good team.

Shout-out to Oceano Ransford who was our third musketeer, the letterer who worked hard to give each of the characters their distinct voice (as well as a kick-ass masthead).

Did you have any concerns about diving head first into a religious topic?

It’s tricky, because if you’re going to have a story about angels, you really can’t be too afraid to jump into the religious aspect of things. Especially since this was a loss-of-faith story, I didn’t censor myself too much when it came to Christian dogma. That being said, I was careful to try to balance the characters out by making them relatable. I wanted them to feel modern and be able to connect with the audience so that the religious stuff wasn’t so hard to swallow. I took some cues from the Preacher comic series and Battlestar Galactica. Both deal with religious and faith aspects head on. I think people respond to the frankness of it, so I didn’t pull punches.

Are you drawing on any personal philosophy or alluding to personal convictions in the story?

I was wrestling with my faith at the time I wrote The Arcs. Being raised Catholic and coming out as gay when I was a teenager did a number on my belief system. It felt like I was taught how to be a good person, live an honest life, get into Heaven, and then you come out and you’re suddenly condemned. You either believe that you are innately evil and a sinner, or you stop believing in what you were taught. So, I kind of gouged my religion out of myself but always felt like there was this black hole in me where it used to be. When I hit this particularly difficult stretch in my life, I got really angry at all of that, and I think that translated into the story. So, I think The Arcs came out of my anger and also my search for what to believe in. The characters go through a similar journey where what they were taught to believe in is taken away, and each one handles it a little differently. 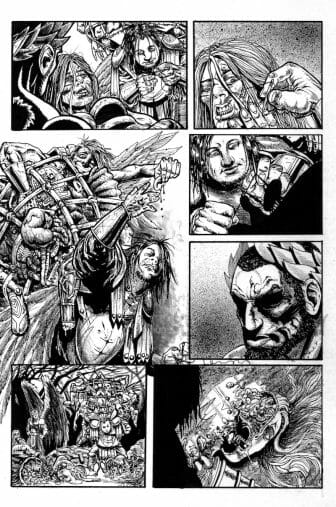 Who was the hardest character to craft?

Azrael. He’s kind of exhausting. He’s pretty pious and a bit of a bleeding heart. He cares for the souls that he looks over but can get preachy. Since Azrael’s the main character, it always felt like a balancing act. He had to be interesting and conflicted. Flawed, but relatable. I rewrote a lot of his scenes with Michael multiple times, because neither of them have too much humor to their characters, so it would come out too heavy a lot of the time. I tried to offset that wherever I could by cutting the tension with wacky Metatron, or having them actually get physically aggressive.

What clues can you give us to what happens next? Which aspects of the story get dialled up and which get dialled down?

I’m working out the second book now! I had mapped out most of the storylines while writing the first, so it’s just about fitting them together. The good thing is that the world and characters were all established in Book 1, so there’s more space for story and character development now.

I will say that Book 2 moves FAST. I originally envisioned The Arcs as a limited series with about five books in it, so I’m not holding anything back. There’s a major power shift in Book 2, and it comes about using the plot lines set up in the first installment. Plenty of Pieced Army and Gauntlet drama! The cracks within our core group of angels start to blow apart. We get some epic battles in Book 2 and lots of blood and gore. And, the Arcs have a new face of evil to fight against!

Which graphic novels would you recommend to readers who enjoyed The Arcs?

Preacher, of course, is amazing, and I think a good parallel to The Arcs. I really love Locke & Key, as well. I’m in the middle of The Walking Dead right now, and that’s a great story that has a similar dark hopelessness to it.

Wrestling with demons: An interview with Michael Poisson

Geek Stuff Parp! Moon monster in spoof ad
wpDiscuz
Loading Comments...
Comment
×
💰 Copper Coins 💰 Geek Native is an affiliate and may earn commission on purchases you make from third-party sites.
🍪 Privacy & Cookies 🍪 The site uses cookies to survive. By accessing the site, you agree to use your browser to control cookie use or take 1d4-3 privacy damage (tracking). If you defeat cookies via ad blocking, please consider the Patreon. An intro to cookies, and how to control them, can be found here. I Manage Cookies