You are here: Home / Books / Comics / National pride: A review of Saltire 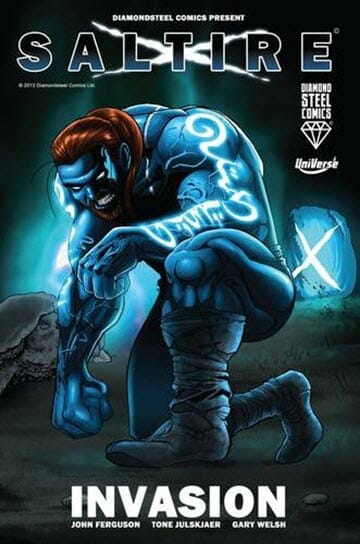 Diamonsteel Comics introduce Saltire as Scotland’s first superhero and given the red headed, beardy chap with big boots and blue skin it seems pretty clear to me which nation he represents.

Like many national pride issues; Saltire looks backwards in history and to about 125 AD when the Roman Empire had control of much of Britain but not the areas which would become northern England and Scotland. There is some good comic book storytelling to be he had here because there are some bits of historical evidence (the Jarrow sandstone fragments) that suggest Hadrian believed he had divine instruction to keep “intact the empire”. Why else build a stone wall nearly a hundred miles long just to stop some raids?

I think the art direction by Tone Julskjaer and Gary Welsh is strong and bold in Salture. It’s not often you get to see a naked blue giant ripping his way through Roman legionaries. At least, I think Saltire is naked, I found that debate disturbingly dominant in some of the artwork as he’s drawn as if he was wearing some exact match blue skin tone pants. Or maybe he’s genderless, since he was created rather than born.

The blue hero visual works well too. Giving him two swords was a sly idea – it lets the current Scottish flag recreate itself not with crossed clouds on a blue sky but with crossed swords against a blue muscle man.

It feels like Ferguson has successfully abridged a far larger comic book and kept the absolutely key scenes. This is true of Book One: Invasion and of Book Two: Inception. There’s less of the summoning in Inception and more of popping into the key meetings after the creation of Saltire. While the clever abridging of a greater story is quite an achievement and ensured I was not left hanging it did leave me with the feeling that I’d been rushed through tour of something I would have liked to have spent more time on.

Normally I worry about the thin line between nationalism and jingoism. I’m a Scot and I opened Saltire with a decree of concern. The good news is that the Saltire not only stays clear or current drama here in Scotland – and I think that’s partly due to the wise decision to anchor the story back in 100 AD – but remains safely fantasy fun. We’re dealing with demonic looking unicorns, dragons, the fae and big blue guy. We’re not dealing with silly suggestions that longitude and latitude have any influence on brain power, courage or your decision making abilities.

Saltire is about national pride but it’s a fantasy story that allows itself some black and white – or perhaps blue, in this case. Once I was a few pages into the comic book and stopped worrying about baggage I started to enjoy it a whole damn more.

I’d recommend Saltire to Scottish comic book fans. That seems niche but it’s clearly the audience Diamondsteel are targeting. It’s also the audience most likely to get a kick out of his fantasy romp.

My copy of the comic book was provided for review. Saltire, Scotland’s first superhero by Diamondsteel Comics.

National pride: A review of Saltire 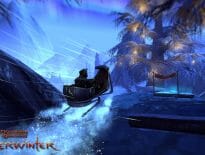 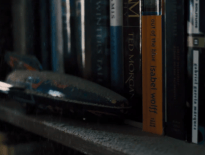