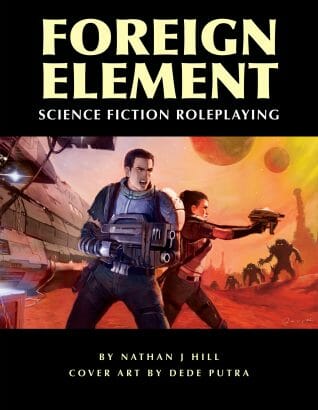 Sometimes, when you see the cover of a book, you not only find yourself unable to judge it, you also find yourself intrigued enough to pick it up simply to fathom what it might be about. When I saw the cover of Foreign Element – with gun-toting futuristic soldiers surrounded by a swarm of indistinct alien warriors – I found my interest piqued, particularly as the game’s title was giving nothing away!

I’m glad I gave in to my curiosity.

The book has a clean, two column format, with call-outs featuring in-game quotes, log entries, and media snippets. The last page features a character sheet, and the book includes both a Table of Contents and a two-page Index.

The corebook includes interior art by Sean Thurlow, and cover by Dede Putra – all of which adds a great deal to setting the tone and atmosphere for the game.

You can access additional material for the game online at the Mystic Ages website – including two additional character archetypes, a character sheet, and a short adventure.

Features
Foreign Elements is a science-fiction game in a fairly free-form setting, which might be post-apocalyptic, dystopian, or hard sci-fi… It really depends on how you choose to play it. The game doesn’t push a particular approach, so it depends on what details of the background you choose to focus on.

When I read through the game, I found myself reminded (from my personal tabletop playlist) of Paranoia XP, Prime Directive, Eclipse Phase and small press Triune, with cinematic leanings toward Aliens, Starship Troopers, and the TV series Lexx. Well, sort of on that last one… I can easily see a GM taking the weirded out universe approach.

Setting
In the near future, humanity has expanded to the stars with warp capable ships, driven primarily by corporate greed. If you take the stereotypical corporate vision – where competitive edge can all too often mean questionable research and decisions that push the boundaries of morality – then open the universe up to support it, you have the future of Foreign Element. Expand, explore, exploit.

In the midst of all this exploration came the Great Blackout. Without warning, almost half of humanity went silent… whole swathes of deep space cut off. Companies invested in deep space colonies, remote factories, speculative prospecting or transportation found themselves facing commercial collapse. Families, friends, colleagues, partners – lost. Humanity discovered just how uncaring the universe could be, the hard way – and without explanation.

In this respect, Foreign Elements has a bit of a mystery going on. While the corebook offers some suggestions on what might have happened, absolutely nothing here tells the GM an absolute truth. That makes this game a relief to review, because nothing I say here will give the game away. This very mystery forms the core motivation of the game – as teams of player characters, members of the Intergalactic Union’s Rescue and Exploration organisation, valiantly head out into the void to reestablish contact with lost colonies, isolated facilities, and desperate survivors.

While the relatively neutral Intergalactic Union serves as the coordinator for the RX teams, the teams and the IU depend on the sponsorship of the major corporations for equipment, armament, and transportation. The motivational ad breaks in the Starship Troopers movie and the service groups of Paranoia XP definitely came to mind here, as well as a touch of the omnipresent Weyland Corporation in Aliens. The player characters depend on this corporate gear and face pressure to serve as contracted lackeys. The IU pay for success, but the corporations always pay better…

In the first part of the book, you get half-a-dozen pages on the Great Blackout, half a dozen on core and lost worlds, several pages on the primary corporations, and more than half a dozen pages on technology. In Foreign Elements, you have robotics, Artificial Intelligence, terraforming, warp drive, prolonged lifespans, and assorted combat technologies. However, RX teams depend most on nanorobotic technologies that mean every sort of injury, all the way up to actual death, can be resolved through DNA reconstruction and restoration.

You can’t live forever, but you can expect at least three strikes before you’re out…

Creating Characters
Character generation can take two routes, depending on how keen you are to get playing. The game offers six constructed archetypes you can use as pre-generated characters to play straight away, or you can tweak them with new skills and motivations for a personal touch. Alternatively, you have the option of a simple point allocation system.

All characters have six Traits – three active, three reactive – that cover abilities that do stuff – Prowess, Smarts and Empathy – and abilities that allow characters to stop stuff happening to them – Toughness, Focus and Reflexes. Each has a value from 1 to 4, and you roll a six-sided dice for each point, with an evens result meaning success.

Characters also have Marks – narrow traits that cover skills, training and special abilities. You can choose things your character does well, has expertise in, or whatever. If you have a Mark, you add one more die to your roll when you check for success. A character also has a specialisation with a Double Mark, which means you roll two extra dice.

Aside from choosing a motivation – why risk your life working on an RX team – and a name, that’s character creation done. Simple and quick – ideal for getting started in a hurry. With an archetype, you can get playing even faster.

Core Mechanic
A little over halfway through the book, the game hits the core mechanic used to determine success. Essentially, the GM rates a situation’s Scene Difficulty (SD) – from 1 to 50 – and the player characters must whittle that number down to zero. The GM has very little rolling to do – and despite the dice rolling, the players get plenty of opportunity to tell their character’s story. How the characters get the Scene Difficulty down to zero depends entirely down on their ingenuity and their skills.

If you’re in a situation where you might get hurt, like this fight, then the GM generates a specific Scene Difficulty. If the thugs had a Prowess of 2, the GM rolls two dice and any successes create the SD for you to avoid injury.

If you do something that places you in direct opposition to someone else, both sides roll and the opponent’s successes cancel out the character’s successes. So, if you use Empathy to convince a colony administrator to shut down the power core, but his weaselly coordinator doesn’t agree – his own Empathy roll cancels out your efforts to zero the SD of the situation.

The mechanic cuts a lot of the pressure on the GM and gets the players to think more creatively about how they can handle a challenge.

The players can also cut the SD down faster with a once per scene Crunch, which means they come up with a way to really inconvenience the enemy or even the odds, doubling their successes for a turn. Alternatively, the whole team has access to an equipment pool that they can draw on for extra dice, but the pool is finite and the sponsors will demand their moment in the spotlight.

The GM can add a touch of urgency with a Deadline, which counts down on a six-sided die – and likely leads to an unfortunate outcome or forfeit if the team can’t zero the SD before time runs out. In the meantime, characters that play to their Motivations can grab two extra dice, even though that focus might not necessarily benefit everyone equally – so, someone with the Motivation to find their lost daughter might claim extra dice when hacking into a colony database, because the information locked in their might point to her whereabouts.

A character’s Toughness determines how much damage they can take, but, as I mentioned, death isn’t an insurmountable obstacle. Even if you use up your free restoration allotment, 500 credits can buy you another one. Indeed, successful missions and hitting objectives all earn credits and those credits can go toward more gear, accelerated skill training, and nanorobotic-buffing. Instead of experience, you spend credits to advance your character – and hope that your luck and cash-flow doesn’t run out!

Danger, Intrigue and Fun
“Stories in Space” gives the GM advice on getting a story and session together, and putting the RX team through their paces. With a key focus on fun, the chapter offers some advice on useful source material – in books, movies and computer games – and setting up missions that provide both general and individual incentives.

Missions in Foreign Element should challenge the team, but also tax the individuals. As well as individual motivations, characters may have objectives driven by contacts, sponsorship or obligations, and ideally these should go head-to-head, creating personal and team conflict. Most of the time the members of an RX team won’t even realise they’re their own worst enemies!

The section rounds out with further thought on what might have caused the Great Blackout, but really leaves it to the GM – and I like that. The fact Nathan isn’t spoon-feeding the reader with definitive cause allows each GM to play to their own strengths, the player’s suspicions, and the individual stories of the RX team characters. A fiendish GM will find a way to hint at more than one possibility and keep the players guessing – schemes within schemes, littered with hints, loose ends and red herrings.

The rules round out with a starter adventure that sees the RX team sent out to the Red Planet, an unimaginatively named world rich in mineral wealth valued for use in electronic construction. Cytek, the key pre-Blackout investor in the planet, wants the RX team to go in and investigate a specific outpost, Center 26, from which they have received garbled transmissions. The adventure includes primary and second objectives, as well as a suggested list of individual character objectives appropriate for general allocation or specific archetypes, like mercenaries or scientists.

Final Thoughts
Nathan Hill seems to have agonised over writing this game – or at least my cursory reading of his forum chats and blogging suggests. At one time, this science fiction game included lists of skills and equipment, but I’m glad he cast them off and went for the simpler option. The Scene Difficulty system boils situations down to absolute essentials and sets the agency in the player character’s side of the court – how can they turn this situation around using the skills, abilities and gear they have to hand. The GM can set more than one SD for a situation – like one for the attacking horde of aliens, and another for the encrypted door security mechanism – and leave the players to decide how they will survive.

The conflict of motivations, sponsoring corporations, and secret objectives mean that a mission can easily end in failure, and yet some characters will still come away smiling – the balance in their secret bank accounts looking substantially healthier. Gaming groups playing Foreign Element could easily run the gamut from gritty sci-fi drama to dystopian black comedy, and I like that freedom – along with the fact that the game doesn’t commit to a specific cause of the Great Blackout.

An easy read, with solid background, quick play archetypes and simple, flexible mechanics, Foreign Element makes for an interesting addition to any gaming library – both as a one-shot session-filler or the basis of a long-term campaign.

The new URL at OBS is http://www.drivethrurpg.com/product/142384/Foreign-Element-RPG?affiliate_id=38475

Apparently it is produced/sold by Precis Intermedia (see https://www.drivethrurpg.com/product/142384/Foreign-Element-RPG ) – not sure if it was a mistake or if ownership changed later. I suggest you update the review and change the tags, anyway.

Thank you. This is a very old review but I’ve updated the Foreign Element DTRPG links.

Great, thanks. Now if the review could just be tagged with “Precis Intermedia” … 🙂