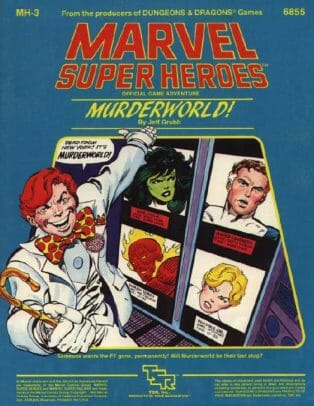 The first published adventure I ran my Marvel group through was Murderworld, one of the many adventures written for the Marvel Super Heroes role playing game. This adventure was written specifically for the Fantastic Four so right off the bat one of the limitations for Murderworld is that it is best suited for a party of that size. If you are using original characters or other Marvel heroes then you will need to make some modifications before running the adventure. I’ll touch on this later and will try not to give much away.

First, it is important to understand exactly what Murderworld is. In the Marvel Universe it is not one specific place, but rather a series of places constructed by the villain Arcade. He has no super powers, but is a talented mechanic and engineer. Little is known about Arcade’s background but it is known he was born to wealth and killed his parents to get their money. He then turned to assassination for fun, with his M.O. being trap filled amusement parks known as Murderworlds. For one million dollars he will abduct the victim of the client’s choice and place them in one of his death traps. However, there is a catch. The victim must have a chance to survive, even if it is slim. He now runs Murderworld with his assistants Miss Locke and Mr. Chambers.

Since this adventure is written for the Fantastic Four it opens with a typical day at the Baxter Building. Reed Richards is monitoring the portal to the Negative Zone, Sue Richards and Johnny Storm are being interviewed by a student working on a sociology project, and She-Hulk is working out in the gym (this adventure takes place at a time when Ben Grimm left the team, though the adventure comes with the Thing’s stats in case a player would rather use him). All seems normal until Dr. Doom attacks! Actually, it is just a Doombot, so the players don’t have much to worry about. After the battle the players find a clue that leads them, to the next encounter: a card that says DeCara Electronics. The card conveniently includes the address…

The players will probably determine that this is a trap and will likely investigate with caution. This leads them to a battle with several robots disguised as water towers and likely a defeat. If the players win or decide not to grab the adventure hook the adventure includes other ways to lure the party to their destiny. Arcade will even stoop to kidnapping Alicia Masters if necessary!

Once the players arrive or are brought to Murderworld each will be placed in a death trap. Since the adventure only includes four traps you will want to decide ahead of time which trap you are going to put each player in if you are using different heroes. Otherwise, if you are using the Fantastic Four each trap has been designed for a specific character.

Whether the trap will be an appropriate challenge depends on the powers of your players. For example, there is a trap called “Mr. Fireman,” which is naturally for the Human Torch. If you don’t have a hero with fire based powers then it won’t be as much of a challenge.

If the heroes survive then it is home to the Baxter Building (or the party’s HQ if the players are not using the Fantastic Four). The adventure is not yet completed, as the party will find that their base of operations has been invaded by two hostile forces. On one side you have two B-list villains: the Wizard and the Trapster. The other…well, I don’t want to give that away. Each side is after something in the Baxter Building. Wizard is after the technology used to create a portal to the Negative Zone while the other enemy is after a time machine. If that wasn’t enough, there is an additional fight with Blastaar. When the smoke finally clears there are several loose ends that can be introduced, like having Reed Richards deal with the irate tenants of the Baxter Building who are not too happy with recent events in their building!

Overall, Murderworld is an entertaining adventure. Its main flaw is that it was written specifically for the Fantastic Four, so playing the game with a larger party or other heroes will require a lot of modification. The four Murderworld traps are good, though as I said before they might not prove challenging enough depending on the nature of the powers of the party. Still, the encounter with the robot water towers and the excursion into Murderworld itself can make for a good game session.

Anime Ghost in the Shell: Arise “Ghost Pain”…
💰 Copper Coins 💰 Geek Native is an affiliate and may earn commission on purchases you make from third-party sites.
🍪 Privacy & Cookies 🍪 The site uses cookies to survive. By accessing the site, you agree to use your browser to control cookie use or take 1d4-3 privacy damage (tracking). If you defeat cookies via ad blocking, please consider the Patreon. An intro to cookies, and how to control them, can be found here. I Manage Cookies