You are here: Home / Games / Tabletop & RPGs / Icy Winds and Mighty Thews: A Review of Citadel Beyond the North Wind 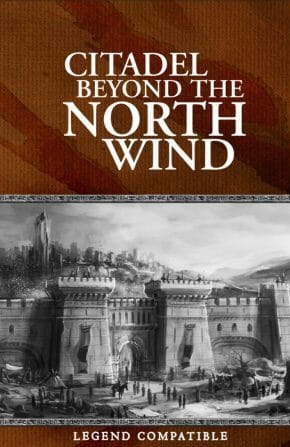 Heroic fantasy encapsulates that slice of fantasy that embraces excitement, sword play and a measure of high camp, in my opinion. The genre never seeks to mirror reality, venturing instead into impossible and impractical matters of magic and the supernatural. Here swords glisten with the gore of a hundred minions, and villains, often otherworldly in form or origin, concoct unreasonably convoluted plans involving virgin sacrifice and fragile magical artefacts.

Citadel Beyond the North Wind is all about that sort of sword and sorcery. Tainted and evil men mutter and make plans in dark places, seeking to fulfil their ultimate and degenerate destinies at the expense of everyone else. While in some games the heroes seek to riddle their way through the labyrinthine machinations of the bad guys, here – in the World of Xoth – it makes a lot more sense just to stick your sword through something soft and vital, right up to the hilt, and hope for the best.

Form
Citadel Beyond the North Wind is a 55-page PDF (including front cover), released by Mongoose Publishing. The supplement includes many maps and black-and-white art, with an emphasis on the former. The supplement really focuses on the detail of the setting and making the key locations clear and accessible for the pitched, bloody battles likely to follow!

Citadel is one of a series of supplements set in the World of Xoth, an original sword and sorcery setting. Originally created for Pathfinder, Mongoose has made this line compatible with their own Legend game system.

Features
The supplement breaks down into plot, places and people – with sections divided by short doses of statistics for the Legend system. Citadel Beyond the North Wind focuses on providing a broad brush environment as a back drop to your fantasy gaming, with a nod to the open world concept. However, sword and sorcery hankers after something a little more linear than real sand box gaming allows – you don’t want to go for too long without sating the thirst of your well-honed blade, right?

The introduction outlines the core conceit of the supplement, relating the storyline and misconceptions that surround the tyrant Arkanth Mal. Not a pleasant man by any measure, Arkanth Mal, the witch-king of Galuga, grand master of necromancy and alchemy, has a love interest. He pines for Eliyh, his true love, but she did not stay with him and found love in the arms of another – only to suffer a terrible fate. Now he seeks a means to return his love once more to his side, and experiments endlessly with sorceries, foul and twisted, to this end.

The focus of the rest of the supplement drifts from the lands of Yg and the key settlements, through the wilderlands and wastes that surround it, on to the palace of Arkanth Mal and the wretched ziggurat of his love rival, Boras. The land provides a home to slavers and wildmen, ghouls and zombies, giants and lethal shrubbery. The faint-hearted should not consider Yg a preferred holiday destination, for nothing in this land has your best intentions at heart.

In line with the tropes of sword and sorcery, the places, palaces, and pestiferous prison-complexes of the setting revel in their linear simplicity and preponderance of hapless ‘red-shirt’ minions/guards, keen to throw themselves upon the thews and thaumaturgies of mighty heroes. In the wilds south of the Endless White Lands, you survive by your grasp of the pulp fantasy genre and the keen blade you call your only true companion.

The author has given half of the supplement over to stats for the many inhabitants and personalities of the setting, allowing you to build challenging encounters, with guidance on preferred tactics, weapons of choice, and expertise at hand. Whether slavers, hunters, woodsmen, or sorcerers, Citadel Beyond the North Wind either puts the details at your fingertips or provides clear reference to the core books of Legend and how to customise base creatures – specifically citing page numbers in Monsters of Legend, where appropriate.

There are a few inconsistencies in text and maps that warrant consideration – though I expect the PDF will embrace errata in a future update. For example, the map of the Palace of Arkanth Mal, does not include the described rooms, 12, 14 and 16 as marked areas, and the three guard rooms present vary considerably in size, position and viewpoint, but have the same description and reference to arrow slits.

The sheer breadth of the setting of the lands in the North warrants much more detail – and I hope that Mongoose will return to Xoth time and again for that very purpose. Many times, a brief word triggered a curiosity in me, but did not see development, leaving me wanting. The strange priest who seeks enlightenment by hanging himself from the Sacred Yg-Tree deserved more attention!

Final Thoughts
Citadel Beyond the North Wind is not a perfect gem of unquestionable clarity, nor will you necessarily run a game straight from these pages without some thought. Sword and Sorcery makes demands of Gamemaster and player alike, and won’t appeal to everyone. It requires a certain mood and approach, the energy to wade through great battles and put down enemies with hammy retorts.

Citadel Beyond the North Wind offers a handful of seeds, and a Gamemaster should take the time to nurture them to get the most from Xoth. With much information available on the world – at http://xoth.net/blog, many adventures released in other supplements – like The Spider God’s Bridge, and the wealth of sword and sorcery fiction available for free – much Robert E. Howard can be found free to access online from the likes of Project Gutenburg – you have all the tools you need to bring the high camp of well oiled barbarians and fiendish demonic plot-meisters to your gaming table.

Icy Winds and Mighty Thews: A Review of Citadel Beyond the North Wind

Tabletop & RPGs I Want to Believe: A Review of Moon Dust Men