Geek Native’s Irregular Reconnaissance column takes a look at geeky things that have been distracting us. Consider the post a series of micro reviews for episodic titles.

This batch of anime was exclusively watched via CrunchRolly streaming via the Xbox 360 app.

It’s easy to see why Attack of Titan is popular; it’s thrilling. Set in a world that could have been ours, humanity now hides behind giant walls and hope that the Titans don’t break in. Titans are tall humanoids who don’t seem to age and don’t need to eat – yet the hunt and eat humans as a compulsion. Attack on Titan serves up the gore but perhaps not quite at the guro level.

The main character, to begin with, is Eren Yeager who looses his mother to a Titan attack when the walls are breached and mankind is forced backwards. Yeagar becomes determined to join the fighting force and slay as many Titans as possible.

Status: Highly recommended; can’t wait for the next.

Gargantia on the Verdurous Planet

A military conditioned mecha pilot gets flung to a distant planet – which may be the Earth of his ancestors’ time. This Earth is all water. People live in colonies of boats and so Ensign Ledo and his mech a Machine Caliber (called Chamber) have to pitch. Trouble comes in a few forms; from pirates, to breakaway groups but that is nothing compared to the dark secret Ledo discovers on Earth about the great space war he has been bred to fight in.

Sadly, episode 13 seems to be the last of it. The good news is that the shows ends with a resolution and conclusion.

Status: Highly recommended; will be missed.

Godou is sent to Sardinia to return a stone tablet. In trying to do so Godou slays the Persian god of Victory, Verethragna, acquires all 10 of his forms and becomes a Campione.

There’s a harem aspect plus some romance to Campione! that won’t suit everyone, might attract a few and is tolerated by myself. I’m watching the series as a low priority (after catching up with Naruto, Bleach and keeping up with Attack on Titan) because of the impressive god-form battles. Here we have a Pokemon style situaton except on a divine scale when the battling Campiones (who often rival one another) or angry gods have to find the right combination of powers to win.

My introduction to Omamori Himari came via a friend who said, “It’s an ecchi harem fanservice of an anime but you’ll like it”. He wasn’t wrong.

Yuto Amakawa is from a line of demon-slayers but he doesn’t know it. The action picks off when the token shield he was given as a young boy runs down and the demons start turning up. Thankfully, Omamori Himari is a cat demon who has sworn to protect him. Yuto is allergic to cats.

The ecchi harem features of the anime are predicatble. Himari fancies Yuko, she’s not shy about it; she’s a cat. Many of the demons who turn up are sexy women who, once beaten, fancy Yuko. Lots of underwear gets flashed from the tight costumes as swords clash, fireballs fly and demons cackle.

I watched the series to the end, not just because it was short but because there is a real mystery here and it is paced wonderfully. Why doesn’t Yuko know about his demon-slaying family. Why does Himari want to protect him? Factor in other demon-slayers turning up, human agencies getting involved and demonic plans taking shape and you’ve an anime that carries you along in its momentum.

Status: Great for distracting the brain, have a watch if you’re in the mood.

With a name like Bodacious Space Pirates and the main plot device which casts a college girl as the pirate captain I expected this sci-fi to flirt with the ecchi. It doens’t. It really doesn’t and, in fact, feels more like a female empowerment commentary blended into epic space battles and hacking. I loved it.

It’s far in the future, mankind has gone on to colonate planets across space and that is now all distant past. Piracy in this far flung region of space becomes legal when a planet, looking to break away and become independant from which ever Empire it was a part of, wanted to encourage private space fleets to attack their rivals. It’s after the war, generatations have come and gone, and space piracy is a part merchant, part entertainment and part odd-job vocation.

The anime follows Marika Kato when she becomes the captain of the space pirate ship the Bentenmaru. She does amazingly well but the plot escalates equally well, keeping me entertained and Marika busy.

A dark fantasy. 11eyes is adapted from a graphic novel which was also made into computer game. 11eyes is bleak. It just feels bleak; mind you, it does seem to start with a suicide scene so that sets the tone.

The anime follows Satsuki Kakeru and friends as they try and survive the Red Night. Without warning the day vanishes and Kakeru, Yuka and other friends find themselves alone in an empty city – alone except for monsters and the Black Knights. The Black Knights are no friends, though, they’re powerful creatures-meet-warriors who seem determined to kill the humans.

I loved the mystery in 11eyes. I watched it when I was in the mood for some gritty adventure. If I had tried to watch 11eyes on some other weekend, a weekend in which I wanted cheering up, I imagine I would have turned it off and never come back.

Status: Recommended only if you want some urban fantasy on the dark side. 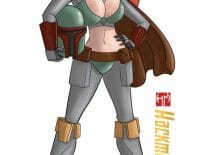 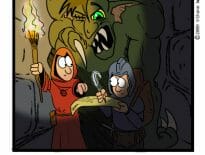