You are here: Home / Books / Vampires and bandwagons: An interview with Freda Warrington 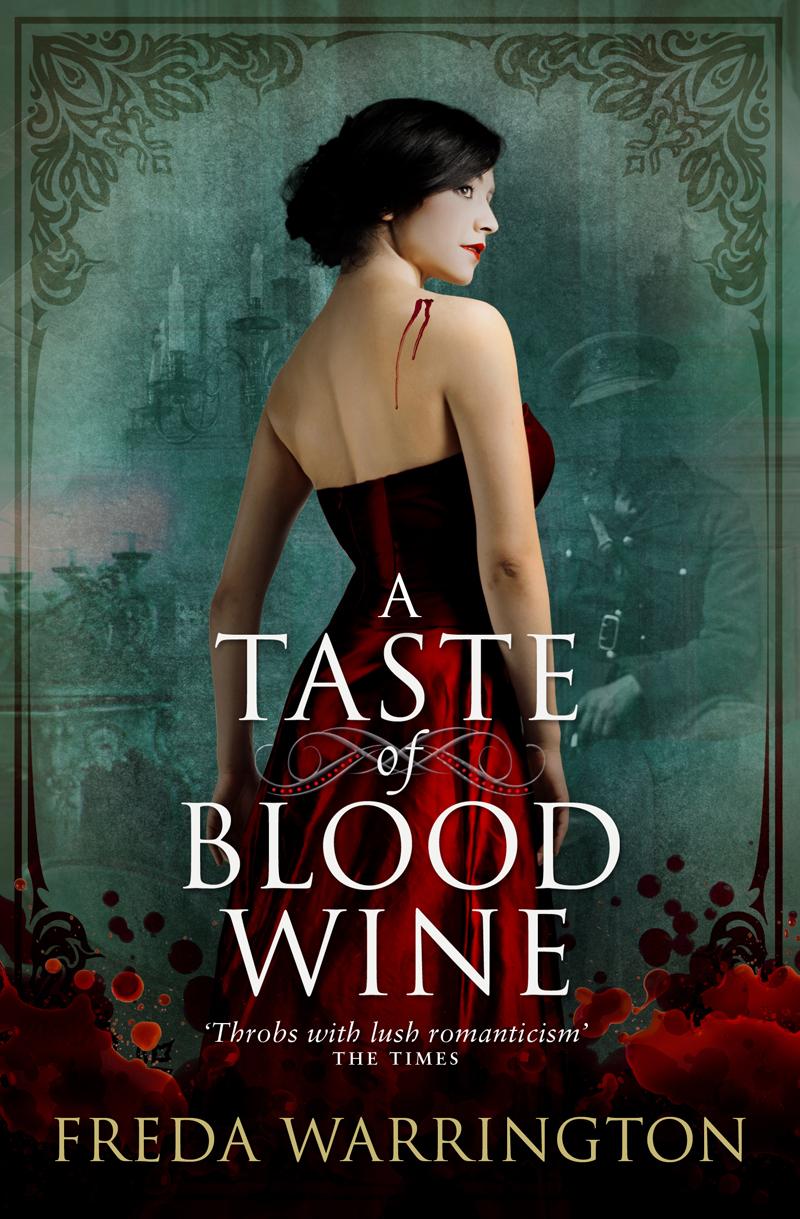 Freda Warrington is the author of the highly acclaimed A Taste of Blood Wine. In this interview, I ask Freda about the story, about vampires but also about gender roles in fiction and in reality. Are female authors treated differently?

You can try this test yourself; what comes to mind when you speculate on a vampire story, that features romance and written by a woman might be like? In hindsight do you suspect some preconceived views about the author, the fiction or even the importance of the book? Let us know in the comments below.

There are some incredibly zealous reviews for A Taste Of Blood Wine. A few readers have claimed “best novel ever” or “best vampire story ever”. Is that level of success 100% good for you as the author or does it start to create pressure, expectations and shadows?

Well, I set out to write the “best vampire novel ever” – at least for ME – and I’m very thrilled that, for some readers at least, I succeeded! All reviews should be taken with a pinch of salt because if you get a bad or indifferent one, it can dent your confidence, if you let it. It’s frustrating when a reviewer takes a book into which you’ve poured months or years of passion, and metaphorically tosses it over their shoulder: when they don’t even get your work. (That said, if a reviewer makes valid points, I give them consideration).

However, most of my reviews have been great, and you do get a glow of satisfaction to know the reader took from the book all the enjoyment that you tried to put in! As for pressure – a bit, I suppose, but again I try not to let it influence me. I imagine that if you’re a really Big Name, it might affect you a lot more… or perhaps when you reach that level of success, you just don’t care! No, good reviews are wonderful, but the thing is this. You can sometimes sit there trying to write and thinking, “Will readers love this? Will they hate it?” – and you just can’t write like that. You can’t second-guess your critics and readers, or please everyone. You have to concentrate on your own instinct and write what feels authentic.

A Taste of Blood Wine first came out in the 1990s but how would you pitch it to an audience today? In no more than four sentences how would you describe the novel?

If you like your vampires grown-up, passionate and not afraid to be vampires… If you love the 1920s, a period of change, glamour and decadence… And if you want a dark love story that “Throbs with lush romanticism” (The Times)… A Taste of Blood Wine will reach the places that other vampire novels can’t!

Vampires are in fashion. Have the vampire crazes been good for you? Or has each vampire-clone that’s rolled off the printing press in recent years taken the shine off your day?

I’ve been told that vampires are “over” at regular intervals for the past twenty-odd years, yet they still keep rising from the grave! When I talked about A Taste of Blood Wine to my agent in the late 1980s, he said vampires were over. When the book was first published in 1992, an American agent said I was “jumping on the bandwagon too late”, even though I wasn’t jumping on any bandwagon, just writing what was in my heart! That was a little annoying.

Of course it was frustrating to see Twilight and a rush of similar novels doing so well while my own perfectly decent books were languishing – but on the other hand, I’d hate my own novels to be seen as riding on others’ coat-tails when they’d actually been written years before… but, you know, that’s publishing. It’s never fair! Now vampires are supposed to be “over” again, yet there’s a new Dracula drama coming out that’s supposed to bring the glamour back! We shall see. I do fear that damage has been done to the genre by over-exposure, and some people say they’re sick to death of vampires – but I hope they might come to A Taste of Blood Wine and its sequels with an open mind and realise that they are rather different… no high schools and no teenagers, for a start!

Why do you think vampires are so stalwartly popular?

The original vampire legends were horrific – basically they were about your dead relatives clawing their way out of the grave and coming back to feed on you! Truly horrible. However, when the fictional vampire began to morph into an aristocratic figure with mesmeric powers – thanks to John Polidori, JS LeFanu, Bram Stoker and others – he or she became a lot more interesting. I think that vampires represent many contradictions – our fear of death or of the dead coming back from the grave, our desire to be immortal and beautiful and have power over others, and of course there’s the erotic subtext too. That’s why they remain so appealing.

In A Taste of Blood Wine, most of the vampires are incredibly attractive, but Karl eventually admits to Charlotte that this is actually the bait in the trap – they use sexual allure to captivate their victims. That’s not to say they don’t have genuine emotions too. This raises all sorts of questions… Does Charlotte really love him, or is she being deceived by his vampire glamour? Is Karl’s desire for her real, or just a sublimated need for her blood? Can they break through the veil of illusions, the roles of predator and victim, to something deep and genuine – or will this just make everything even more difficult and dangerous? I’ve found that vampires provide incredible psychological depths to explore.

Do you think the gender roles in supernatural fiction have changed at all since the 90s? Is that a good thing?

I haven’t read that much of it, to be honest, but there seems to have been an explosion of kick-ass heroines – which I believe started before Buffy the Vampire Slayer – and that’s all good fun. I have mixed feelings because, while we don’t want to see a return to female characters in passive, secondary roles, I think the all-powerful villain-slaying heroine is a wish-fulfilment fantasy of a different kind. Personally I like to see male and female characters taking equal roles in fiction, and being strong (or weak, or flawed, or complicated) in a realistic way. I think that the real-life strength of women is still overlooked. So I do try to write about “real women”, even in fantasy.

“Supernatural” and “Supernatural Romance” are typically presented as different and separate genres. Do you agree with that? Does a touch of romance change a supernatural story that significantly and would you label A Taste Of Blood Wine as one or the other?

The US market in particular seems to be highly genre sensitive – I have been stunned by the labels you see on shelves in bookstores. For example, I once saw “Bachelors with Babies” in the romance section and stared at it for several minutes, thinking, “What? There’s an actual whole separate category for that?” Fiction being split into such specific genres does bug me a bit, but I suppose it’s inevitable as it’s part of marketing, and directing readers towards the sort of books they like. Some readers want pure horror or action, and are severely allergic to any hint of *lurve* in their reading matter. For others, it’s all about the love and the sex.

I do like a good love story, but I aim for a balance between romance and plot – pure Mills & Boon is not for me! What I mean is that a truly involving romance grows from what the protagonists have been through together, and not when two cookie-cutter characters get together because it’s a love story. If A Taste of Blood Wine has to have a label stuck on it, I prefer to think of it as a Gothic Romance – it’s not a fluffy cosy story, it’s dark. People get hurt! Yes, there’s a classic love story at the heart, but so much more going on too.

Is there any discrepancy between the attention female and female authors get from the media? Do “professional media” treat authors in the same way as bloggers do?

“Female authors receive only half the attention given to male authors…”

Well, the good news is that nearly half of all books are written by women. The bad news is that – in the science fiction world at least – female authors receive only half the attention given to male authors. And sometimes, in certain publications, as few as one book in ten reviewed is written by a woman. This has been researched, and I’ve been on a couple of panel discussions about it and seen the statistics! The reason for the discrepancy is unclear but may be due to some of the magazines having mostly male reviewers, and/ or being sent more books by men for review. I think there may be slightly less bias in the fantasy field, but there is still an ingrained prejudice that women don’t, or can’t, write science fiction. Which is blatantly untrue!

I suspect there may be a similar bias in literary fiction, but I haven’t looked into this, nor into differences between bloggers and the professional media. (Are bloggers more open-minded?) I think the media have become less contemptuous of genre fiction in recent years, which is a good thing. However, the long-standing misconception that anything men do is automatically “better” or “more important” than anything women do, merely because they are male, is regrettably still with us. This bias is completely irrational, yet very persistent, a situation that gets me very mad! But we will never give up our struggle to overcome it.

Are you familiar with the roleplaying games hobby? Which of your novels do you think would translate best into a roleplaying game, a world which players could explore and characters for them to encounter or is the whole idea of taking one of your stories and presenting it as a roleplaying game a bad one?

I haven’t indulged, although I have several friends who love roleplaying. It might be possible to make a roleplaying game of A Taste of Blood Wine, or my Aetherial Tales series for Tor (Elfland, Midsummer Night, Grail of the Summer Stars)… the latter has quite a complex Otherworld that the characters can enter. I’d have to work with a game creator, because I wouldn’t have a clue where to start! I have mixed feelings, because in the novels, my characters live through their stories like “real people” and it would seem odd to have them in a game world. However, I wouldn’t rule out the idea, it might be fun!

What can fans hope to see from you in the future? Any secret projects?

Heh heh, if they’re secret I can’t tell you about them! As for the non-secret ones – I’m editing the third vampire novel, The Dark Blood of Poppies, by which I mean going through the text to smooth out any waffle or purple prose – and I’m working on a brand-new fourth one, The Dark Arts of Blood. It’s set in the late 1920s, with my existing characters and a few new ones to stir things up. After that… I’m not sure yet. There are lots of possibilities but I’ll worry about it once Dark Arts is finished. It’s lovely to be playing in my Blood Wine world again.

Vampires and bandwagons: An interview with Freda Warrington 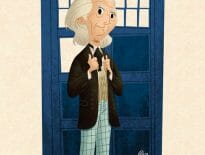 Art All 11 Doctors, the TARDIS and a few generations o… 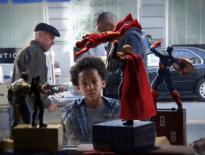