Edwin Perez is an actor, dancer and choreographer from Vancouver, Canada. He is an associate producer for Standard Action, plays Fernando the Half-Halfling Bard, and was a costume designer for Season 1. He can be spotted in a variety of TV shows filmed in the Vancouver area, like Fringe, Psych and Hellcats, and teaches Salsa classes on the side. He DMs his own Pathfinder and D&D games, and loves to make elaborate costumes for Halloween.

Fans can get involved with the next season of Standard Action. How? Pop over to the Kickstarter and you can earn votes. There are a still a few days on the clock to join the action. The project is successful and will fund having more than doubled the goal. 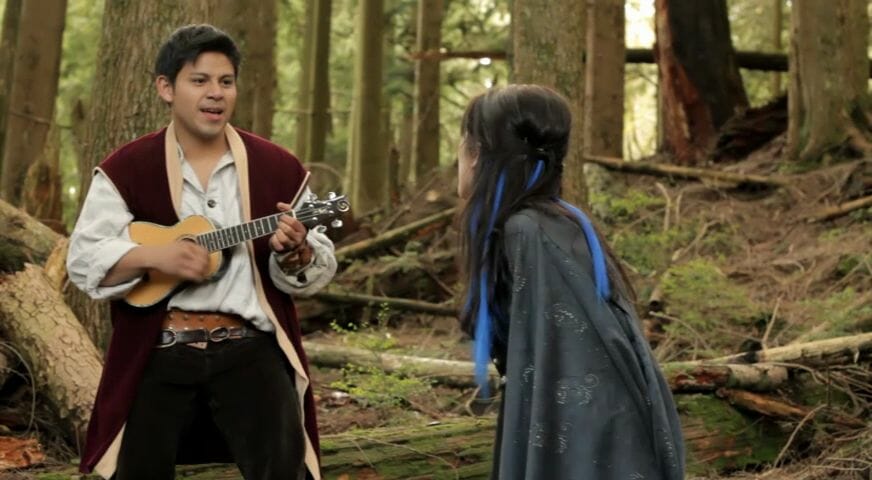 I am Fernando Inigo Vespa of the Hairy Feet, musician, performer, protector of the weak and downtrodden, and today I am here to give you my 5 reasons why Bards rule and others drool!

1. Ladies love men in tights. Any bard worth his codpiece knows to never go adventuring without a stylish pair. I’ve had many a maiden inquire as to where I purchased my tights, and this bard can only assume it’s so they can buy a similar pair as a gift for their man.

2. Bards are the life of the party. Whether it’s a soothing melody to calm the masses or an inspiring monologue followed by a ukulele solo to bring down the house, bards bring the entertainment wherever they go. Who doesn’t love a rock star!

3. Social skills. Being able to split a troll in half with your axe is fine and dandy when crawling through a dungeon, but such antics won’t get you very far at the king’s ball. When court intrigue is abound, a well executed turn, pivot, ball-change, jete, then promenade can gain you powerful allies in high places.

4. The pen is mightier than the sword. So you defeated the hobgoblin armies of Pig’s Head Mountain, stopped the evil cleric who betrayed you, and saved the world from impending doom, DOOM! Well, la di da – if there’s no one to tell your tale, forget about getting that statue in your honor. That’s right, bards tell the tales that must be told, and write the epic ballads that turn heroes into legends, and legends into myths! Let’s see the axe-wielding barbarian do that!

5. Dressed to impress. No one on the battle field is better equipped for that picture-perfect victory pose than the bard; after all, you never know who might be capturing that epic moment in bas-relief. Remember, style is the bard’s OTHER secret weapon, and if you’re going to be the last thing your enemies see before they are vanquished to eternal damnation, given them something to remember. “Curse you halfling, and that gorgeous pashmina scarf!” Oh, if I had a copper for every time I’ve heard that…

For more information about Standard Action check out their Kickstarter pitch or the other top 5 series here on Geek Native.