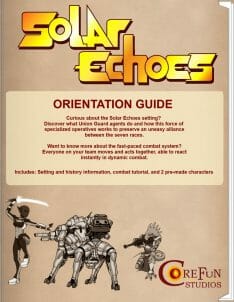 Corefun have made their Orientation Guide to their fast paced, tactics based, sci-fi RPG Solar Echoes free to download.

The PDF includes a combat tutorial in which two characters face off against a security drone, testing different moves and attacks over three rounds of combat. The guide includes maps for each round that illustrate character movement and positions.

Geek Native got in touch with Andy Mitchell of Corefun to ask two questions about the guide; why make it and what’s next for Solar Echoes?

Why did you decide to produce a free orientation guide for Solar Echoes?

We’ve been spending the last month or so trying to promote our physical books and found that running demo’s at places like a gamestore or a sci-fi convention had great results. People really enjoyed Solar Echoes when they had the chance to see it played or even play it themselves, and it was awesome being able to share information about the game with them in person. The majority of the people that played a demo decided to purchase our game books, and it’s exciting to think that they are out there with their friends running their own Solar Echoes missions now.

Online, unfortunately, we don’t have a way to run a demo, but we figured the next best thing would be to provide some setting information and a short tutorial about our combat system. In the Orientation Guide, we have a round-by-round combat sequence detailed in the tutorial, with maps showing the movements of two characters (a Reln martial artist and a Krissethi sniper) trying to take out a robotic security drone. The characters and robot are also fully detailed along with a brief explanation of our skill check system, so it is easy to understand how our combat flows quickly and easily. 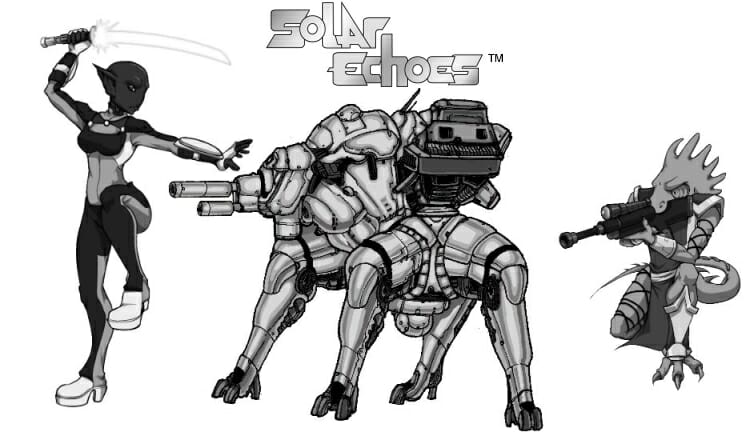 What’s next for Solar Echoes?

We have a lot of things brewing for Solar Echoes, but the next major step is a Kickstarter campaign. Our first print run was expensive, and we’d like to do a second run to generate some more inventory and to add in some tweaks to our books based on player feedback, reviews, and demo’s. The tweaks to one of our books includes a few extra clarifications, some streamlining, and we’re even fitting in some new artwork from one of our artists, Sarah Carter.

Another reason we want to run the Kickstarter campaign is that we think it will help get the word out and hopefully generate more Solar Echoes players.

As a quick example, we were at the Farpoint convention recently and ran demo’s the entire weekend—we had new players for every demo as well as one or two that had already played who wanted to play again and try out a different character. We really wish we could go to every convention and gamestore across the country and run demo’s to let people know about Solar Echoes, but we’re hoping players will start helping us spread the word too. Otherwise, we won’t have any time left to continue the other projects we have planned!

To give you a quick glimpse of other projects we’re working on, we are compiling another book that is essentially an expansion for the game, with new guns, equipment, robots, aliens, lifeforms, starships and other vehicles, and even new ways to play Solar Echoes. Other, smaller projects involve things that would be useful to players or MC’s (GM’s), but those depend more on customer response to our current products. If people keep buying our missions, we’ll keep them coming, but if people seem more interested in pre-generated PC’s, NPC’s, or maps, then we’ll build those.

We’re always planning new things, and we’ve appreciated the player feedback we’ve received so far. Follow us on facebook and let us hear from you at: www.facebook.com/SolarEchoesRPG. 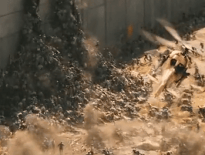 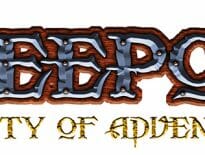