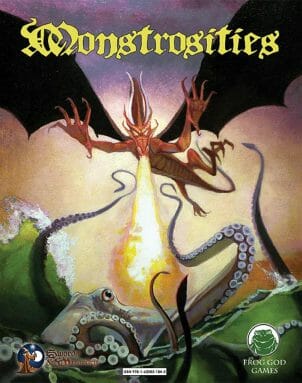 Swords and Wizardry Monstrosities is the largest ever compilation of monsters for Swords & Wizardry from Frog God Games. There are 186 new monsters and hundreds of older monsters from the first edition of the game and they’re all in one place.

Swords and Wizardry itself dates back to the 1970s and Frog God Games’ version is the “unofficial, re-stated version” of the Gygax & Arneson originals. This 544-paged colossus of a supplement includes monstrosities created by fans in the gaming community and therefore is a rather eclectic mix.

With such a large PDF anything the publishers can do to help with the navigation is really useful. I strongly doubt I’ll ever print this beast off and so all my monster hunting will be electronic. I can’t say whether it’s my copy of Adobe Reader playing up or some quirk of this edition of the book by my bookmarks stop at the letter G.

Fortunately the table of contents is thorough; three columns wide and three pages long. It starts with “Aardvark, Giant” and finishes with “Zombie, Raven” if you exclude the encounter tables, rules on creating new monsters and challenge level tables.

As a rule there is one monster per page. With the system it does not take much to present the details of each creature. The chart of hit dice, armor class, attacks, saving throw, specials, move, alignment, number encountered and challenge level just takes up a few lines of text. However, each monster tends to have the text of an encounter idea or alternative stats for size variants of the creature.

For example, the flying zombie-like head of the Vargouille says;

Nearly 40 severed heads of dwarves, elves, humans and even orcs hang from rusting chains in this dark dungeon room. Their eyes and mouths are open, and many still show the terror of their last moments. Dried blood coats the floor beneath the ugly trophies. The wide splotches mar the tile floor. A few of the heads swing slightly in undetectable air currents moving through the chamber. The room smells of decay. Hundreds of chains with empty hooks on the end dangle among the heads. The bodiesare nowhere to be found.

One of the heads is a vargouille that sits on a small swinging platform beneath a rusty chain. The demonic head keeps its wings curled behind it until it rises up to attack. The heads are its trophies from its nightly forays.

One of the big perks of Swords and Wizardry Monstrosities is the number of illustrations. I always value my monster manuals so much more when I can see the creatures being described. I suspect this is partly because I use this books as a source of inspiration. I like to scroll through the pages and soak up the atmosphere and then that atmosphere helps pull adventure and encounter ideas together. Given the huge size of this book it’s impressive the Frog God has the monster:picture ratio that they do. 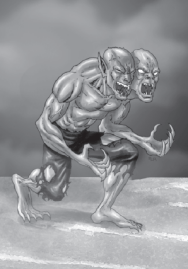 The variety of monstrosities is fairly solid too. There are lots of “giants” that make their way into the book; giant turtles, giant ticks and that sort of thing. There’s also animals I doubt we would consider monstrosities anymore – like the sperm whale. Many of these date back to the origins of the Swords and Wizardry series all those years ago, I suspect, with the more recent additions helping to pepper up the collection.

Overall? Feels like a bit of a no brain. In terms of value for money Swords and Wizardry Monstrosities hits the nail on the head. If you need a truck load of creature encounters for your Swords & Wizardry/0e campaign then this collection should do you for the next 20 years of the game’s life.

Swords and Wizardry Monstrosities is available from DriveThru RPG.