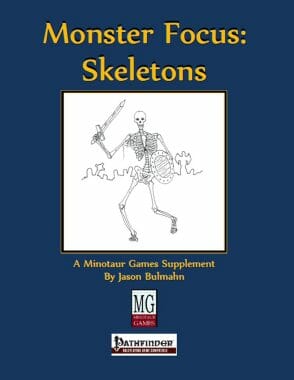 Jason Bulmahn works for Paizo Publishing as the Lead Designer of the Pathfinder RPG. He also runs Minotaur Games as an imprint publisher.

Today, Minotaur Games launched their first product Monster Focus: Skeletons. No surprise that it’s a supplement for the Pathfinder RPG.

The 6-paged PDF will set you back less than $2 and is available from the Paizo store and DriveThru RPG.

There are reviews for the download already, the low price tag encouraging gamers to take a peak, and the ratings are high. Gamers talk about the simple layout, strong content and the use of illustration but wanted more; specifically more skeletons.

Monster Focus: Skeletons is the first in a series of short, easy to integrate suppliments, expected from Minotaur Games. Each one will take a classic monster and present options for player characters and GMs whether that’s new feats, more magic and a way to make the monster a central theme for an adventure.

It is unclear how Minotaur Games will operate alongside Pathfinder. However, there’s no certainty that Paizo will not cover or even contradict topics that Minotaur Games has written on. The imprint seems to be a way for Bulmahn to publish micro-content on his own schedule and for fans to dip in and supplement their Pathfinder libraries when they want.

Tabletop & RPGs Tales of the Sleepless City review
💰 Copper Coins 💰 Geek Native is an affiliate and may earn commission on purchases you make from third-party sites.
🍪 Privacy & Cookies 🍪 The site uses cookies to survive. By accessing the site, you agree to use your browser to control cookie use or take 1d4-3 privacy damage (tracking). If you defeat cookies via ad blocking, please consider the Patreon. An intro to cookies, and how to control them, can be found here. I Manage Cookies