You are here: Home / Books / A Mindjammer review 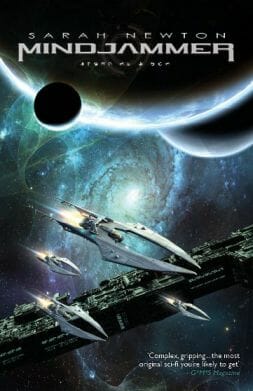 I like the science in science fiction. That’s why I like sci-fi, especially gritty sci-fi but rarely those stories set so far in the future that technology seems like magic.

The protagonists of Mindjammer are those who are sent to planets to ensure the inhabitants can culturally fit into the re-emerging human collective. In particular some cultures struggle with the super high technology. Mankind can now grow Artificial Intelligence by building on the safely recorded mental maps of the dead. These AIs retain some of the memory of the people they were built from.

Some cultures joining the established human government struggle with this concept and confuse the AIs with either the reincarnation or the continuation of the dead.
Mindjammers are spaceships built in this way. They are smart spaceships with the personality of dead people.

Sarah Newton’s engaging epic deals with what happens when one of these crack “cultural protection” teams get caught up in planet wide power struggle over this understanding. Are AIs built from the neural pathways of the dead actually artificial or or not?

Alternatively Mindjammer is a high action sci-fi drama. We’ve combat experts suped up to the max with enhancements and power ups (even an intelligent gun) who battle against a range of exotic aliens and robots.

Or, if you want, Mindjammer is about ship to ship space battles…

I found myself reading the book as if I was following the adventures of a gaming group with PCs in an unwinding and always escalating adventure. Make no mistake; Mindjammer escalates. Although Mindjammer’s main characters have a leader they’re all interesting in their own right and arguably balanced in terms of skill-sets and influence. In terms of plot and drama this gives readers plenty of lines to follow as the plot hooks start to fly.

In some ways Mindjammer is not just a far future sci-fi. It’s also a far future cyberpunk. Mankind is linked by an almost all consuming virtual cyberspace. It is this immersive augmented reality that has become a core part of mankind’s evolution, culture and communication. It links people together as much as it connections high technology and, of course, the artificial intelligences that now populate everything from Mindjammer spaceships to guns and machines.

To be critical of Mindjammer is to highlight the challenge readers might face in just keeping up. There’s a lot going on in the book and it is set in a world that is utterly alien to ours. This is a technology so advanced that it feels like magic story.

I think you’ll know yourself whether Mindjammer is a safe read for you. If you’re a dab hand at coping with advanced sci-fi then pick Mindjammer up straight away. If you, like me, appreciate the genre but know you might struggle with super-hi-tech then give the book a try but don’t try and squeeze it in.

Despite my initial fears that the book would be beyond my comfort zone I really enjoyed it. I wanted to know what happened and I wanted to know more about the galaxy the adventure is set in. This is a gripping sci-fi epic. A sequel feels not only possible but a good idea.

Disclaimer: My copy was provided for review. You can discover more about the book at Mindjammer.com.

Comics Wizards without Coats: Chainmail
💰 Copper Coins 💰 Geek Native is an affiliate and may earn commission on purchases you make from third-party sites.
🍪 Privacy & Cookies 🍪 The site uses cookies to survive. By accessing the site, you agree to use your browser to control cookie use or take 1d4-3 privacy damage (tracking). If you defeat cookies via ad blocking, please consider the Patreon. An intro to cookies, and how to control them, can be found here. I Manage Cookies