You are here: Home / Books / A Glass Thorns: Touchstone review 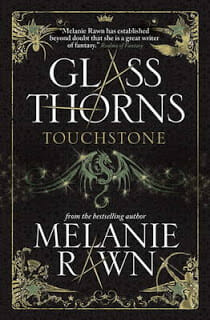 Glass Thorns: Touchstone is the first in a series by established writer Melanie Rawn. It’s an interesting book to review. More on that later.

Touchstone is set in a high fantasy world not terribly long after a terrible magical war. On the surface it seems like quite a cheery world now but scratch below the surface and it gets sinister. Elves, for example, are scared of the dark and start to glow when they’re out a night. The street lights of the kingdom are illumined by the light extracted from darkness tortured elves.

That’s not to say Touchstone is full of conflict. In fact, one of the ways the book is a hard one to sum up in a review is that there’s no big fight. It’s a bit a road movie… but one that very much feels like the start of a much bigger and more complex journey.

The story follows a theatre troop who come to call themselves Touchstone and in particular Cayden Silversun who is part elf, part fae and part wizard. Wizards, effectively, are a race. Cayden is the group’s playwright and the source of their magic power – threatre groups are magical. There is, for example, only one actor – a masquer – who uses magic to play all the parts. At the start of the book the group is missing a key member; a glisker, who manipulates the magic flow and creates illusions. They hire the elf Mieka Windthistle who turns out to be rather more than he seems.

With the appointment of Mieka, the group starts to find success and finds itself with a serious chance of getting out of the lowest tiers of performance and on the Royal Circuit.

The book is really about Touchstone’s attempt to find fame and fortune. The odds look stacked against them. They need their elf Mieka but this is a world where elves face such discrimination that mothers often dock the ears of their children at birth to hide the heritage. Women are not allowed to perform certain key roles or have certain important jobs. Staying legal is one of the conflicts in the book.

There’s a twist. Cayden, our hero, is plagued with visions of the future. If he tries to avoid the bad news he can see coming – he might actually make it happen. What’s more; his grandmother was a villain in the great war. There’s hardship coming.

I said at the start that this is a hard book to review. I’m an experienced fantasy reading, with a desire to read about interesting characters and quite good at working out what’s going on. I struggled with the first couple of chapters with Touchstone. I took it as a challenge and I think I liked it. I was quite happy to follow the progress of the troupe – but was relieved, right at the end, when baddies took a more active role in things.

If you a fantasy book that does things differently and plays the long game then Glass Thorns: Touchstone is for you. If you want battles against orcs then you might get a bit lost with these sorcerers of the stage.

Competition: Tempted by Touchstone? If only you could have a free copy? Check this competition page to see if you’re still in with a chance of winning one!

My copy of the book was provided for review. Glass Thorns: Touchstone, Melanie Rawn, Titan Books. £7.99. 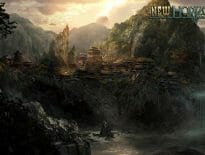 Art The art of New Horizon, a sci-fi RPG 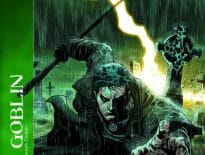