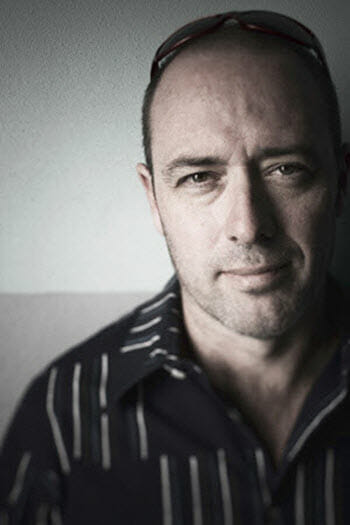 John Birmingham is an Australia based author known for writing detailed alternative histories series. Without Warning is the first of three books that discover what happens to the world after a large energy field, The Wave, wipes out America on the eve of the Gulf War. Without Warning is fresh out in the UK, after being a solid success overseas.

Geek Native managed to grab an interview with Birmingham and asked about the reaction he got to wiping out the States and whether he’d be up for a RPG.

How much research goes into an alternative history novel as detailed as Without Warning?

I started out as a magazine journalist, which is all I ever wanted to be, really. Research is my first love and one of the reasons I do these big alternate histories is because they demand a metric shitload of research to get right. Both the big details and the small.

I’ve never sat down and done the math on exactly how much time goes into research as opposed to writing, but closing my eyes and guesstimating a figure I’d say it’s something like a quarter of the time I spend at the screen.

I love it. I love diving into Google Streetview and wandering around the back alleys of a place like Paris or Rome for a couple of days while I do location scouting. I love searching out travel bloggers who’ve been to those places and written up the most obscure details; the smell of a particular street, the way the sun hits it at a certain time of day. Guys like Freddie Forsyth used to spend a lot of money doing that kind of research. Nowadays it’s all at our fingertips.

On the other hand, I do like to travel and get my feet on the ground too. Quite a few of the American scenes from this series came from me wearing down shoe leather in places like New York and Seattle. And then writing it off on tax! 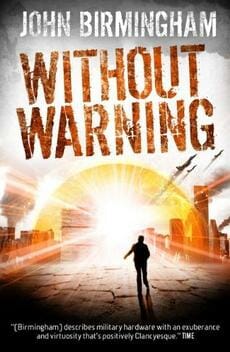 It can get kind of frustrating, sometimes, however. For a previous alternate history series, which involved pushing an aircraft carrier battle group from the future back into World War II – and no, dammit, I hadn’t seen Final Countdown when I came up with that one – I have to spend about four weeks reading Quantum Mechanics for Dummies style primers.

Big, bad things happen to America in Without Warning. Did that earn you any memorable reactions from people?

Surprisingly enough, not from many Americans. They seemed kinda tickled by the idea. Perhaps they thought they might be among the handful of very special survivors. I did see a few people on twitter getting a bit of a stiffy for the whole idea because they thought it would be really cool to wake up one day and find that the US was gone. I don’t think they read the text all that closely.

How much does character narrative influence the alternative events when you write? Or are the events of the new history sacrosanct and the characters left to plot their own way through them?

That’s a surprisingly difficult question to answer and it mines down into the roots of both world building and character development. If the book is working, by about page 30 or 40 the characters will be largely autonomous. They will have their own thoughts, they will follow their own will, they’ll act of their own accord. But I am one of those writers who likes to know where I’m going before I get there and so in very general terms I have a path planned out for them.

The world building, by way of contrast, is kind of a rigid process. I spent a fair amount of time just sitting around scratching my arse thinking through the implications of the what if question. An example from Without Warning is the fate of America’s nuclear plants. Obviously I can’t have them going all Chernobyl or I’d have to write the story set in a poisoned post-apocalyptic nuclear wasteland. That’s no fun.

So I did quite a bit of research on that, and spoke to both people within the nuclear industry, and those opposed to it. They had reasonably predictable responses when I asked them just how safe the failsafe mechanisms at all of those nuclear reactors are. In the end it was a coin toss. I had to go with the opinions of the nuclear engineers – and remember, Homer Simpson is a nuclear safety technician – because they suited my narrative purposes more closely. Do I actually think dozens of nuclear reactors would automatically and safely shut themselves down if humanity suddenly winked out of existence on the North American continent? Probably not.

Is there any competition between the characters, setting and chain of events when writing an alternative history novel?

“Anybody who’s read my stuff knows I’ll happily kill my own babies.”

Always. There was a particular storyline I wanted to end in a pleasingly tragic fashion in the series. Set it up through two books, ready to pay off in the third. I can’t give you any details without going into massive spoilers, but I can say that by the time I got to the point where I was ready to bring down the hammer, it proved to be impossible. Not because I’m a softhearted gimp who can’t kill of his faves. Anybody who’s read my stuff knows I’ll happily kill my own babies. But I found that by the time I had maneuvered my guy to the point where I thought I could set him up for the fall, I couldn’t. Narratively it was just impossible. There was no way of moving him through the story and putting him into the place where I needed him to be without the reader suddenly rearing back from the page in disgust saying, “Way to fuck up my suspension of disbelief, JB.”

What items would you need and what plan would you follow in order to survive in a post-event world like the one created in Without Warning?

Depends where you are of course. If I was floating around the Pacific on a fully stocked yacht with a couple of hotties I’d probably be inclined to stay out there for the duration.

If I was somewhere like London, or one of the major metro centers in Europe and I had any kind of bolthole away from that massive concentration of population, I’d head for it as quickly as possible with freeze-dried rations and weapons. Could be that everything would blow over and you could return home, but I doubt it.

I have a friend who moved to Tasmania a couple of years ago because it struck him as just the sort of backwater you’d want to be in to see out the end of the world.

Is the thrill in a technothriller that technology is essentially dangerous? What’s the attraction in to the genre?

I suspect it’s the same appeal that driving a car has to somebody who has just learned, especially young men. All of our technology is an extension of ourselves, of our will to power over the world. I don’t think it’s a specifically masculine phenomenon to want to reach out and shape the world, to control it and bend it to our will. The French existentialist philosopher Simone de Beauvoir wrote a lot about this in The Second Sex, about the very human need to transcend what she called ‘the immanent.’

Of course there is a simpler explanation in that techno-thrillers are always adventures, and who doesn’t love a good adventure? But you can write a quite thrilling adventure without needing technology to drive it. Adding technological mastery into the narrative limits it, in one sense, driving it along a very specific track. But it also appeals to this very specific element of the human imagination, the one that drove our ancestors to pick up a rock or a club and to turn it on the world as either a tool or weapon.

Would you license the world of Without Warning as a roleplaying game? Either as a computer RPG like the post-apocalyptic Fallout or a traditional tabletop roleplaying game like Dungeons & Dragons?

Oh hell yes! I love the way stories can crossover from one media into another. I’m a big gamer in my downtime – or I would be if I had some more downtime – and I would desperately love to play The Disappearance series as Caitlin Monroe, who’s my favorite character. Alternately it would be cool to just craft a character and set them loose in the story, especially as it develops in the later novels. I feel the same way about fanfiction. Some writers get really uptight about other people messing with their worlds. I’d just love to read some more stories that I didn’t have to take the time to write.

What do you want to write about next?

Having just finished this series, I’ve decided to go back to it in e-book format because there’s a couple of the characters I simply couldn’t let go. Besides, I spent all that time destroying the world and building a new one, it seems a shame to walk away from it. I think shorter, more tightly focused e-books fit more naturally with the way our lives are turned out as well. I just finished reading Peter F Hamilton’s Great North Road last week, partly because I’m a big Hamilton fan and I just wanted to read it, but also because I had set it for the book club at my blog. Great book, but goddamn it was a job of work getting through it simply because of the sheer time required to digest over 1000 pages. Those books will always be around. I’ll even write a few of them myself. But I do enjoy having the option of finishing a story in just a couple of hours, say on a plane flight or even while driving around if I can listen to it as an audiobook.

So, plenty of e-books coming up for me in the next year or so. But I’m also working on a new story world. I like genre mash ups and one that I’ve always wanted to see is a technology versus Magic smackdown. There’s a couple of authors who’ve played with this idea in one way or another, but I have my own take on it that I’d like to work through. In mid-2014 then I’m planning to release three full-length novels, all set in the same story world, all of them released within one month of each other. Probably in your northern summer.

Guess I better get on with writing them.

Geek Stuff Giant raindbow BMO Adventure Time cake
💰 Copper Coins 💰 Geek Native is an affiliate and may earn commission on purchases you make from third-party sites.
🍪 Privacy & Cookies 🍪 The site uses cookies to survive. By accessing the site, you agree to use your browser to control cookie use or take 1d4-3 privacy damage (tracking). If you defeat cookies via ad blocking, please consider the Patreon. An intro to cookies, and how to control them, can be found here. I Manage Cookies