S.D. Perry, author of a supporting host of Res Evil books, first published Code: Veronica in 2001. Titan re-released the book in December 2012. Fancy that; a novel of a horror computer game getting published more than ten years after it first saw print. That says a lot.

I’ve asked around and the consensus seems to be that the game Code: Veronica (Feb, 2000) is perhaps the darkest of the Resident Evil series. It was the fourth game in the survival horror series.

As with S.D. Perry’s Resident Evil: Nemesis book there’s a disclaimer at the start, an apology of sorts, that accepts the mass of contributors to the franchise have not always been able to precisely overlap all the facts and just like Nemesis any inconsistencies fail to disrupt the book. They don’t seem to matter.

Unlike Nemesis this is not a Jill Valentine story. Veronica switches the spotlight back to Claire Redfield and her search for her brother Chris Redfield.

The book certainly manages to capture the dark and tense atmosphere of the game. It rather feels that the book lingers on the Rockfort Island facility for quite a while before rushing off to the Antarctica base. Perhaps that’s game knowledge talking. It’s certainly the case that Rockford is interesting; with a mad scientist using his mutant monsters as weapons and defences. The game had quite a few puzzles and these, I think for the best, are hurried over by the book. We get that the Redfield family makes them staff.

It’s a bit of a shame that neither Alexia nor Wesker get more of a look in… but I have a love/hate relationship with both. S.D. Perry seems to know how to handle them in Code Veronica that means kept in moderation.

A more important character is fellow Island victim; Steve Burnside. The interaction between Steve and Claire is spot on. There’s tension. There’s drama. It feels like the game. 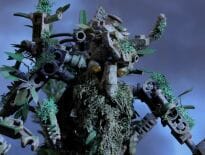