distasteful and inappropriate and do not endorse, condone, or approve of its use with the Dungeons & Dragons game. While the OGL license allows anyone, even our employees, to produce products that are compatible with Dungeons & Dragons, Wizards does not approve or control the theme of any third-party D20 product.

For more information about the OGL, see www.wizards.com/d20.

“Well, everyone has their own philosophy about an optimal game. For some, it’s lots of combat. Others add a bit or a bucket of blood and gore. Some like social intrigues and sessions where combat dice are never rolled. Whatever works for you.

This product is written with those who want to include elements of sexuality in their games. It includes concepts like tantric magic. It explores issues of sex in society. Naturally, it will include rules on STDs and pregnancy.

It’s all about good rules, beautiful or evocative images, and creating an atmosphere of sexuality (though flavor text).

Why would I write it? Hmm. Tough to answer because the question that arises in my mind is why wouldn’t I write it? Is it that much different than a Big Book of Fey, Wizards, or Abominations? Maybe.

Not everyone would have this out on their coffee table. But some people also hide their D&D books when their coworkers come over, too.

It’s really a question of what your interests are and whether you’re comfortable with the topic of sex.

I’ve enjoyed gaming, editing, and writing for years. I’ve also been interested in such works as the Kama Sutra and the Joy of Sex. I feel pretty comfortable with it. And what I don’t know, I research.

Research doesn’t mean boring. It means learning and understanding well enough to give an accurate representation.

I’ve not been pregnant (nor has my coauthor). Does that prevent either of us from finding out about rates of reproduction and rendering it in game terms? No.

I approach it seriously, just as if I were writing a book about the underground and wanted to include information about cave formations. That, too, is all about good mechanics, evocative pictures, and good flavor text.

The topics, vocabulary, and explicitness are different, but my philosophical approach is the same. 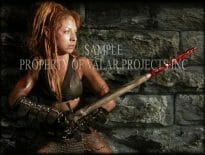