You are here: Home / Games / Tabletop & RPGs / From the inkwell: Solar Echoes and Andy Mitchell 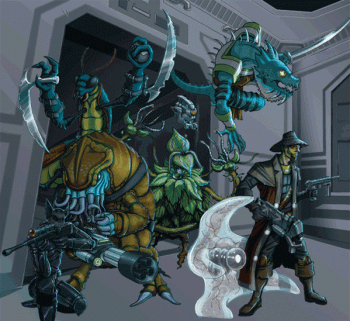 From the inkwell is chance for RPG authors and publishers to step up and talk about their game, setting and mechanics. The goal is to let gamers get inside knowledge straight from the source.

This issue of Publisher Perch is written by Andy Mitchell of Corefun about the sci-fi RPG Solcar Echoes.

We have now released a total of 5 different Missions (adventures) for Solar Echoes, with Mission 5 just released this week. Our missions are only available for purchase online—we don’t intend to bring them to print like we have with our books. We have two types of Missions: Quick, and Extended. Quick Missions are for players who like to finish an adventure in one game session. Extended Missions might require a couple game sessions to finish.

One thing we’ve found during our beta tests is that we’ve never seen people play a mission the same way. We must have run the first mission, “Gun Runners,” twenty or more times and each group of players did something different and unexpected. There is a lot of flexibility in the way we’ve designed things to run, and when writing our missions, we try to set the scenario rather than assume that players should behave or proceed in a certain way. For instance, we write details about what will happen if the players aren’t present, and give some tactical suggestions for how the NPC’s will behave when the PC’s do show up. Our Talent system also presents a number of options for our NPC’s. In one mission, for example, the NPC guards had different responses, depending on how they were attacked. One set of Talents was used if the guard was attacked with a ranged weapon, while another set of his Talents would be used if he was attacked with melee weapons. Still another set of Talents was detailed in his tactical approach if his opponents tried to run from him.

Another thing that is different about our mission design is how we handle experience points—we don’t necessarily reward players for killing anything unless a specific assassination was part of the actual mission. Our missions reward players based on goals achieved and how well those goals were accomplished. Sometimes completing a mission goal might have involved killing the enemies, but there are almost always other options available to the players. I like to compare things to the TV show, “Burn Notice.” The main character in that show, a spy, rarely kills anyone (I can probably count on one hand how many people he’s killed) and the show is now in its sixth season. He almost always accomplishes his goals without killing people using a wide variety of methods. We wanted our game to have options like that; if players want to go through and leave a trail of carnage as is common in a lot of other RPG’s, they can, but they can also choose do handle things differently and use other skills to accomplish mission goals. Don’t get me wrong, Solar Echoes involves a lot of combat—there are lots of guns and other weapons in our game, martial arts, starship and vehicle battles, and fun with explosives. I’m just saying that though a lot of the game is action-focused, we don’t outright reward experience for taking out enemies. Plus, even our hitpoint system is designed to allow for incapacitation instead of death, though the option to finish off an enemy is always there.

We also have a Karma system in our game, and some of the choices players make will affect their Karma. Some XP awards at the end of each mission have positive and negative Karma points attached, depending on how the awards were earned. A significantly negative Karma might make some things much more difficult for a character, while at the same time open up other “opportunities” that weren’t available before. The same is true with a notably high Karma.

Another aspect of our missions that is notable is that they have Story Arcs. At the end of some missions, there are details about how the after-effects of a mission can be further developed into other missions. At the end of others, there are random bits of news that the Mission Controller (GM) may sprinkle throughout the adventure as “flavor,” seemingly random news bulletins mixed in with other news reports that are actually build-ups to later missions we’re already writing or planning. Basically, players might unknowingly get a hint at things that are developing in the universe around them, which may develop into a situation that would require their involvement in a related mission someday.

Here is a list of the first five Solar Echoes Missions that are currently available at www.rpgnow.com: 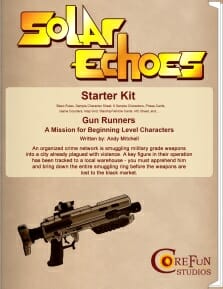 A Quick Mission for characters of levels 1-3, ready for easy insertion into an existing campaign

An organized crime network is smuggling military-grade weapons into a city already plagued with violence. A key figure in their operation has been tracked to a local warehouse – you must apprehend him and bring down the entire smuggling ring before the weapons are lost to the black market. 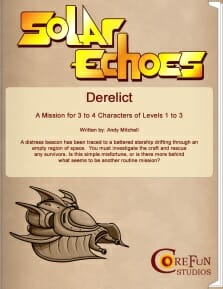 A Quick Mission for characters of levels 1-3, ready for easy insertion into an existing campaign

A distress beacon has been traced to a battered starship drifting through an empty region of space. Were they attacked, or was this simple misfortune? Mysteriously, there is no sign that the crew or anyone else escaped. 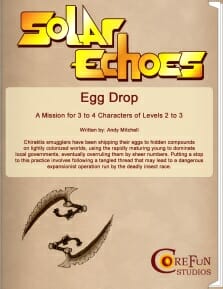 An Extended Mission for characters of levels 2-3

Chiraktis smugglers have been shipping their eggs to hidden compounds on lightly colonized worlds, using the rapidly maturing young to dominate local governments, eventually overruling them be sheer numbers. Putting a stop to this practice involves following a tangled thread that may lead to a dangerous expansionist operation run by the deadly insect race.

Mission 4, A Test of Strength 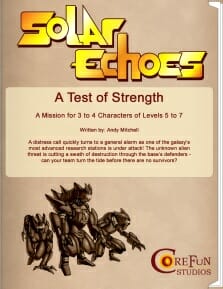 A Quick Mission for characters of levels 5-7, ready for easy insertion into an existing campaign

A distress call quickly turns to a general alarm as one of the galaxy’s most advanced research stations is under attack! The unknown alien threat is cutting a swath of destruction through the base’s defenders–can your team turn the tide before there are no survivors?

[Solar Echoes Mission 4, A Test of Strength at RPGNow]

Mission 5, Blessed are the Peacemakers 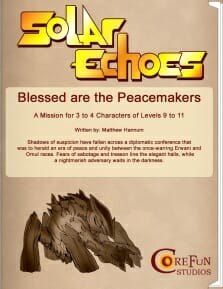 An Extended Mission for characters of levels 9-11

Shadows of suspicion have fallen across a diplomatic conference that was to herald an era of peace and unity between the once-warring Erwani and Omul races. Fears of sabotage and treason line the elegant halls, while a nightmarish adversary waits in the darkness.

[Solar Echoes Mission 5, Blessed are the Peacemakers at RPGNow]

From the inkwell: Solar Echoes and Andy Mitchell 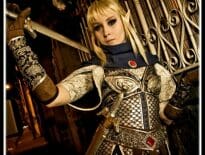 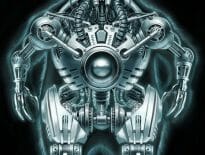