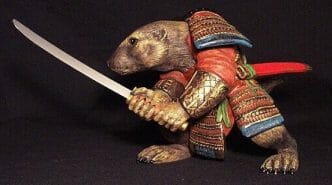 Mongoose Publishing is a British RPG publisher. They grew quickly and cleverly during the d20 and OGL era and has been wise with license deals since. I get the feeling unpleasant staffing decisions are taken bravely as and when they’re needed.

Despite all this savvy, Matthew Sprange, the owner, has reported a pretty bleak picture in the State of Mongoose 2012.

Sprange makes it clear that print products will always be available from Mongoose. He does not say how traditional those printed books will be; limited editions, Kickstarter supported, print-on-demand and other routes, I imagine, may be the future.

The current RPG market is miserable. There really is no other word for it. I was talking to the owner of a certain well known RPG company just a little while ago, and he mentioned that he had sold a few hundred of his latest release. We agreed it was a good total in this day and age for the average RPG product (not saying his book was average but… oh, you get the point!). Then he dropped the bombshell; he had reliable information that his book had outsold the latest supplement of a very well known, not to mention market-leading, game.

(If you are the aforementioned owner then please get in touch!)

Later on, the same theme;

Last year I said the RPG market had a pulse, but that is about all that could be said for it. I also said that I thought the bottom point had been reached. Ha!

As I said previously, the market for printed books is dire, a pale, pale shadow of what it was ten years ago (from now on, we’ll call 2001 ‘the Golden Age’).

So, if the Golden Age of roleplaying publishing is over, is there any hope at all? Sprange thinks so. The future he sees is digital.

On the other hand, RPG sales among PDFs, spearheaded by DrivethruRPG.com, are fairly booming. Which, of course, brings us to the inevitable question; is digital taking over?

Later on, the Mongoose master answers the question;

However, the tipping point between digital and print has been reached among RPGs. The days where we automatically printed x thousand copies of all titles are long, long gone.

Is there any room for debate? It doesn’t seem so as further down the length report, Sprange notes;

The digital change is a-coming, whether you are ready for it or not!

There are some twists. Astutely, Matthew remarks that although roleplayers have adopted digital and PDFs – warhammers have not.

It’s hard to take Mongoose’s experience and tell them that they’re wrong. There are certainly some unique challenges that Mongoose Publishing faced this year – including changing the way they published and promoted their schedule and moving from a having half a dozen full-time writers to having none. This year Mongoose gave all their writing to freelancers.

What’s your take on the RPG market this year? Has it been as clear cut as Mongoose say it has been for them?

Art Final Fantasy style Twitter Fail Whale
💰 Copper Coins 💰 Geek Native is an affiliate and may earn commission on purchases you make from third-party sites.
🍪 Privacy & Cookies 🍪 The site uses cookies to survive. By accessing the site, you agree to use your browser to control cookie use or take 1d4-3 privacy damage (tracking). If you defeat cookies via ad blocking, please consider the Patreon. An intro to cookies, and how to control them, can be found here. I Manage Cookies