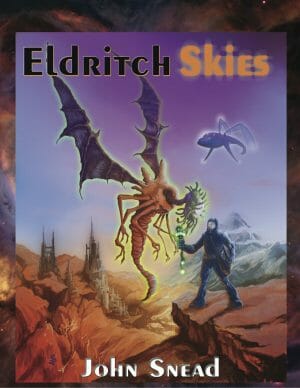 Eldritch Skies is a Lovecraftian sci-fi RPG from Battlefield Press. The game is written by John Snead and is set in 2030. The post below is a design essay from the game’s creator.

The seed for this project originated in a discussion on RPG.net back in 2006. Science fiction is my favorite genre in which to read, write and roleplay. I also very much admire H.P. Lovecraft and the other early mythos authors like Clarke Ashton Smith as SF authors and fantasists, as well as horror authors. In one of the many threads about Lovecraft’s mythos, I mentioned that what I’d love to see or write someday was an RPG that focused on the SF aspects of Lovecraft’s work, rather than on the horror aspects, which the vast majority of modern mythos fiction and mythos RPGs emphasizes.

I’d worked with Jonathan Thompson before, and we got to talking about this idea in email back in 2006. Other projects took up our time for a while, but in 2010 our schedules lined up and we were able to get moving on this project. I was also motivated at that time by the desire to write another Unisystem book. Since I finished The Magic Box for the Buffy RPG back in 2002, Unisystem has been one of my favorite systems to run and play. The need for a science fiction rulebook for Unisystem was apparent, and I thought it was a perfect fit for Eldritch Skies, so when Jonathan mentioned he had a Unisystem license, I knew it was time to start writing.

The basic ideas I worked with were pretty simple. Lovecraft’s mythos stories were at least as much SF as they were horror. Some of his work, like “The Thing on the Doorstep”, or The Case of Charles Dexter Ward, are absolutely classic horror tales, but stories like “The Shadow Out of Time”, “The Whisperer in Darkness”, and especially “At the Mountains of Madness” are all clearly science fiction stories. Of course, they are also science fiction of the 1920s & 30s. Lovecraft designed some of the most wonderfully alien intelligent beings in the history of science fiction and when it was appropriate, he used some of the best science of the day in his stories. I wanted to update both the science and technology and the social mores to reflect modern improvements, while remaining true to the character and flavor of Lovecraft’s mythos. So I started thinking about a vision of a near future set in a world where Deep Ones live under the ocean, Mi-Go visit Earth, and where the Elder Ones came to Earth almost a billion years ago.

My goal was to create a game set in a version of the Cthulhu Mythos that was not only more focused on SF than horror, but also avoided bleak nihilism. This may seem like an odd choice to many people, since many people now assume that any setting described as Lovecraftian must be definition be on the very brink of some terrible and ultimately unavoidable doom. But I think this is a limited view. There is great roleplaying potential in Lovecraft’s work that isn’t dependent on nihilism; I don’t see that as at all the only way to view Lovecraft’s mythos. In Lovecraft’s work, humanity is not in imminent danger of extinction or horrific transformation. In “The Shadow Out of Time”, the narrator talks with people and aliens from the past and the future, including an Australian physicist from the 26th century, an and a human philosopher from the 50th century, both from times when humanity still exists and is not ruled by Cthulhu. 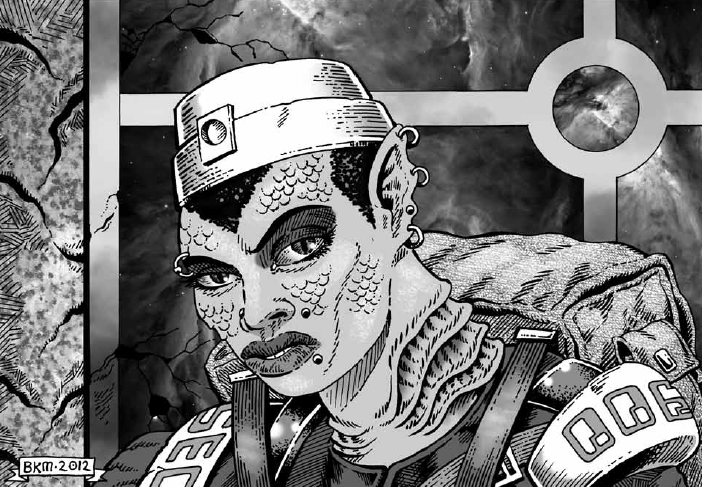 One of the essential truths of Lovecraft’s cosmology is that entropy and the other cosmic forces (as personified as the Other Gods and Great Old Ones) are far greater than any civilization or species, including humanity. Although humanity is ultimately doomed to becoming extinct and eventually forgotten, this fate may not occur for tens of thousands or even tens of millions of years. The Mi-Go and many other aliens have all survived for longer than that, and from my perspective there’s no reason why humanity couldn’t manage to so do as well.

Lovecraft’s cosmic horror is horror on a cosmic timescale, not the immediate horror of impending destruction. However, in this setting, humanity is merely one of hundreds or perhaps thousands of intelligent species throughout the galaxy, which evolve, develop civilizations of various sorts, and then die off, leaving behind only weathered ruins and inscriptions in lost languages to mark their passing. The great question is what happens in the meantime – how humanity develops in its adolescence as a species, whether we make rash choices that send our civilization to an early doom or move on to a new stage of being.

This focus on both deep time and on the alien and uncaring nature of the cosmos is in many ways surprisingly similar to modern transhumanist space opera stories of the sort written by authors like Alastair Reynolds, Linda Nagata, and many others. In these stories, aliens are not remotely humanoid; they are completely inhuman both mentally and physically. Humans and aliens in these stories enhance their bodies and minds using advanced technologies, and the galaxy is littered with the ruins of aeons-old civilizations that rose and fell well before vertebrate life evolved on Earth.

To create the history and background of Eldritch Skies, I started with a continuity where aliens first visited Earth during the Pre-Cambrian, where hyperspace was a dimension or series of dimensions where monstrous beings lived. I then considered the implications of a setting where dreams connected the dreamer to a psychic realm of the collective unconscious, and where a brilliant psychologist had invented technological telepathy in the first decade of the 20th century (in “Beyond the Walls of Sleep”). I did my best to fit all of the creatures and incidents from these stories into a modern SF setting where the basic cosmology was Lovecraft’s. From there I created the history of the rest of the 20th century, and extrapolated forward into a science-fictional continuity of the early 21st that I think is both plausible and fun to game in. I also brought A.J. Luxton on board to create fiction that gives gamers a jumping-off point for this perspective on the Lovecraftian universe and the sense of possibility inherent in it. 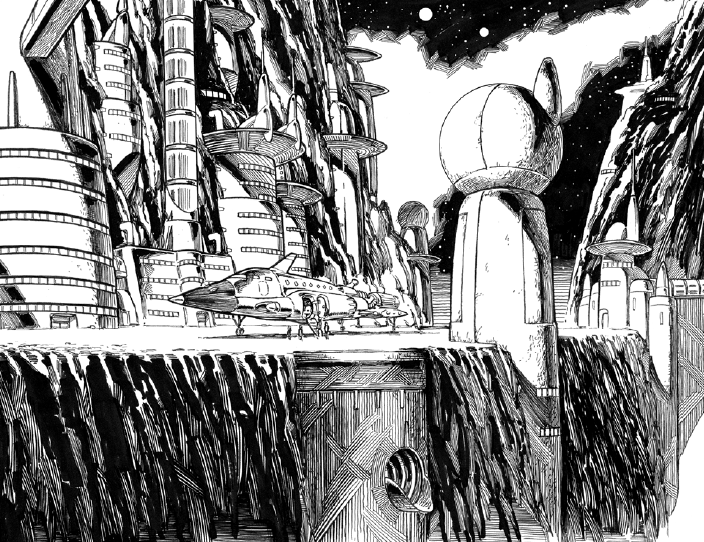 I set the game in 2030, because that’s approximately a century after Lovecraft wrote his mythos stories. However, this is a world with a history very different from ours. In Eldritch Skies, humanity started building starships in the late 1990s and established the first interstellar colonies in the first years of the 21st century.

I initially considered the “secret history” model, having most of the mythos be known only to government officials, cultists, and a few researchers, but several of my friends suggested that it would be far more exciting and original for most mythos truths to be publically known. Still, it seemed obvious to me that various governments would initially do their best to keep the public from finding out that aliens visited and continue to visit the Earth and that inhuman fishmen live in the oceans.

I had designed a timeline which initially looked a great deal like our own history. World War II happened pretty much as it did in our world, and the Cold War dominated most of the second half of the 20th century. However, for much of this history, various governments, including the US and the USSR, were making use of alien relics recovered from ancient ruins or modern-day aliens. When I looked at this timeline, I realized that the collapse of the Soviet Union was a perfect opportunity for knowledge of the mythos to become public. Hence the so-called Great Revelation of the late 1980s, where the mass media and the general public learned most of the secrets about Earth and the various aliens, became a defining moment of Eldritch Skies. This event is where the timeline went from one that superficially resembled our own history, to one where the general public found out that the UN had secret treaties with the Deep Ones and the Mi-Go. The public also learned that US astronauts and USSR cosmonauts had been visiting Mars and other planets in the solar system since the 1970s using either hyperspatial gateways or spaceships that flew in a manner similar to the Elder Ones or the Mi-Go.

Of course, this game was far more than an exercise in creating a nifty alternate history. Playability and fun were also at the forefront of my mind. I wanted to create a game that would accommodate a wide range of play-styles and different campaigns, as this is the type of game I most prefer. So I wrote an extensive storytelling chapter that discusses both Earth based campaigns focused around intrigue, mysteries, and hunting cults and monsters, and space-based campaigns that focus on exploration, discovery, alien contact, and alien threats. I also gave several options for using Drama Points, which are an important feature of Cinematic Unisystem. While gritty horror isn’t my personal gaming style, I provided rules for gamers who want a traditionally deadly mythos game to play Eldritch Skies that way, with a play-style option to design stories and use (or more accurately not use) Drama Points to fit that campaign style. Similarly, I know some people will want to play Eldritch Skies as gonzo pulp SF along the lines of Indiana Jones or Captain Kirk vs. Moonbeasts and Flying Polyps, and provided Drama Point rules for games with this intent. My own vision of Eldritch Skies is a somewhat cinematic game far closer to StarGate SG-1 or maybe Babylon 5, but with aliens that are far stranger and less human: this option is also detailed in the game. I did my best to create a game that will have a broad appeal for fans of both science fiction and Lovecraft by planning for a multitude of gaming styles and writing with the innate versatility of Cinematic Unisystem in mind.

When Eldritch Skies reaches the market this winter, I’d love to hear what you do with it in play, whether your game adheres to the core setting or uses the rules as grist for other SF games in the Cinematic Unisystem.

Art ScaryGirl totem
💰 Copper Coins 💰 Geek Native is an affiliate and may earn commission on purchases you make from third-party sites.
🍪 Privacy & Cookies 🍪 The site uses cookies to survive. By accessing the site, you agree to use your browser to control cookie use or take 1d4-3 privacy damage (tracking). If you defeat cookies via ad blocking, please consider the Patreon. An intro to cookies, and how to control them, can be found here. I Manage Cookies