You are here: Home / Books / Spartacus: Swords and Ashes review 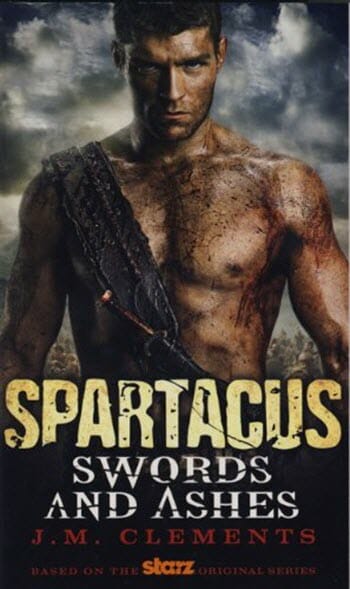 Swords and Ashes is set in the Spartacus world when our hero gladiator is the new Champion of Capua.

The book is one of the double-dealing and greedy world of prestige and politics. Action begins, as is typical to Spartacus, with casual sex, in public, which then becomes violence, death, slave revolt and murder.

The murder sets up the plot. Ianista Quintus Batiatus sees the chance to profit from the death of the rich man. The action is quick, chances to catch your breath are few and far between. Popular names like Crixus, Oenomaus and even Lucretia feature.

The villain, one of the villains, of the book – Verres – is horrible. That’s just ideal for a Spartacus book.

I’ve read Spartacus: Morituri and there it was the dialogue that sold the setting to me. Sure, Morituri had lots of other Spartacus elements but it was the character interaction that created the flavour. It’s different in Swords and Ashes. Yes, the dialogue is not entirely in ‘vanilla’ English but its really the plot that makes the book feel so Blood and Sands for me.

Spartacus: Swords and Ashes was penned by J.M. Clements and it seems like he’s researched his subjects well. He has already written plenty; Pirate King, Marco Pola and A Brief History of the Vikings. Geek Native readers may also note that Clements has audio books and radio plays to his name too; Robin Hood: The Deer Hunters, Highlander: THe Secret of the Sword and Doctor Who: THe Destoyer of Delights.

Clements’ has mastered the extra needs of a Spartacus book. Swords and Ashes will surely appeal to Sparatacus fans and, unusually, this book feels like it might appeal to readers who did not care much for the TV series. That’s a hard trick to succeed at.

Competition! Reading this review before October 12th, 2012? You could win a box set copy of the second season of Spartacus: Vengeance!

Disclaimer: My copy of Spartacus: Swords and Ashes was provided by Titan Books, the publishers.

Sites Kickstarter launches in the UK

Comics The scary new Joker
💰 Copper Coins 💰 Geek Native is an affiliate and may earn commission on purchases you make from third-party sites.
🍪 Privacy & Cookies 🍪 The site uses cookies to survive. By accessing the site, you agree to use your browser to control cookie use or take 1d4-3 privacy damage (tracking). If you defeat cookies via ad blocking, please consider the Patreon. An intro to cookies, and how to control them, can be found here. I Manage Cookies