Warning – this post strays dangerously close to American politics. This blogger is Scottish and safely insulated from that sort of thing.

So why blog at all?

We’re talking about a gamer here and someone who’s being accused of double-standards and living in a fantasy world just because she games.

The Maine State Senate candidate Colleen Lachowicz plays World of Warcraft. She plays it quite well because she’s reached level 85 as an orc assassin.

In response, rivals have created Colleen’s World to dredge up anything she might have said that might be used against her. They seem to favour this quote;

So I’m a level 68 orc rogue girl. That means I stab things… a lot. Who would have thought that a peace-lovin’, social worker and democrat would enjoy that?! 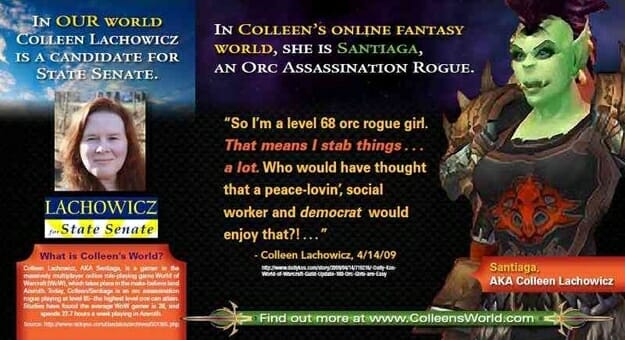 Political rivals say that Maine need a state senator who lives in the real world, not in Colleen’s fantasy world.

Perhaps everything is fair game in politics but it’s disheartening to think that being a gamer should be something considered secret or shameful. It’s infuriating to think that people would suggest we’re less good at our jobs or dealing with people just because we’re gamers.