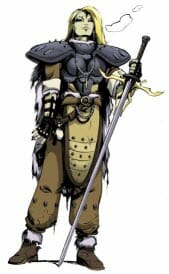 Arx Fatalis is a brand new CRPG from JoWooD. It’s a rather rare creature in that it’s a first person RPG and so if you’re entirely fed up of watching the back of people’s heads as they run around a 2D environment then the game will be a welcome change for you.

Arx Fatalis is set in a world that’s gone underground – literarily. The dying sun as forced communities to relocate under the surface of the earth and build underground towns and cities. The races worked together to escape the ice and winter death of the topside but as the game begins the relations between the different communities are breaking apart.

GameWyrd was lucky enough to get an advanced copy of the full game and you can read one of the very first reviews for the CRPG here.

In addition, this Echoes from the Wyrd has a special preview gallery of images which shows off the wonderful graphics in the game. Now, we admit it, some of the big CRPG sites are showing off some screenshots from the game… but we’ve also included the original concept artwork for the game. We think these original illustrations are something special and of particular appeal to CRPGers and RPGs alike!

I remember the day I met him only too well. He was walking down the street, cane clicking on the cobbles. Big as a tree he was, and dark as pitch. It was like the light was afraid of him, or he was more real, because my lantern light seemed to shrink back from him and he was all surrounded by shadow.

He walked right past me and I just stood frozen in place, staring open-mouthed like a babe. His eyes… They were aflame, dancing as if all the fires of hell were behind them. Chilled me to the bone like nothing else I’ve ever seen. And I shan’t do again, I imagine (how wrong I was).

He looked at me as though he’d never seen my kind before, pursing his lips and studying me thoughtfully. It was as if he knew me somehow. Then he drew himself close, until his cheek was almost pressed against my own. I could feel a chill about him and he smelled like mothballs, only older and more faded. Ancient, somehow.

“Hello Devin.” He said with a thick accent that I couldn’t quite place. He drew himself upright and gave me a smile that could have been a sneer. It looked hungry. I felt like a rabbit about to be eaten by a wolf. But he didn’t eat me. He reached forward and gave me a package. Something hard wrapped in black velvet.

“Take it.” He said emotionlessly. “It contains the answers to all of your questions.”

I tucked the book into the folds of my robe and stood mutely before him. Satisfied, he tipped his hat to me and vanished, right before my eyes into thin air.

Even though he was gone, or at I could no longer see him, I could still hear his voice in my head.

“Darkness is rising.” He said. I blinked, and listened for a moment longer, yet the voice was silent.

I wonder what he meant by that?”

Necromancer’s Legacy is in the final stages and is looking great, written by the ENnie winning Jason Parent from Ambient this look at the Necromancer is not to be missed. Here are a two of the internal pieces of art from this book by Scott Purdy and Patricio Soler. This book will be available in November 2002 from Mystic Eye Games.

The following text is an exclusive peak at the Special Attacks and Special Qualities for Necromantic Constructs.

Special Attacks: A necromantic construct retains all the special attacks of the base creature, except they lose spellcasting and manifesting capabilities. IN addition, flesh constructs gain the following:
Rotting Touch (Ex): Any living target damaged by an attack from a fresh necromantic construct is exposed to the construct’s creator’s choice of standard (non-magical) diseases. The standard choice is Filth Fever.

Click on the images below to reload them in full size: 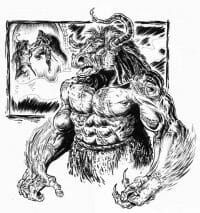 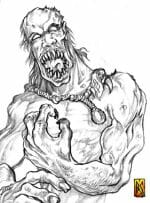