You are here: Home / Books / Charlotte Markham and the House of Darkling review 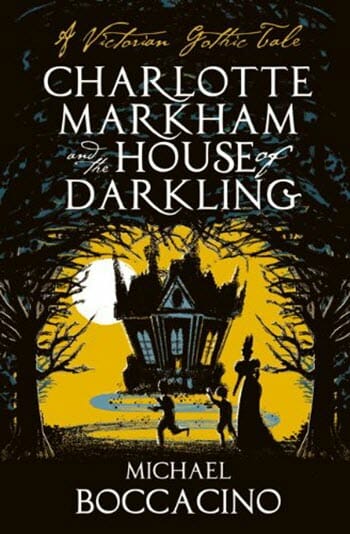 It’s quite hard to describe Charlotte Markham and the House of Darkling. It reminded me of a cross-over of an H.P. Lovecraft and an Euphemia Martins mystery. The latter being a quirky historical mystery featuring a plucky and curious maid who, due to family death, is working for a rich family even though her own family has pretty good social statue. The former involves dark, surreal and meddling powers from beyond time and space.

It’s a strange mix but Michael Boccacino makes it work. It’s not a surprise that people compare his style to Burton or Gaiman.

Nanny Prum is murdered in a strange and messy way. This means the recently hired governess Charlotte Markham has to adopt additional responsibilities in looking after two boys. The boys are already badly off, suffering from the death of their mother.

Upset children insisting their mother isn’t really dead; a governess still disturbed by deaths in her family; a father who is rarely seen – it all seems to be the perfect set up for dark and broody household.

The House of Darkling is somewhere else, though. This isn’t a simple haunted house story. Darkling is the name of the manner, somewhere in a realm called The Ending, that Lily Darrow, the dead mother, has also accepted the position of governess.

In some ways, despite the mystery and the creatures who do not know death, the novel is one of relationships; the awkward relationship between the governess Charlotte Markham of Everton manner, who looks after the children of Lily Darrow, the new governess of the House of Darkling.

The alien entities that make up a significant chunk of Baccacino’s dark mystery are wrapped in human skins (perhaps literarily) most of the time. This allows us to enjoy truly odd scenes where crawling chaos sits down to tea with English ladies worrying about proper etiquette.

Despite its strangeness, Charlotte Markham and the House of Darkling is an easy read. It deserves a sequel .

Charlotte Markham and the House of Darkling review

Geek Stuff Happy Hobbit Day
💰 Copper Coins 💰 Geek Native is an affiliate and may earn commission on purchases you make from third-party sites.
🍪 Privacy & Cookies 🍪 The site uses cookies to survive. By accessing the site, you agree to use your browser to control cookie use or take 1d4-3 privacy damage (tracking). If you defeat cookies via ad blocking, please consider the Patreon. An intro to cookies, and how to control them, can be found here. I Manage Cookies