You are here: Home / Games / Tabletop & RPGs / The Dungeons and Dragons lawsuit: Hasbro to sue Atari

Wizards of the Coast’s parent company Hasbro is believed to be on the verge of suing computer games company Atari in a squabble over licensing rights for D&D.

Hasbro claims that Atari breached the licensing agreement when the computer game maker sold its European business arm to Namco Bandi. Hasbro also feels that they were misled on the Atari-Namco deal. Hasbro wants damages and for the deal to end – they want the D&D digital rights back.

Greg Leeds, president and Wizards of the Coast, told trade press; “We have been working for several months now to reach resolution with Atari, and they have left us with no other choice than to pursue legal action.”

Atari also issued a carefully worded reply; “Atari has sought to resolve the matter without cooperation from Hasbro. We regret that our longtime partner has decided to pursue this action.”

So, reading between the lines… what do we make of this?

At a glance, it suggests that Hasbro fancies trying to make some money off the digital rights to Dungeons and Dragons and is annoyed this isn’t happening with Atari.

Hasbro may feel that Atari simply engaged in a bit of license rights arbitrage with Namco – and shafted Hasbro on the profits.

Hasbro may feel that neither Atari or Namco are pushing D&D hard enough in the digital marketplace. Not only does this represent a loss of possible earnings but means D&D is failing to put itself in front of the new digital gaming generation – kids who would have otherwise naturally turned to tabletop gaming.

Hasbro may also feel that they can make more money (and perhaps do a better job) by pushing D&D in a digital format themselves.

In particular, I’m thinking about the battles Hasbro and Mattel had with the digital rights to Scrabble – they licensed those out, someone else made a Facebook app that become hugely popular and that left the two gaming giants fuming.

There is, of course, a very popular Dungeons and Dragons Facebook game – Tiny Adventures. That’s been built by Wizards of the Coast themselves, though, not a licensee or a third party.

The Dungeons and Dragons lawsuit: Hasbro to sue Atari 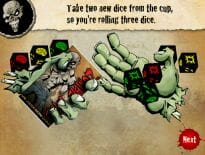