You are here: Home / Books / Comics / Batman: The Return of Bruce Wayne

Batman was kidnapped, tortured and apprently killed by Darkseid, Jack Kirby’s vision of Hitler as a giant, stonefaced spacegod. Upon hearing of his death, Dick Grayson (the original Robin) took up the mantle of the Bat, with Bruce’s bastard (in pretty much every sense) son Damien as his new Robin. Except Bruce wasn’t really killed, rather the evil spacegod’s death-ray actually sent him back to prehistoric times.

Still with me? Well the current Batman comics are a lot of fun, with a lighthearted Batman and a scowling badass Robin offering a nice reversal of the original dynamic. But we all know that Bruce Wayne will be back, and probably before Christopher Nolan begins working on his third movie (I’m betting either Batman Continues or The Caped Crusader will be the title, but I digress).
This has now been confirmed by current Bat-Scribe (and weegie) Grant Morrison. He’s penned a six-part mini-series called The Return of Bruce Wayne starting in April 2010. I’m going to let him explain it himself, via a couple of quotes from his USA Today interview:

Return is a fairly intricate time-travel story in which the world’s greatest hero, the optimum man, is up against the supreme challenge to his ingenuity and skill. How does Batman get out of the ultimate trap? It has a mystery and an apocalyptic countdown going on, there are some major twists and reveals, and it sets up big changes to the Batman universe status quo.

The first episode is set in the Late-Paleolithic Era, the second is in Pilgrim-era Gotham Village, and we also get to see Gotham in Western or noir style.

Each of the stories is a twist on a different “pulp hero” genre — so there’s the caveman story, the witchhunter/Puritan adventurer thing, the pirate Batman, the cowboy, the P.I. — as a nod toward those mad old 1950s comics with Caveman Batman and Viking Batman adventures. It’s Bruce Wayne’s ultimate challenge — Batman vs. history itself!

I dunno about you, but I’m excited about this. But as they say, a picture tells a thousand words: 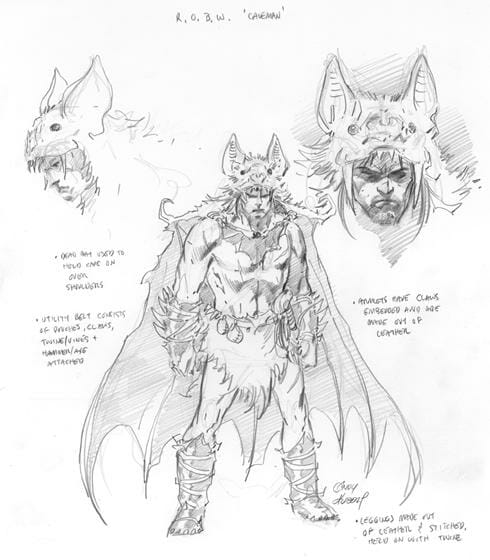 In the meantime, if you want to know what Bruce’s been up to, there’s a twitter feed claiming to be the man himself! Even in ancient times, he’s somehow managing to tweet!

Batman: The Return of Bruce Wayne

Movies “Schizophremic” typo in the DX01 Joker…
💰 Copper Coins 💰 Geek Native is an affiliate and may earn commission on purchases you make from third-party sites.
🍪 Privacy & Cookies 🍪 The site uses cookies to survive. By accessing the site, you agree to use your browser to control cookie use or take 1d4-3 privacy damage (tracking). If you defeat cookies via ad blocking, please consider the Patreon. An intro to cookies, and how to control them, can be found here. I Manage Cookies