You are here: Home / TV / Anime / A preview of Mass Effect anime Paragon Lost – do people hate it?

Dailymotion posted a video from SXSW of Funimation‘s Mass Effect 3. Okay, there’s also about a quarter of the video given over to the Dragon Age anime too – but that’s no hardship.

We find out that James Vega will be the main character. We’ll find out all the stuff he’s been up to. Funimation seem to be enjoying working within the Mass Effect universe.

The video came out on the 10th. That’s the start of the weekend and it has three times as many dislikes as likes. That’s pretty rare for a video. Is it because people dislike Vega as a character or is a backlash against the unpopular Mass Effect ending?

A preview of Mass Effect anime Paragon Lost – do people hate it? 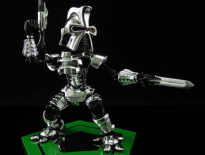