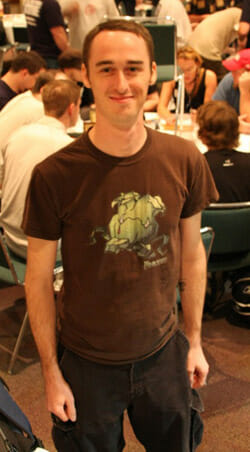 Freelancer Adam Daigle is being pulled in by Paizo to work full time on Pathfinder. Daigle has written for the popular game before – starting with Bestiary #19 back in 2009 as well as features like “In the Fiend’s Grasp” and “Uringen”.

In a press release, Adam said;

“As a freelancer, I’ve loved working with this crew in helping to build the world of Golarion and Pathfinder Roleplaying game, but that pesky day job kept getting in the way of giving more,” said Daigle. “I’m thrilled to be able to accept this position to give my full attention to this fantastic game and its community. This personal life transition was partially facilitated by the sage words of Hunter S. Thompson, ‘When the going gets weird, the weird turn pro.'”

The same press release from Paizo refuses to mention Dungeons and Dragons by name. Instead they say;

The Pathfinder Roleplaying Game is a fully supported tabletop RPG, with regularly released adventure modules, sourcebooks on the fantastic world of Golarion, and complete campaigns in the form of Pathfinder Adventure Paths like Skull & Shackles and The Rise of the Runelords. The Pathfinder RPG is also compatible with the 3.5 edition of the world’s oldest roleplaying game.

Pathfinder continues to provide a tempting home for old school D&Ders. It may be doing especially well since the announcement of DnD Next as the fifth edition of the world’s oldest roleplaying game.