You wouldn’t like me when I’m hard up for cash.

CCTV footage has captured the brazen – and successful – attempt to rob a bank in New York. The robber, described as a white man in his 20s, wearing a jacket with a fake fur collar added a Hulk mask to his get up.

The Hulk imposter used a gun to force an undisclosed amount of cash to be handed over to him which he stuffed into a cloth bag before making his escape. 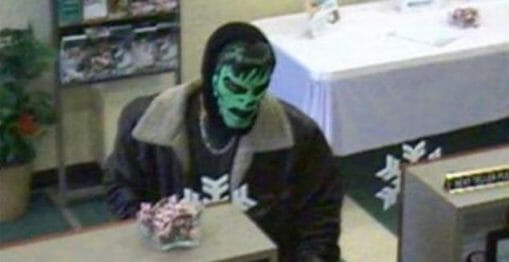 CCTV footage still of a nan in a Hulk mask robbing a bank. Photo by Rex Features

Comics Who fights who? The Avengers Vs X-Men match ups
PC Last chance to win Tera beta pass
💰 Copper Coins 💰 Geek Native is an affiliate and may earn commission on purchases you make from third-party sites.
🍪 Privacy & Cookies 🍪 The site uses cookies to survive. By accessing the site, you agree to use your browser to control cookie use or take 1d4-3 privacy damage (tracking). If you defeat cookies via ad blocking, please consider the Patreon. An intro to cookies, and how to control them, can be found here. I Manage Cookies