You are here: Home / Games / PC / The Diablo III mini-movie – the Black Soulstone

This is almost a mini movie. It’s a very long trailer. I think the phrase we use now is “cinematic”. It’s a chunky slice of video to get you to invest in the Diablo III world. It certainly looks great to me! I sense Diablo III is going to be pretty gritty.

In the Diablo featurette we get to watch Deckard Cain’s niece, Leah, try to make sense of her uncle’s research. Without warning she’s given a vision; Azmodan, Lord of Sin, is after the Black Soulstone and will use his Hellborn armies to scour the world to find it.

Diablo III is expected out early next year. Blizzard have been working on it for yoinks – it was first officially announced back in 2008. You might recognise the name Deckard Cain too. He’s been in both Diablo and Diablo II as the chap you take things to in order to identify them.

Can’t wait for this! C’mon Blizzard, get it out already! 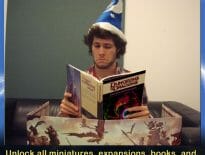