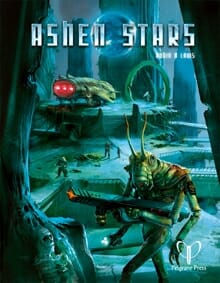 Ashen Stars is a new game from Pelgrane Press. It hit the shelves at the start of the month.

The game uses the Gumshoe system by Robin D. Laws and draws on the artistic talents of Jerome Huguenin and Chris Huth.

In this gritty space opera game, the PCs are Lasers, freelance troubleshooters and law enforcers operating in a remote sector called the Bleed. They’re needed in the wake of a massive retreat by the Combine, the utopian empire that colonized it. Amid the ashes of a devastating war, the lasers solve mysteries, fix thorny problems, and explore strange corners of space—all on a contract basis.

They balance the immediate rewards of a quick buck against their need to maintain their reputation, so that they can continue to quickly secure lucrative contracts and pay the upkeep on their ship and their cyber- and viroware enhancements. Featuring seven new and highly detailed playable species –

Pelgrane have updated their Ashen Stars resource page to include black character sheets, tables and charts for download. There’s also the downloadable introduction story called “Stowaway” which is designed to be a 20 minute intro to the game that includes pregen characters.