Had enough with the great Lucas tinkering with Star Wars? You might not remember all these scenes from Return of the Jedi but fear not, this time it’s not Lucas but Break, having ago at re-working things. Yes, there’s a dancing slave Leia.

As it happens, this blogger can recall a previous Break video that featured a dancing slave Leia – Tonight I’m frakking you remains popular on the site with plenty of people searching for Alessandra Torresani pausing to watch the vid. This time around it’s Ashley Pitman as slave Leia and if you’re keen you can follow her on Google+.

Oh; there’s a Maroon 5 parody in here too!

[Slave Lea]
My little bro, is a jedi knight
and you got my man stuck in carbonite
So fat and greedy
Prolly got diabetes
Like Willfred Brimly

You put me in this slave outfit
My little bro will see this
Can’t believe we kissed
Ohhhhhh oh oh!
I think he liked it

Did you make it this far? Type in the comments below:
DIABETUS! 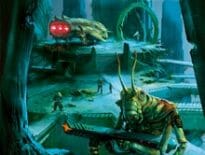