You are here: Home / Geek Stuff / Cool Tech / This is a pocket chainsaw; works against trees but what about zombies? 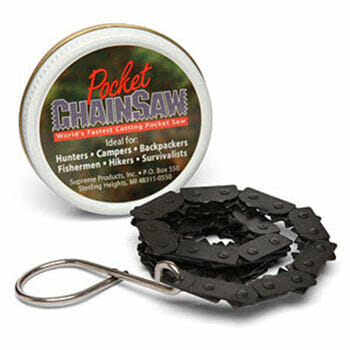 The concept is pretty cool, really, a chain in a tin – except the chain is a series of spiked links; exactly like a chainsaw. You loop it around your intended campsite fire and then ruffle it backwards and forwards.

What about with zombies, heh? Still some work to do on the design, I think!

If you’re wondering about the specs – Think Geek says it’s 28 inches in length and can cut through a 3″ limb in under 10 seconds. 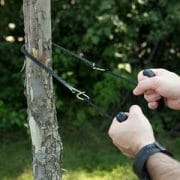 That raises a few questions – by “limb” are they sticking with their tree scenario or have they “branched” out to something else? I would draw their attention back to the zombie question if that’s the case.

Also; by “10 seconds” are they counting very lazy geeks like myself who might struggle to open the tin in less than 10 seconds – unless they had suitable zombie attack motivation.

Think Geek also suggests you can use your fingers to control the chainsaw if you want. You can stick your fingers into the hoops on the end of it. Really? It’s not all that common to see the retailer encouraging customers to explore chainsaws with their fingers. However, Think Geek do go on to stress that hooks can be used to control the chainsaw when there’s a bigger job to tackle.

Frankly, I’m beginning to doubt you can deploy this chainsaw as a zombie killing weapon at all!

This is a pocket chainsaw; works against trees but what about zombies?