You are here: Home / Games / Tabletop & RPGs / The One Ring: Adventures over the Edge of the Wild RPG review 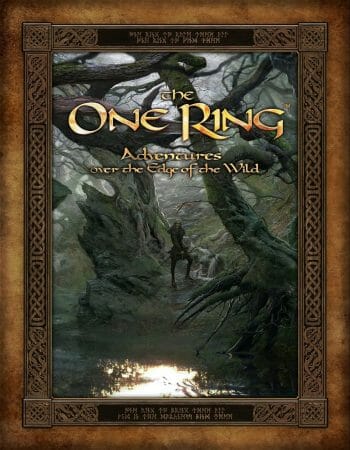 I think we all have our own take on Lord of the Rings. We now even have a generation of geeks who may have seen the fabulous movie adaptation before reading the books (if they’ve read the books at all) and they will certainly have a different view of Middle Earth than me. I was ready to pre-judge the game and prepared to splash my cash just because it was it was a Lord of the Rings roleplaying game.

Imagine my shock. The One Ring RPG does feel Middle Earth to me. It feels like my Middle Earth. For example, there is the notion of corruption. Characters risk collecting Shadow points should they experience distressing events, stay too long in a corrupted area, take possession of a tainted item (ring any bells?) or, of course, commit vile acts themselves.

The dice system too is designed to work with the grim and gritty aspects of Middle Earth. On the d6 that come with the game the numbers 1, 2 and 3 are empty. These values normally count towards success when a hero makes a roll – but if that hero is counted as ‘weary’ then they don’t. This is a very simple way for players and GMs (or Loremasters as they’re known in this game) to keep tiredness front of mind.

I’m not suggesting that The One Ring RPG is a dark roleplaying game. This is not Call of Cthulhu in fantasy form. I’m simply pleasantly surprised this aspect of the world setting is handled so well. As you start to flick through the twin books (and two maps) you pick up the Tolkien-esq fantasy vibe straight away. It’s this “familiar” Middle Earth feel that matters the most. The books ooze it. 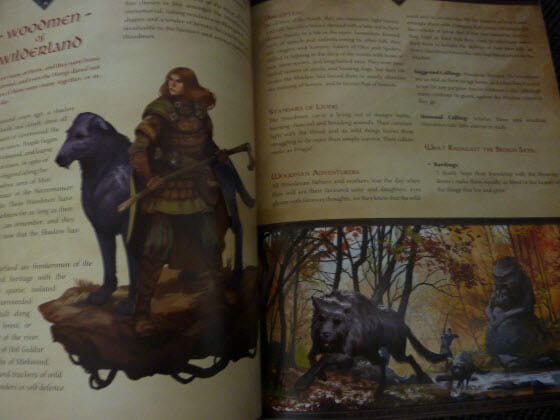 The One Ring RPG comes from Sophisticated Games. I believe they managed to win some board game rights. Wisely, Sophisticated Games reached out to a specialist, selecting the formidable Cubicle Seven, for assistance. Indeed, I see familiar names like Dominic McDowall-Thomas and Jon Hodgson among the big credits. The author and designers credits, however, are less familiar names: Francesco Nepitello and Marco Maggi.

Inside the front cover we had the line; “Venezia, 24 Maggio 2011” – and I’m not clear whether that means the book was written in Venice or whether that’s for the dedication. I’ve been to Venice and I have to say that although the city is about a million miles from the wilds of Middle Earth it seems like an appropriate place to try and continue the heritage of a work of art that is the Lord of the Rings and Hobbit books. If English is Francesco’s second language then there’s no trace of that in the books. Sure, we had Sarah Newton as proofreader and I’m sure other helpers among the playtesters but I really had no problem with the contents. 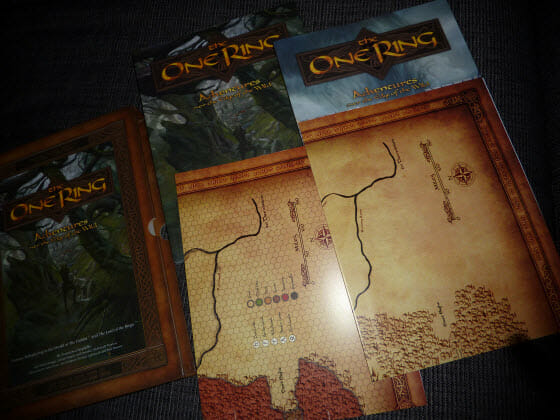 It’s also worth noting that the visual appeal of the game is a good one too. The box set contains two paperbacks, two maps and a dice tray. The great thing about the die (d6s and one d12) is that they use some special symbols that also help encourage the feel of Middle Earth and yet it’s easy to use normal die for the game. You’re not stuck in a custom die buying scenario. On the “success die” front a normal d6 will do, just keep in mind that a roll of 1 to 3 doesn’t count for a weary hero and a 6 is marked with the “tengwar” symbol. That’s the symbol that’s added up if degrees of success are a necessary part of a skills challenge. The “feat die” is a d12 and to adapt it the 11 becomes the Eye of Sauron symbol and the 12 becomes Gandalf’s Rune.

The One Ring RPG needs to be one of those roleplaying games that caters for beginners. There can’t be many of those titles left – but Lord of the Rings is certainly one. This intro is not so long as to bore the rest of us, even if we decide we’re going to re-read it. I didn’t have a non-gamer handy to hand the Adventurer’s book over to and ask whether they understood the concept – but I think it’s safe to say that this section does what it needs to do. 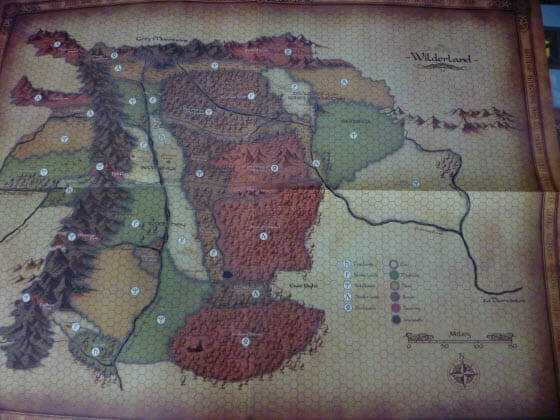 The important, I think, point of the Fellowship Phase is that the characters get to see the consequences of their actions and get to feel as if they’re in a chain of significant events. For example, if the kill the troll boss then they get to see that the troll menace stopping farmers from pushing north vanishes. It means they’ll be more invested when something starts to leave gutted sheep carcasses behind on the newly established farms. 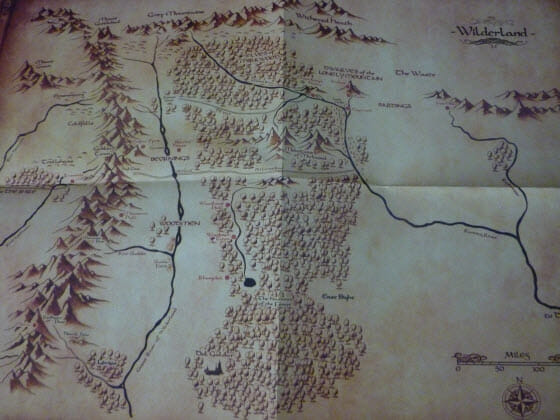 The One Ring RPG is set in the years between The Hobbit and Lord of the Rings. The Necromancer has been forced to retreat, the dragon has been defeated and some of the free folk are growing in strength but the wise feel the existence of a sinister threat. This is a time when mankind can push back the trolls… only to discover that there’s still a mysterious killer still terrorising the area who had been using the trolls as cover.

The game makes it easy to create a character that fits in with the setting. You begin with a cultural template and if you can’t decide on some details you can roll. As it fairly common for Lord of the Rings different human tribes are counted as different races and the PC list includes; Bardlings, Beornings, Dwarves of the Lonely Mountain, Elves of Mirkwood, Hobbits of the Shire and Woodmen of the Wilderland. This selection is important and a lot of mechanics and advantages resolve around this. 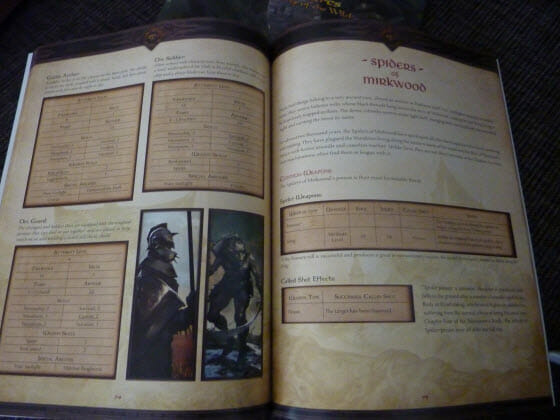 The Loremaster book is as you’d expect; tips on running the game and a sample adventure. Early on the book talks about the Loremaster as the Director and this is a good idea – The One Ring really seems to be a cinematic RPG, one where the sequels in the series pick up months or years after the last adventure.

Lord of the Rings is a bit of a road movie. This is often very hard to handle in an RPG. On the plus side The One Ring accepts this and tackles this full on. We’ve sections on getting the players to pick their route on the map (and the RPG set comes with maps) and systems for the Loremaster to work with that. However, my concern is that players are likely to change their planned route at the first prompt. I don’t think this defeats The One Ring’s system… I think it just adds a layer of complexity for the Loremaster to cope with.

As way of summary, let me say that this is not a play test review – this is a first impressions and poking at the fine print review. I was surprised by the book and I know that pleasant surprise carried The One Ring further than I expected but despite that I’m happy to describe this as an intelligent, advanced and self-contained RPG. It’s certainly worth buying! 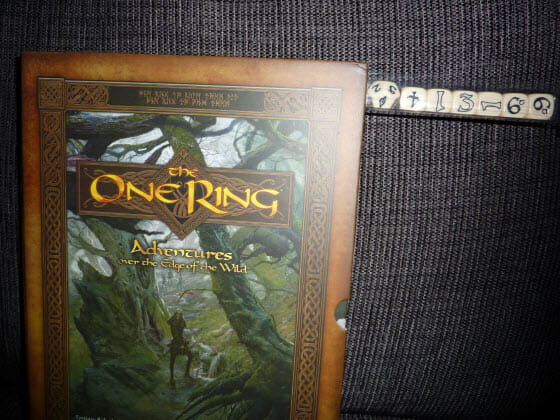 The authors, I believe,  are the creators of the fantastically great “War of the Ring” boardgame series of games, published under Nexus in Italy, Devir in Spain & Fantasy Flight Games in the US.  The quote in Italian is a date & a locale (Venice).

I did enjoy a great deal of the book, but sadly I found the game mechanics to be a bit dated, most RPGs are trying to streamline there games, make them easy to pick up, I felt the combat rules just slowed the game down. I do think that once you got used to it, it would speed up, but it felt too cumbersome to me. Not a game for fresh face roleplayers, unless they had a hugh amount of background knowledge of the setting, and the Bell Marsh was rubbish, read like a old D&D game from the 80’s

The One Ring: Adventures over the Edge of the Wild RPG review