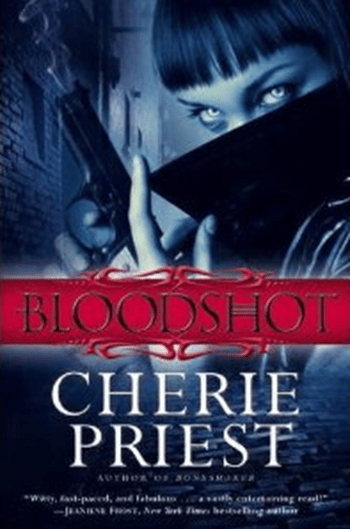 Bloodshot is a vampire novel from Cherie Priest. Back in July I was able to interview Cherie about Bloodshot. It’s a few weeks later so time to share a reviewers thoughts on her book.

I doubt I would have picked Bloodshot up from the shelves simply because it is another vampire novel. Harsh? Perhaps. As I started to read through Bloodshot I had the hunch that Priest may well have been all too aware of. Early on there’s a short commentary from our vampire hero on why some authors like to write vampire books.

Make no mistake, though. This is not a shiny vampire meets teenage angst book. This is an international thief meets government conspiracy vampire book – and those tend to be much better.

Our hero, the international thief, has some quirks to her set up. The first, of course, is that she’s a vampire. She’s fairly modern, at home with technology and for a twist the world police assume she’s a man. By itself that gender confusion may have been happily settled as a nod towards sexism in international criminal operations and law enforcement (hey; sexism can exist anywhere) but later on we recruit a transvestite ex-navy seal. Intended or not; there does seem to be some exploration of gender identity and gender roles here in Bloodshot.

The other significant catch with our vampire thief is that she’s nearly mad. I don’t mean in a zany way. She seems to suffer from mild forms of obsessive compulsion and paranoia. The book begins with Raylene sweeping one her safe houses, checking in cupboards, in reaction to be delivered an unexpected letter. There was every reason to be concerned the safe house was breached but no reason to suspect there was a boogieman hiding in the loo.

The action starts quickly enough. That’s important as this is the first book in the series and there is a danger of being lost in the character building, exploring years of vampire history and setting up the plot. Instead we have the immediate reaction to the unexpected letter as a way to learn about Raylene. The fallout from the letter is quickly combined with a second interruption to Raylene’s previously carefully controlled world and is through these two events that we learn about her and the supporting cast. There are no flashbacks or recaps of note.

I think that’s the right pace. It works for me. Bloodshot gives you reasons to keep on turning the pages – and Priest’s easy to enjoy writing style is one – as we want to see what happens next. That comes at a cost, though.

The price? We’re teased on the existence of vampire Houses, of their politics and intrigue but we don’t get to explore. We’re even teased on the existence of other supers. It’s the supernatural politics that’ll lure me into a series featuring the undead so this is quite a dangerous game to play. However, just as the book begins with some reassuring comments (smuggled into the action) that this is not an angst fest the book concludes with the promises readers will get closer to the supernatural shadow world if they stick with the series.

Raylene is a loner; a vampire who doesn’t see a place for herself in the traditional world of vampires and ghouls. Ghouls are ex-humans who drink vampire blood and earn a place at their side. This isn’t a vampire novel that screams Vampire: the Masquerade at you. It’s not like Underworld. If you had White Wolf initiate you into the undead realm then it’s hard to ignore overlaps, ghouls may be one but there are very few others in Bloodshot. This is an original piece.

It’s this self-inflicted separation, perhaps due to her paranoia, that makes the vampire Raylene an interesting hero to follow. You just know her choice will put her in conflict with hosts of others and that she won’t have many allies to help her out of the fire. Most of all, despite her quirks, Raylene becomes a character you’ll find yourself rallying behind. You want her to win. You want her to survive.

I enjoyed Bloodshot. It’s a thriller first and foremost. Sure; there are touches of horror, comedy, tech and romance but these are all safely tucked into the bigger picture and act as seasoning for the bigger picture. Cheshire Red is the name given to our vampire thief by the world police and the name of the series. It’s one to watch.

Disclosure: My copy of Bloodshot was provided by publisher Titan Books. 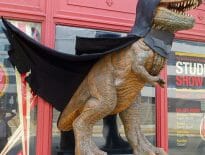